The 1964 Paralympics in Tokyo is considered the turning point not only for disabled sports in Japan but also for volunteers who assisted athletes and officials as interpreters at a time when wheelchair users were rarely seen in public in the country.

As Tokyo prepares to host its second games after 56 years, some of the former volunteers are hoping to make another impact. Meanwhile, their experience has inspired the younger generation to take a leading role as the games approach.

Akiko Wakai, 77, and Mutsuko Inada, 76, were among the interpreters who offered assistance during the five-day Paralympics in November 1964, which featured about 370 athletes from 21 countries. 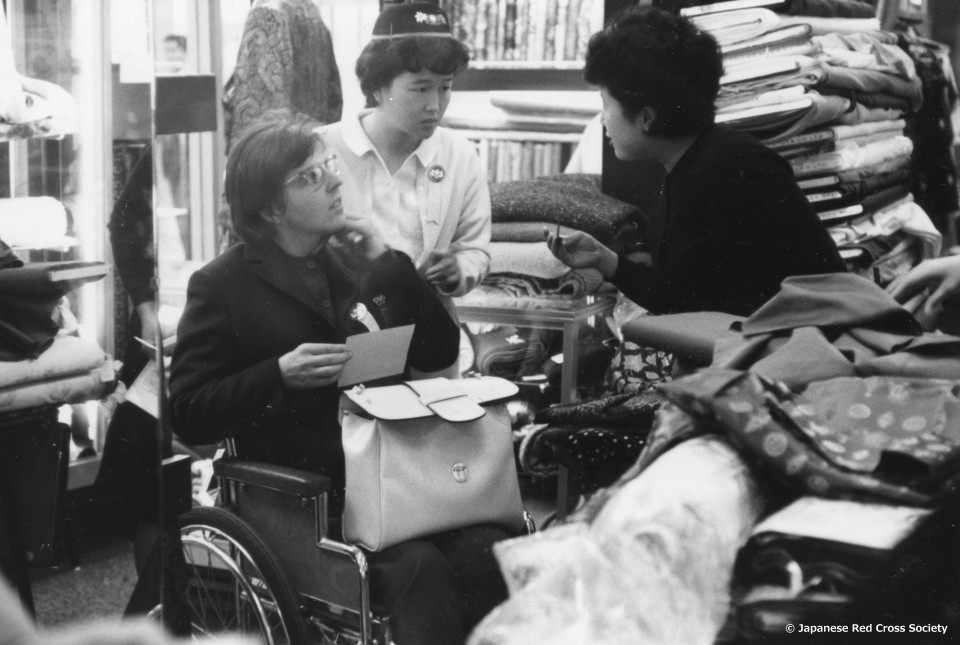 They were members of the Japanese Red Cross Society's language service volunteer group, formed upon the request of local organizers to assist athletes and officials from overseas. The group of 156 people, mostly university students, familiar with a total of 14 languages was assembled mainly by word of mouth.

"I was assigned to help the Swiss national team, so I accompanied the athletes to the venues every day and helped them get accustomed to life here (in Tokyo)," Inada told Kyodo News in a recent interview. "I also accompanied them shopping and went to a tempura restaurant."

"It was really fun and fulfilling. There were times when I wondered if my English was understood, but I managed to get through by using hand gestures," said Inada, who was a member of her university's English-speaking club at the time of the games. 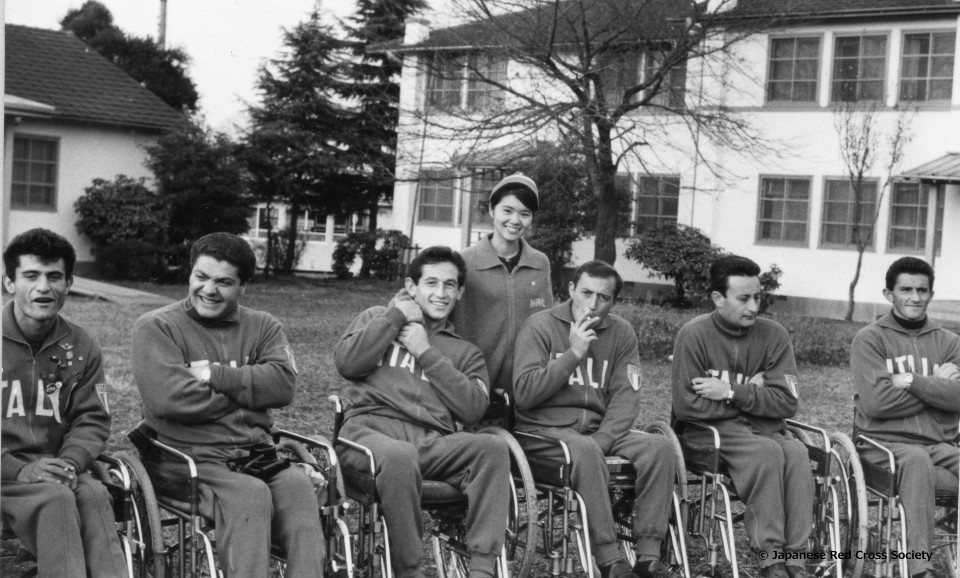 The language service volunteers worked both on and off the field. Some accompanied national delegations during the games, while others made English announcements at venues or organized a recreational facility where athletes could socialize.

The 1964 Paralympics had nine sports for athletes with paralysis in their lower bodies. While the Paralympics received little attention compared with the Olympics, the games shaped the future for disabled sports in Japan, leading to the establishment of the Japanese Para-Sports Association.

"Back then, we rarely saw people in wheelchairs. Most of the Japanese athletes lived in medical facilities and came to the games from there," said Wakai, the leader of the language service group.

"We weren't biased, but we thought that's the way it was (also with athletes from overseas). But we were taken by surprise," she said. "Many of them were independent. They had jobs and families."

Wakai's Paralympic experience has driven her to work with fellow volunteers ahead of the 2020 Games.

Two years ago, several former volunteers founded a group that organizes opportunities for Japanese families to host people with impairments for chats over afternoon tea and snacks.

The 41-member group, called the Association for Language Volunteers Legacy from '64, has linked up roughly 20 families and 30 visitors from countries such as Nepal, Sri Lanka, and South Africa. Hosting them allows local people to learn of others' experiences while also thinking about accessibility in their homes and neighborhoods, said Kyozo Gunji, a founding member of the group. 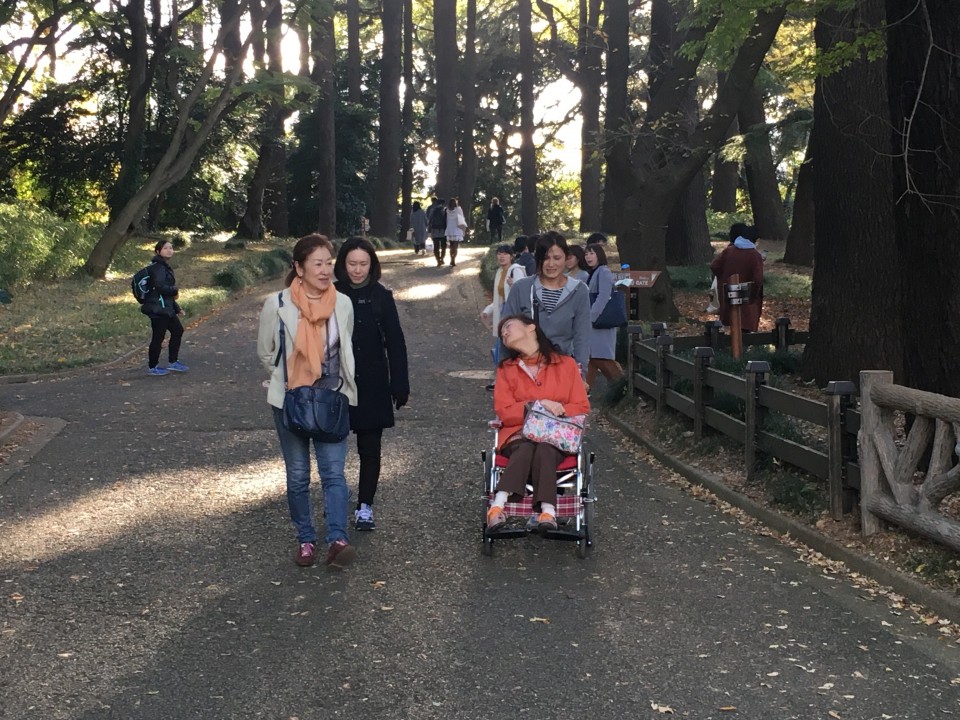 "We've all aged since the 1964 Paralympics, and we wanted to share our experience with the younger generation who are unfamiliar with those games," Gunji, 76, said. "Rather than attending lectures and reading the news, we thought meeting people and having a conversation is the best way to learn."

The tea sessions have an audience. The group invited a visually impaired student from Taiwan to a Tokyo home in June, who conversed with locals for about two hours over rice crackers and chocolates.

The association has also held seminars with Paralympians. Alpine skier Kuniko Obinata, a five-time Paralympian with 10 medals, and powerlifter Masaharu Ishihara, who competed in wheelchair basketball at the 2000 Sydney Games, spoke. 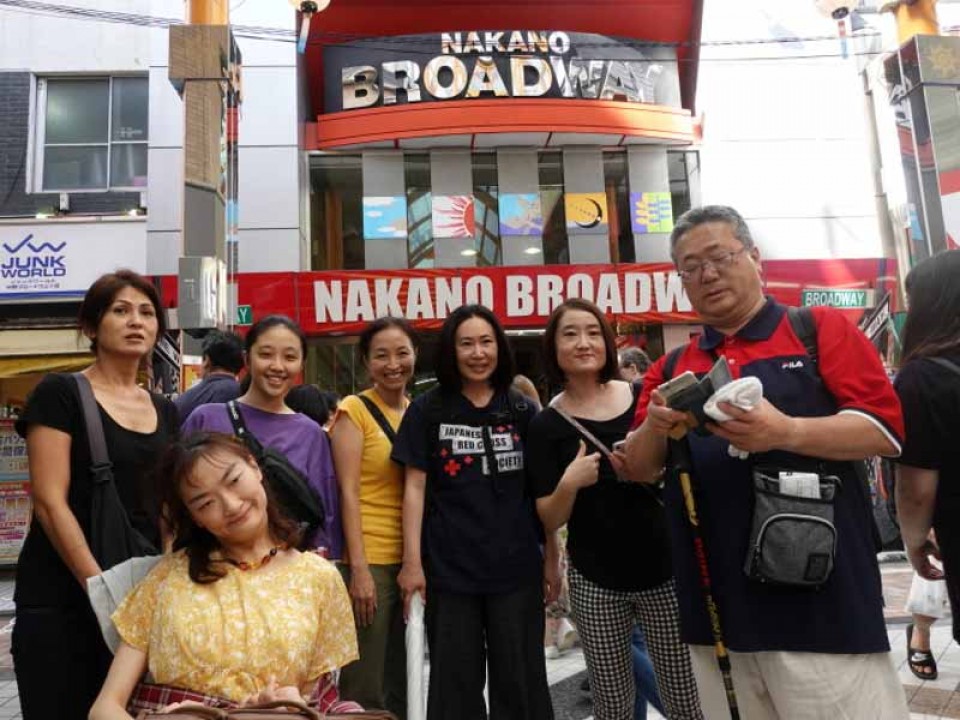 Meanwhile, the Japanese Red Cross Society's language service volunteers remain in action, eyeing a new legacy as their predecessors did five decades ago. The team currently has about 260 members between their teens and 90s.

More than a dozen members have started interpreting at Para sport events in the lead up to this summer, hoping to help sports without enough corporate sponsors and volunteers.

"We originally wanted to volunteer at the Paralympics, but we couldn't do so as a team. So instead, we approached individual sports bodies," said the group's leader Kazuo Ashimura, 55.

"I didn't know about the group that volunteered at the 1964 Games until joining the team," he said. "But listening to their experience has inspired me. They were volunteering with a strong sense of mission."

The language service team has also been publishing information online about the accessibility of tourist spots and train stations in Tokyo and the surrounding areas. 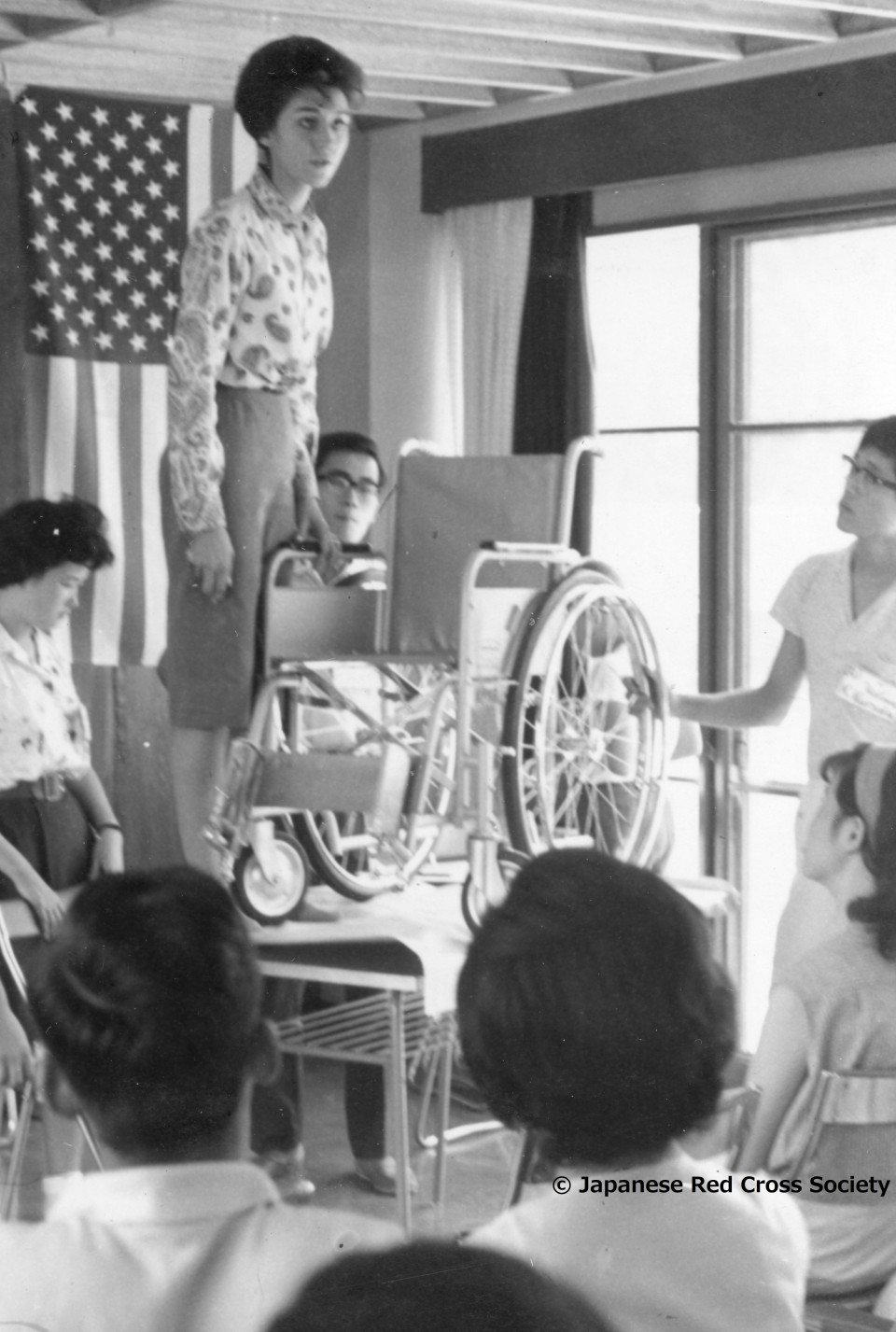 Their website, Accessible Tokyo, provides information about elevators, road surfaces and parking lots designed for people with disabilities at popular locations such as amusement parks, temples and museums.

The volunteers visit the spots about once a month with a wheelchair user to update and gather new information. As the 2020 Games near, they expect their tips to come in handy for those visiting Tokyo from other parts of Japan and abroad.

"About three or four years ago, I expected Tokyo to become more accessible ahead of 2020, and our project wouldn't have been needed," said Shinichi Nakakubo, the vice president of the volunteer group. "But it didn't go the way I thought. So we will continue this project even after the games and keep updating it with new information." 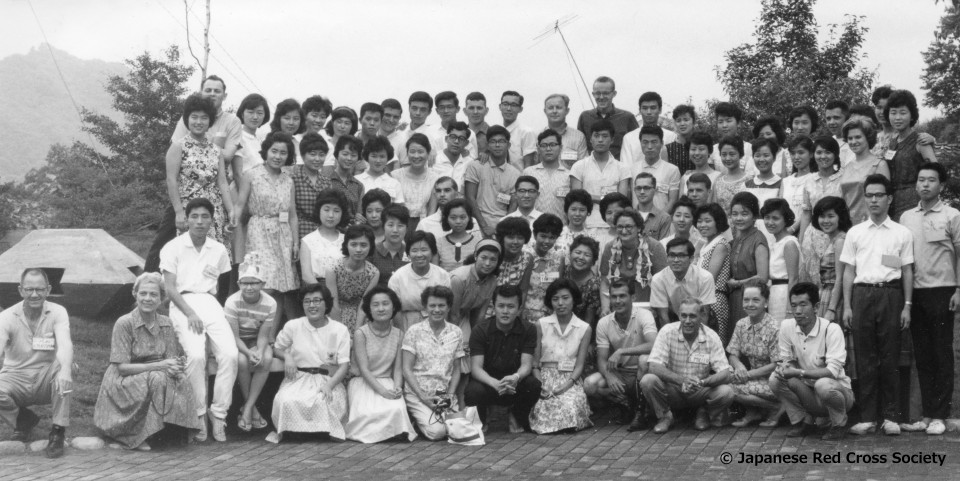 The organizing committee started training for about 80,000 people last fall who wish to volunteer to guide spectators or provide operational support at the Olympic and Paralympic Games. They will be officially recruited this spring when they receive their assignments.

At the 1964 Games, however, the JRCS had to start from scratch. Wakai and Inada recall how the volunteers developed their own training methods since no manual existed. They asked native speakers of English for lessons and visited a medical facility.

"We learned many things: from medical terminology to how to handle a wheelchair -- things we'd never really learned at school," Inada said. "Thinking back, we were all very inspired. We were optimistic and excited."

The hard work appears to have paid off. With the Paralympic Games returning to the capital, the two hope that it will bring a new legacy and another eye-opening experience for those with roles at the games. 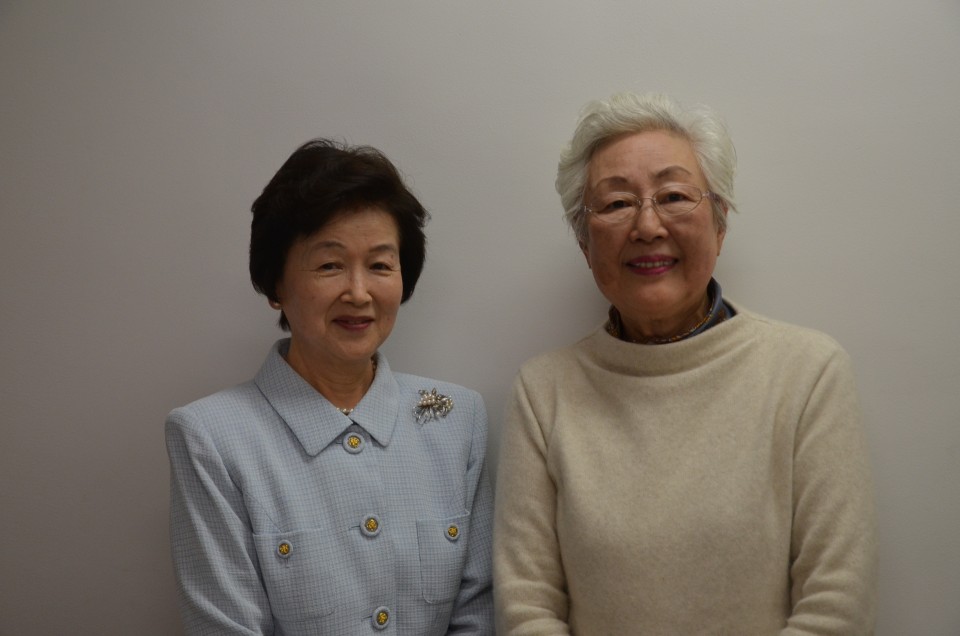 "Volunteering has become a part of my life," Wakai said.

"I hope people -- whether they be athletes, volunteers or spectators -- join hands. There are many things they can learn from each other, and the thought of doing something together is the most important."