Mizuki Matsuda won the Osaka Women's Marathon, a race which doubled as a qualifier for this summer's 2020 Tokyo Games, for the second time in three years on Sunday.

Matsuda dominated the World Athletics Gold Label road race and crossed the line at Yanmar Stadium in 2 hours, 21 minutes, 47 seconds, moving a step closer to Olympic selection by clearing the qualifying standard of 2:22:22. 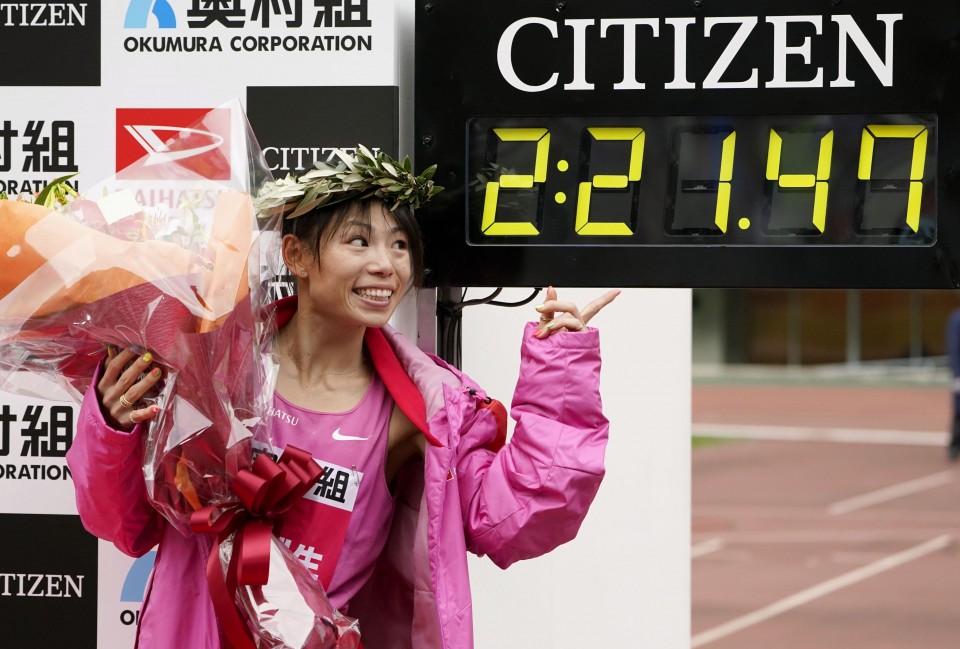 "This is surreal. I'm really happy," said Matsuda, who is aiming for the third Japanese spot on the Tokyo Olympic team.

"I saw my coach and mom, who rarely cry, crying and that made it all worth it. I trained so hard I was ready to quit if it didn't go well today, and I stood at the starting line ready to enjoy the race," she said.

The 24-year-old Matsuda won her marathon debut in her hometown Osaka two years ago in 2:22:44. She finished fourth at the Marathon Grand Championship last September, where the top two finishers were automatically selected for the Olympic marathon team.

Rei Ohara had a provisional place on the 2020 Olympic team after placing third at the MGC Olympic marathon trials, but she got knocked out when Matsuda turned in a sub-2:22:22 performance.

Ohara finished 13th in 2:28:12. Kayoko Fukushi, seventh in the MGC, had to withdraw from the race after reaching 25 kilometers.

The Osaka Women's Marathon was the second to last opportunity to clinch the third and final spot to compete in the Olympic marathon in Sapporo. If no runner runs faster than 2:21:47 at the March 8 Nagoya Women's Marathon, Matsuda will secure the team berth.

"I was targeting a national record so I give myself a passing grade but I had hoped for a better time. I pray that my coach (Miwako) Yamanaka and I'll be able to go to the Olympics together," Matsuda said.

Mizuki Noguchi holds the Japanese national record of 2:19:12, which she set at the 2005 Berlin Marathon.