Being surrounded by the sounds of mooing is just one of the perks of the job for Daisuke and Nana Shimizu, a young couple running a dairy farm in a village in Japan's northeastern Fukushima Prefecture.

Although the wider Tohoku region has been recovering from the massive earthquake and tsunami that struck in March 2011, the reputation of farm produce from Fukushima has remained tarnished by the nuclear crisis triggered by the disaster. But the Shimizus hope to repair some of that damage with their specialty Jersey milk.

The couple's Farm Tsubasa is located in Samegawa village, which sits roughly 100 kilometers away from the crippled Fukushima Daiichi nuclear power plant that spewed radiation over a wide area of the countryside. The farm draws its name from the second Chinese character in Daisuke's name, which means "wing," but it has less to do with birds than it does with cows -- Jersey cows, to be exact. 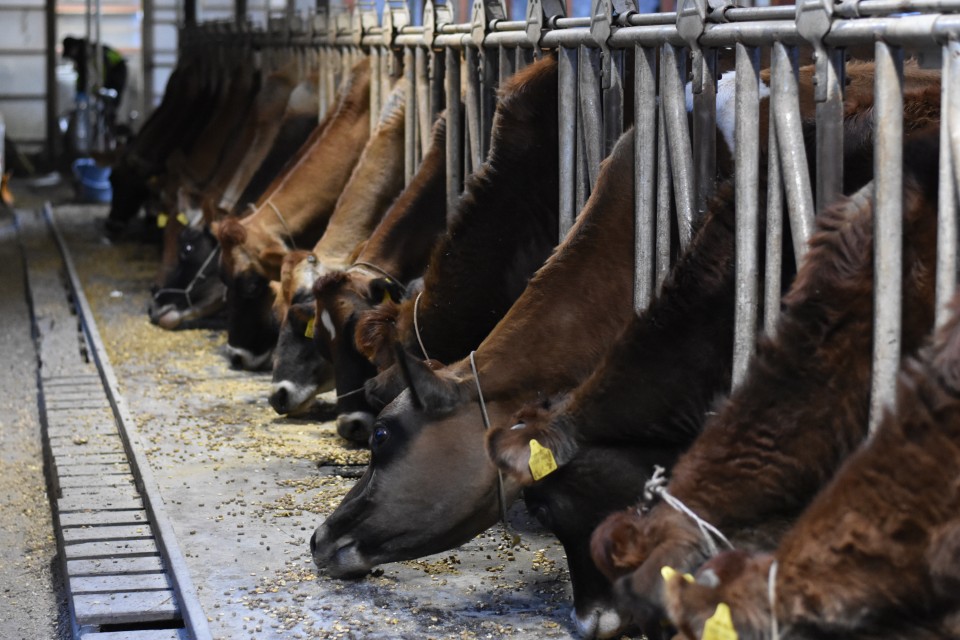 A breed of small dairy cattle from the Channel Islands, an archipelago in the English Channel off the Normandy coast of France, they are gentle animals that produce high-quality milk richer and creamier than other varieties.

"We want to be a symbol, a model, for children...who want to try their hand at dairy farming or agriculture," Daisuke said.

The 32-year-old boasts that unlike 99 percent of cows in Japan, which are of the Holstein breed, all the cows on Farm Tsubasa are Jersey.

The farm, which started in 2012 with just two cows, now boasts a herd of 23 adult cows and 10 calves. Originally an animal therapy project of his father's nonprofit organization, which provides support for troubled Fukushima youth, the farm became independent in 2017 with the newlywed Daisuke and Nana at the helm.

Even now, a group from the organization comes once every few months to help out on the farm and play with the animals.

The calves are kept in a cowshed, but the adults are free to roam within the farm grounds during the day, munching on fresh bundles of grass delivered daily by truck. 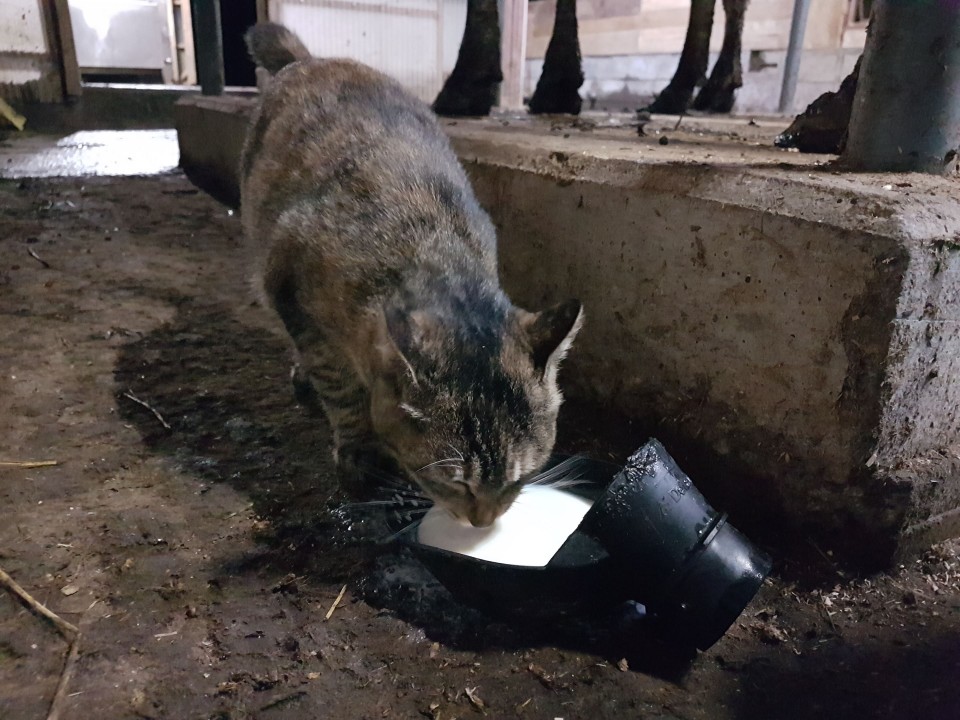 The couple says this freedom and a grass-focused diet help the cows at Farm Tsubasa to produce high-fat, natural-tasting milk that "slides down your throat."

"The cows can do what they want, when they want. We try to create an environment where the cows can move freely, with as few limitations as possible," Daisuke said.

By not putting any strain on them, the couple hope their cows can produce higher quality milk for longer.

But despite being given free rein within the fenced farm grounds, the cows are not able to graze outside the perimeter. That is because their diets need to be monitored as the public are still apprehensive when it comes to farm produce from Fukushima.

Monitoring the diet of dairy cows is more important than that of beef cows, Nana explained, because milk from different cows is mixed together. If there are any issues with the diet of a specific cow, the whole batch must be thrown out. Beef cows, however, can be individually inspected before consumption to confirm safety. 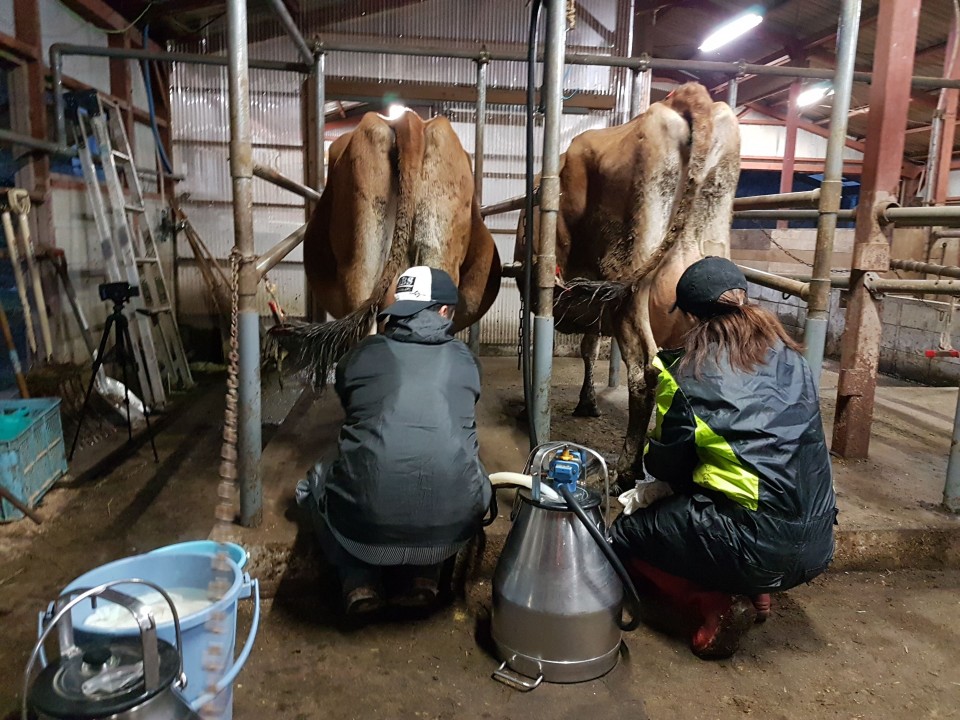 (Daisuke and Nana Shimizu, the young couple running Farm Tsubasa, work together to complete the evening milking of their cows)

The local agricultural cooperative currently bans dairy farmers from allowing their cows to graze freely to avoid any potential issues with the milk. The cows must be fed grass imported from the United States and Canada, mixed with local grass that has been inspected and deemed safe.

Although the soil and grass at Farm Tsubasa have been given the all clear on radiation levels, the couple agree with the regulation to allay public fears.

"We understand that it is more important than anything that food safety comes first, so we consider the agricultural union's decision to be correct," said Nana, 32, who came to live on the farm in April 2017 after marrying Daisuke three months earlier that year.

The couple, who met while attending a veterinary university in Kanagawa Prefecture, didn't start dating until they reunited a few years after graduation. They maintained a long-distance relationship, as Nana was then employed by a chemical firm in her home prefecture of Yamaguchi, western Japan, before getting married.

Although Nana says her life now as a dairy farmer enables her to "feel the sensations that everyone," with the exception of farmers, "has forgotten," building her support network was difficult and parting with cows is often emotionally draining. 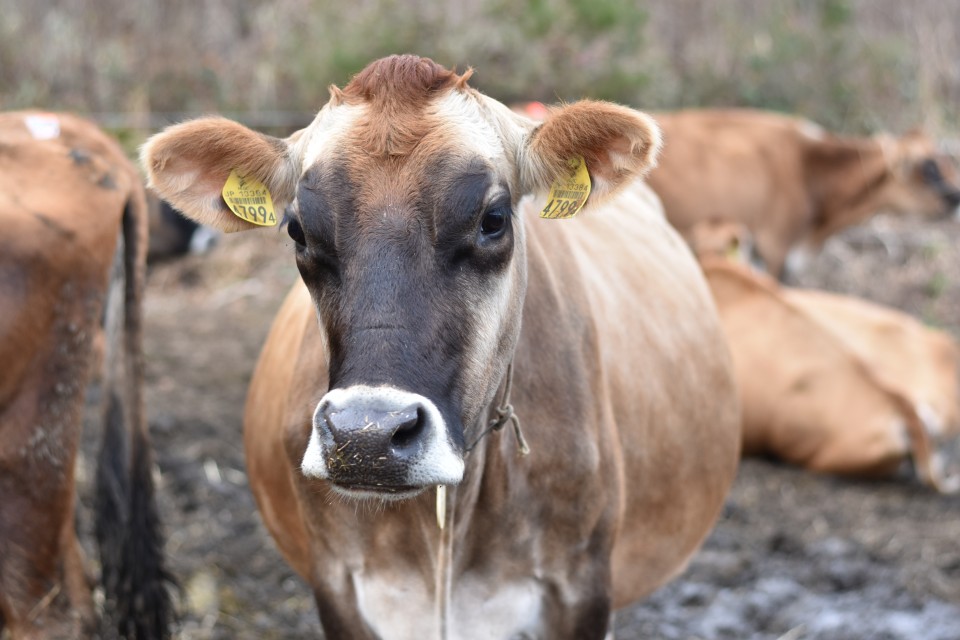 (A gentle and curious Jersey cow poses for the camera)

While cows kept purely as pets have a lifespan of around 20 years, those bred for milking last only four years before they are deemed no longer productive and sent away to be butchered, she says. But due to the care given to the animals at their farm, they have an 8-year-old cow that is still active in producing milk.

At Farm Tsubasa, the cows are milked one by one, using a combination of hand and a portable milking machine. The bucket milker is connected to a vacuum source, and a claw comprising of four stainless steel cup shells are attached to each teat to draw the milk out.

The cows, which appear relieved to lighten their swollen udders, are generally eager to be milked, Nana says. Especially since they know they will be rewarded with fresh grass to munch on afterward.

The milk is used in the farm's own brand of dairy products, which includes bottled milk, cheese, soft serve ice cream, and butter. Although the products are mainly sold in Fukushima, the couple occasionally travel outside the prefecture to sell their goods at events.

Jersey milk products are well-received for the most part, Nana says, but there are still a few consumers who steer clear of Farm Tsubasa's offerings when they learn where they're from.

"In a day of selling, there will maybe be one person," she said.

But the couple are not going to let such challenges deter them. They dream of the day their cows can graze freely once regulations in the prefecture can be relaxed. The farm is a labor of love they have chosen, as they hope their dairy goods will help revitalize agriculture in Fukushima.

"We want to show (aspiring farmers) how happy we are doing this even after we become a grandpa and grandma," Daisuke said.