Midori Ogino champions breastfeeding as a biological gift that helps newborns survive and thrive. Making breastfeeding the cultural norm is a time investment, she says, but it is an investment that pays back many times over.

She is a "lactivist" not because she pushes breastfeeding at all costs, but because she thinks it is time governments invest in breastfeeding, make every drop of breast milk count and give mothers the care they deserve.

She knows of too many Japanese women who fail to reach their breastfeeding goals because of the various barriers placed in their way. Successful breastfeeding isn't a matter of luck, rather it is the product of practical knowledge and social support, she says.

"I'm not saying we should ignore women's choices or desires, but it scares me that millennial moms are repeating the 'formula is just as good' mantra. It's simply not true," Ogino says.

"In many cultures, childcare is not down to one mother, but a whole village. Public breastfeeding is a taboo in Japan, and women have to hide in the bathroom to feed their baby. This is how nursing is viewed in our society." 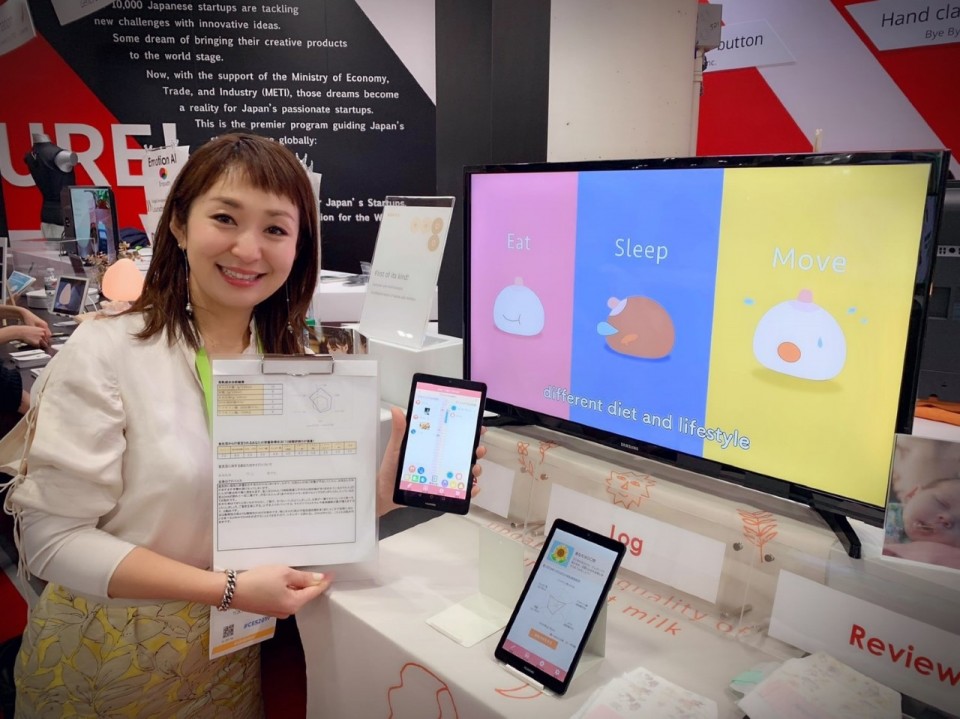 Breastfeeding is a natural act, but it is also a skill that takes practice. Arming yourself with legit facts about breastfeeding before the baby arrives is essential, but Ogino says every mother needs nonjudgmental support through her infant feeding journey.

In the absence of a village, professional support is vital to reduce feelings of isolation.

As the founder of Bonyu.lab, a company that measures the nutritional value of breast milk to help mothers produce the best quality milk for their babies, the 37-year-old Japanese argues that it is the way media frames breastfeeding as an individual choice that is the real source of the problem.

"Some say nursing is spiritual and question the ethics of testing human milk. For others, it's a feminist issue. I'm not saying formula is harmful, but I just don't want women to be fooled by the false information that's out there," Ogino says.

"I want them to make well-informed decisions regarding the breastfeeding of their baby. The first 1,000 days of the baby's life are the most influential in their development. All babies deserve the best possible start in life," she says.

In her other role as CEO of Brown Sugar 1st, Ogino has helped fuel the coconut oil health trend in Japan. She says public opinion is becoming increasingly pro-organic and anti-GMO, but views are still divided when it comes to breastfeeding.

She received bogus "advice" that sabotaged her efforts to breastfeed her only daughter and knows how these mixed messages about how to feed can leave a woman confused and overwhelmed.

Contrary to what the pretty pink nursery pamphlets or the celebrity "brelfies" on social media might suggest, breastfeeding is time-consuming, draining, difficult, and painful, especially in the initial trial-and-error days.

Many moms say they feel like a failure when their milk supply doesn't match their baby's needs, while dads can feel a little jealous as if they have been left off "the team" if they can't bring food and contentment to their baby in the same way.

By turning breast milk nutrition profiling into a business and organizing her first public breastfeeding last summer, Ogino isn't trying to ostracize the 1 to 5 percent of women who are physically unable to breastfeed.

Record 61% believe women should continue to work after birth: survey

But if doctors and health care providers are recommending breast milk substitutes without medical reasons and/or offering free formula samples, a woman needs to ask herself who is profiting from her "free" choice, she says.

Yoko Akan, a Japanese woman with a Turkish husband, says she is glad she didn't listen to her doctors or ignore her gut instinct when she was still trying to establish a breastfeeding relationship with her newborn baby.

"I hated how my doctor tried to coerce me into supplementing with formula because my son's weight fell off the growth curve. He was alert and active, and I saw no warning signs. I was so gung-ho the doctor let me have my way, but I had to fight," Akan says.

Akan, who has breastfed standing up on a commuter train and in restaurants including a ramen shop, says she makes plenty of milk in Turkey, but the stress she feels in Tokyo slows the flow.

"It's sad that many women, through no fault of their own, have to stop breastfeeding before they are ready to. These mothers are not failing, but rather, being failed by a government that hasn't been investing enough in maternity care," Ogino says.

"We're mammals. We're built to lactate. It's human biology. Breast milk is too good to waste. It's not just the magic contents but the skin-to-skin contact and all those lovely hormones you release."

A monthly subscription service, it offers a basic "bonyu check" kit that costs 9,800 yen (about $90). All the mother needs to do is fill out a health questionnaire and send frozen samples of her breast milk to a lab to understand what she is feeding her baby. 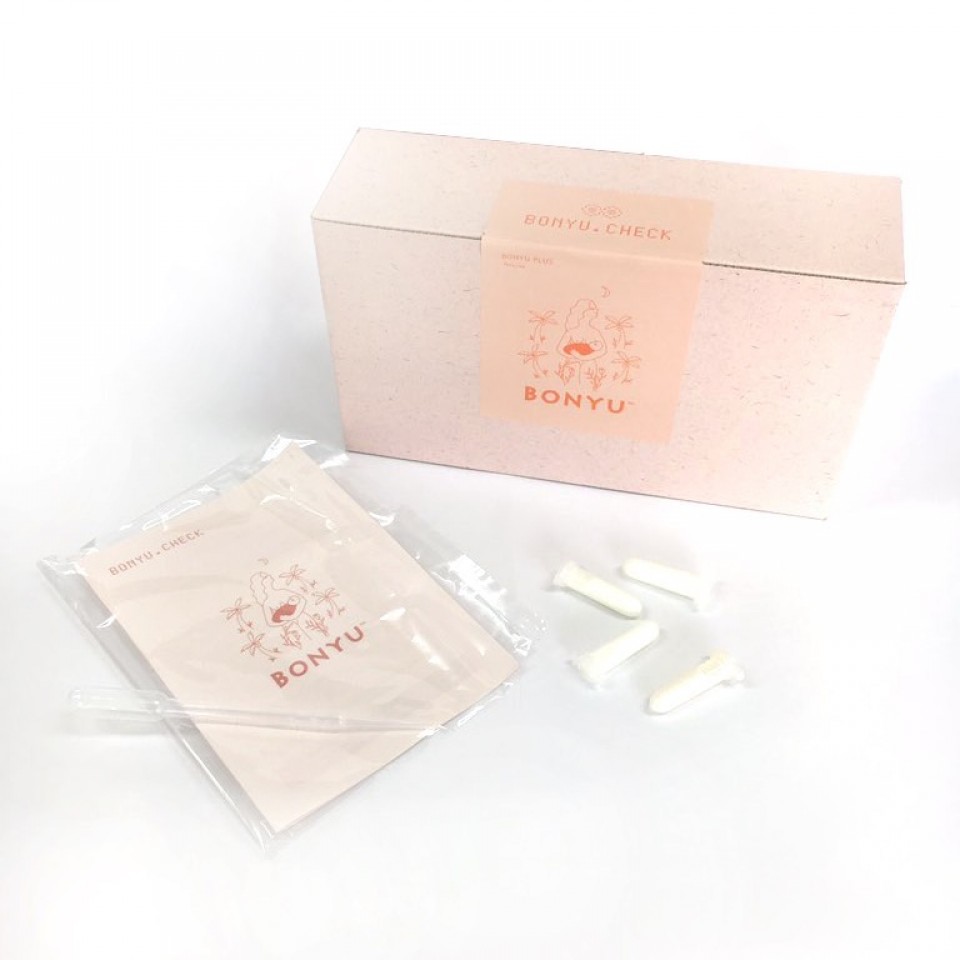 (A "bonyu check" breast milk test available in smartly packed kits for the at-home user in a photo taken in August 2019.)
[Photo courtesy of Midori Ogino] 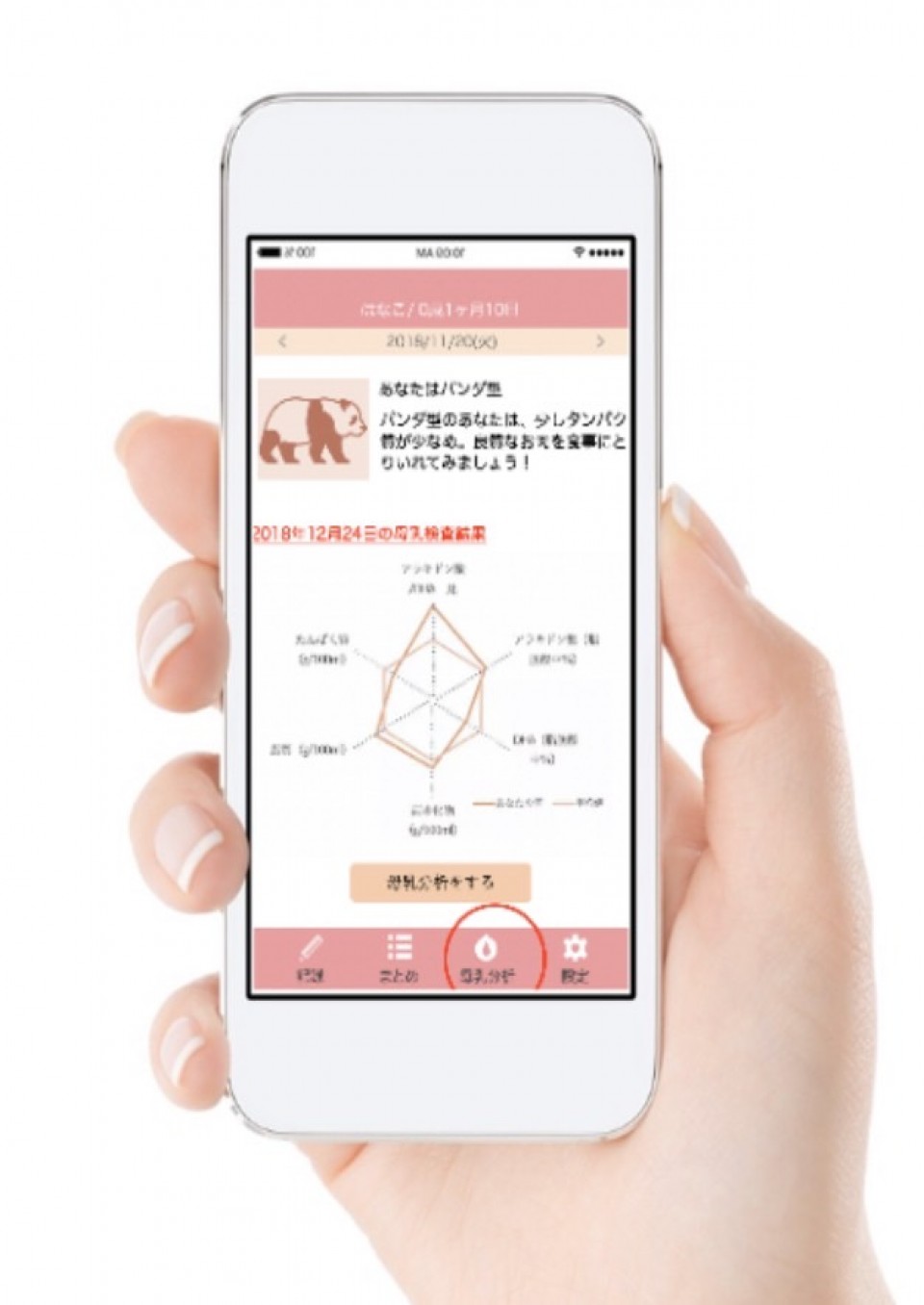 The testing lab is the brainchild of Ogino, who wondered if there was anything she could do to help nursing mothers take charge of their own bodies and breastfeeding outcomes.

When the mother is emailed her test results, she also gets practical nutrition advice from a dietitian. The samples are also used to evaluate the relationship between the mother's dietary habits and physical activity level and an infant's condition.

"There may be other companies that are measuring nutrients in breast milk, but we're the first company in the world to analyze subjective and objective data, study the mystery of a mother's milk and provide personalized solutions," Ogino says.

Ogino does not doubt that any woman who chooses to breastfeed should be able to do so anytime, anywhere, without shame or criticism. She feels the need to change the conversation around breastfeeding so that women can openly discuss their struggles.

Families, communities, and workplaces each have a role to play in affording women the time and space necessary for breastfeeding, she says. Breastfeeding promotes healthier moms, healthier babies, and thus healthier societies. It's a win-win-win.

"Today, the topic of how and when we feed our babies sets off a national debate. We need to be able to talk about breastfeeding and leave emotions out of it. Saying 'breast is best' is oversimplifying a complicated issue for mothers," Ogino says.

The World Health Organization recommends that babies be breastfed exclusively for the first six months of their lives and continue for "up to two years of age or beyond."

Apart from the added bonus of breastfeeding burning extra calories for the mother, exclusive breastfeeding is associated with reduced risk of breast and ovarian cancers, Type 2 diabetes, and postpartum depression, according to the WHO.

Breast milk contains antibodies, which help protect babies against infection, and it can also help prevent sudden infant death syndrome. Breastfeeding exposes your baby to lots of flavors, and it is said that children who are breastfed are less likely to be picky eaters. 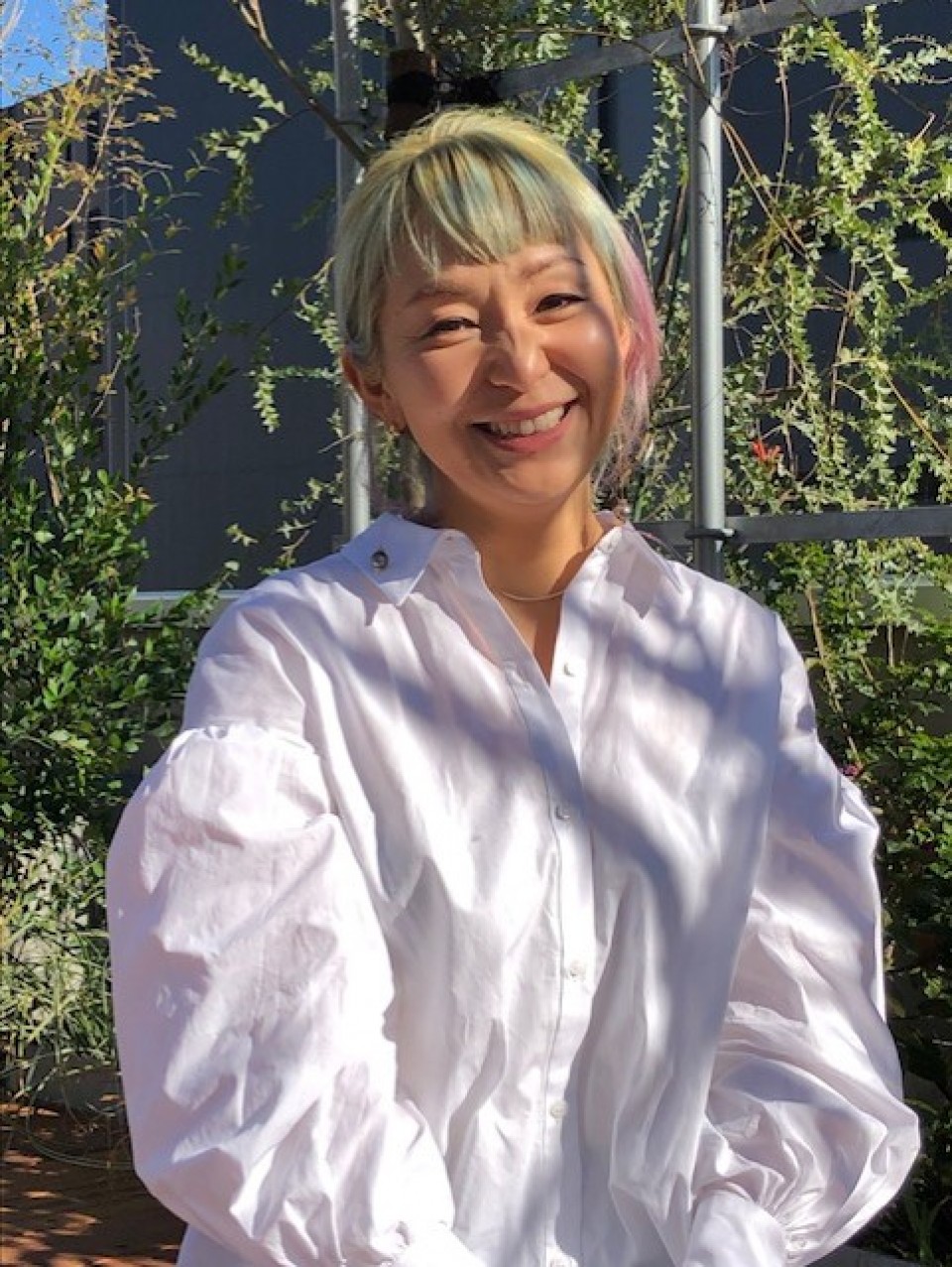 "I'm not saying you should be hell-bent on making breastfeeding work because I know the pressure to breastfeed can hurt moms. But I know in Japan, lack of breastfeeding support is often cited by mothers as one of the key reasons for premature weaning," Ogino says.

"Bonyu.lab is committed to being right by the mother's side so she'll feel empowered to breastfeed longer, with less stress and more enjoyment. We want to support these women because they're making health care decisions that aren't just for themselves."

Ogino warns consumers about the misleading labeling on formulas and asks them to consider the environmental cost of bottle feeding, like the amount of water and energy required to prepare formula, whether it be powdered, liquid concentrate, or ready-to-feed.

In an ideal world for Ogino, the value of breastfeeding would go uncontested, and 90 percent of all mothers on the planet would do so, even with the help of a breast pump or some formula feeds sprinkled in here and there.

According to the WHO, only 41 percent of infants were exclusively breastfed in the first six months of life in 2018 as recommended, far short of its 2030 global target of 70 percent.

"Women cannot breastfeed alone. Breastfeeding isn't only about the act of feeding. We all play a role in supporting breastfeeding. It's a collective societal responsibility," Ogino says.

"The important thing is that women don't face societal pressure and unrealistic expectations of motherhood. Women shouldn't have to choose between breastfeeding and returning to work. The two activities can coexist."

We need to ensure our governments create an optimal environment for women and children to thrive, and all of us need to be involved in safeguarding their right to breastfeeding, Ogino says. After all, we all come from our mothers.