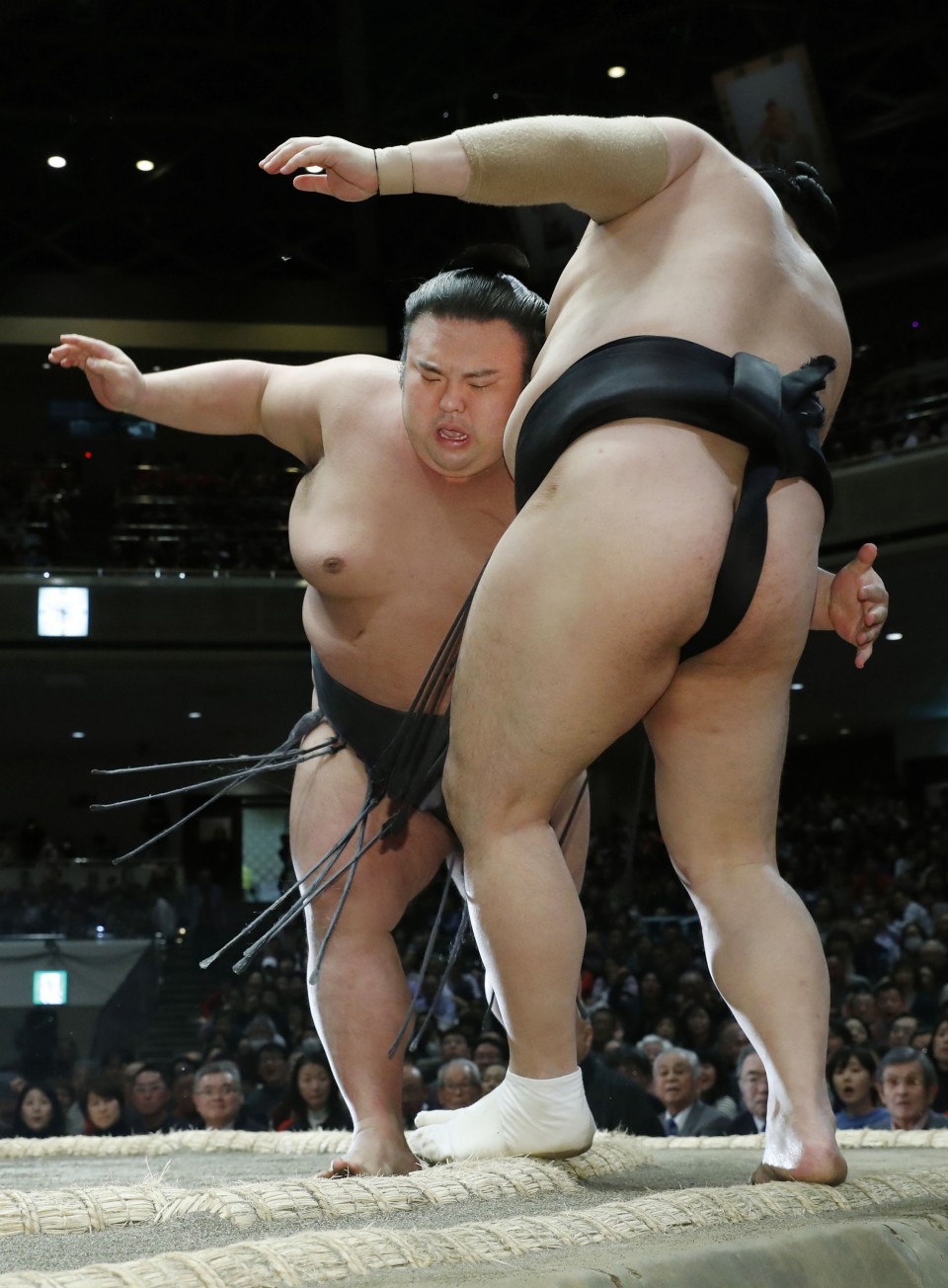 TOKYO - Takakeisho and Shodai maintained their share of the lead at the New Year Grand Sumo Tournament on Sunday following losses by two of the five joint overnight leaders.

The pair sit in a three-way tie at 7-1 with No. 17 maegashira Tokushoryu after No. 1 Endo and No. 14 Terutsuyoshi were defeated on Day 8 of the 15-day tournament at Ryogoku Kokugikan.

Ozeki Takakeisho, who is chasing his second top-level title, overpowered No. 4 maegashira Okinoumi in the day's penultimate bout.

Takakeisho slammed Okinoumi (5-3) back to the straw from the opening charge, then held off an attempted rally by the maegashira before using his leverage to quickly secure the win by frontal force out.

With the win, the 23-year-old Chiganoura stable grappler further improved his title odds in the absence of Mongolian-born grand champions Hakuho and Kakuryu, both of whom have pulled out hurt.

No. 4 maegashira Shodai stayed at the front of the pack with a skillful display against sekiwake Asanoyama (5-3), who had been tipped as a contender here.

After a powerful opening clash in which neither combatant took a step back, Shodai used Asanoyama's momentum against him, pulling him off center and toppling him with a beltless arm throw.

Ozeki Goeido (3-5) teetered further toward demotion from sumo's second-highest rank after quickly succumbing to a slap-down against komusubi Abi (4-4).

The 33-year-old Osaka native is competing as a demotion-threatened "kadoban" ozeki after pulling out of the previous tournament with a losing record, and must win at least eight bouts to keep his rank.

Abi, who has been battling a knee injury, said he was rounding into form following an interrupted buildup to the meet.

"During the opening days it cost me matches because I wasn't able to practice that much, but I'm finding my rhythm," the 25-year-old Saitama product said.

Sekiwake Takayasu (3-5) saw his hopes of a return to ozeki slip further away following a push-out loss to No. 2 Hokutofuji (5-3).

After a heavy clash, Takayasu tried in vain to secure a belt grip in the face of a relentless attack from the former komusubi.

With Hokutofuji surging forward, Takayasu withstood one force-out attempt at the edge. But after the action returned to the center of the ring, Hokutofuji buried his head into Takayasu's chest and bulldozed his way to the win.

Following an impressive start to the tournament, including wins against both yokozuna, Endo (6-2) dropped off the pace with his second loss against No. 5 Enho (4-4).

In a highly anticipated bout between the pair of crowd favorites from Ishikawa Prefecture, 99-kilogram dynamo Enho gave an impressive demonstration of speed and footwork as he outmaneuvered his bigger, more powerful opponent.

Enho went inside early, fending off multiple attempts by Endo at an outside belt grip. Each time Endo advanced, Enho slipped away, pulling him off balance until he eventually yanked him to the edge of the ring, setting him up for a push out. The victory earned a huge ovation for the rising star who is aiming for his fourth straight winning record.