Rank-and-filer Tokushoryu overcame all odds at the New Year Grand Sumo Tournament and beat ozeki Takakeisho in the final bout on Sunday to win his first top-division championship.

The 33-year-old Nara native delivered the performance of his career at Tokyo's Ryogoku Kokugikan to cap off a streak of 13 straight wins and finish with a 14-1 record over 15 days of improbable sumo. 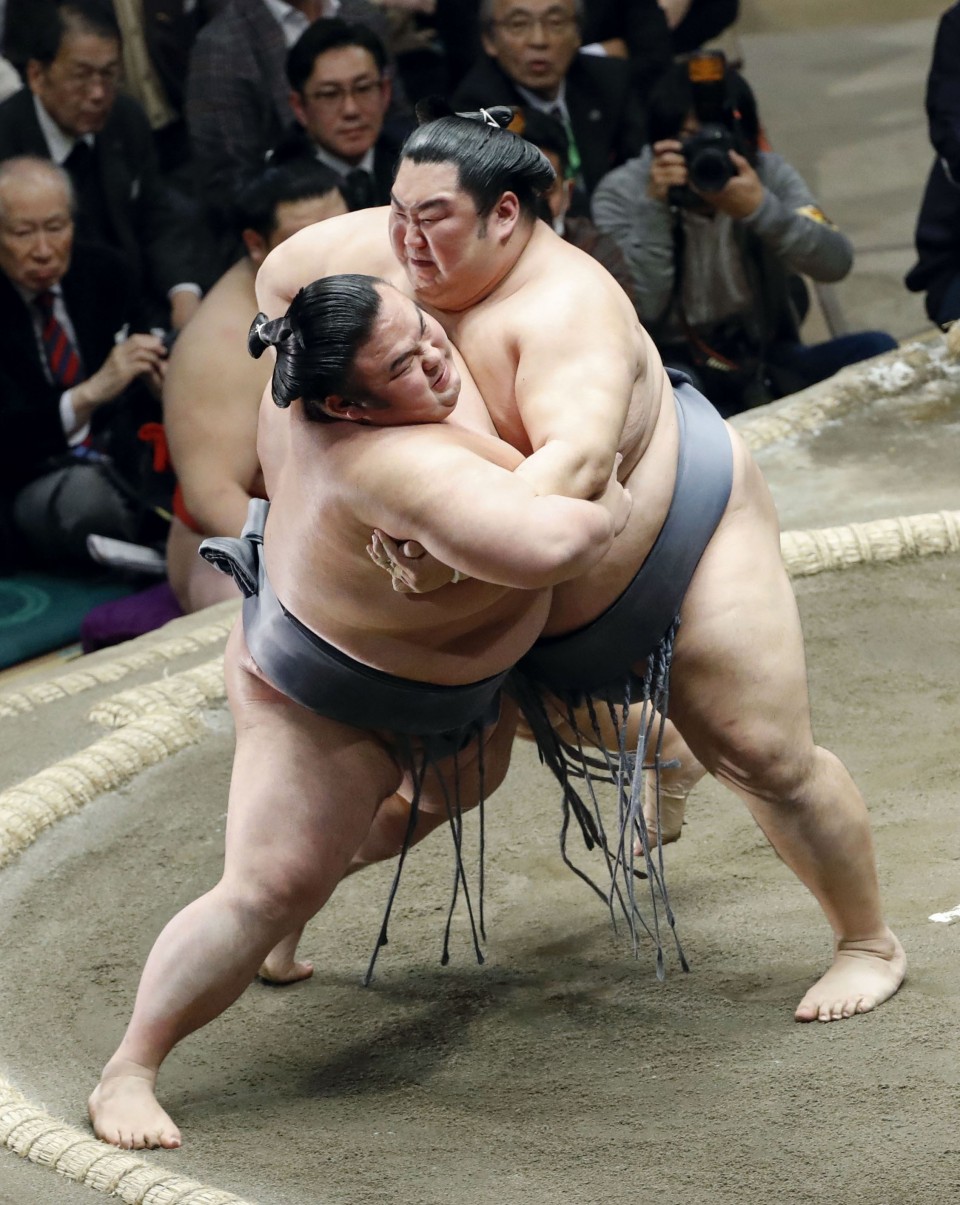 "Deep down I'm feeling like, 'Is it okay for me to win the championship?'" Tokushoryu joked in his post-bout interview.

The No. 17 maegashira became the first bottom-ranked wrestler to win a top-division title since Takatoriki in March 2000 and delivered the first makuuchi championship for his Kise stable.

"I was the lowest-ranking fighter, I had nothing to fear. I just had to give it everything I had."

Needing a win to avoid a playoff with his closest pursuer, No. 4 Shodai, Tokushoryu faced an uphill battle against Takakeisho (11-4). He muscled the ozeki back after securing a right-handed belt hold, but was nearly swung out when Takakeisho rallied at the straw.

"I got the right-handed belt grip and I charged forward, then I got swung around by him and I thought that it was over, but I just kept going," Tokushoryu said.

After regaining his balance, Tokushoryu stepped on the gas and drove Takakeisho to the other side of the ring, forcing him to step out as both wrestlers tumbled down. 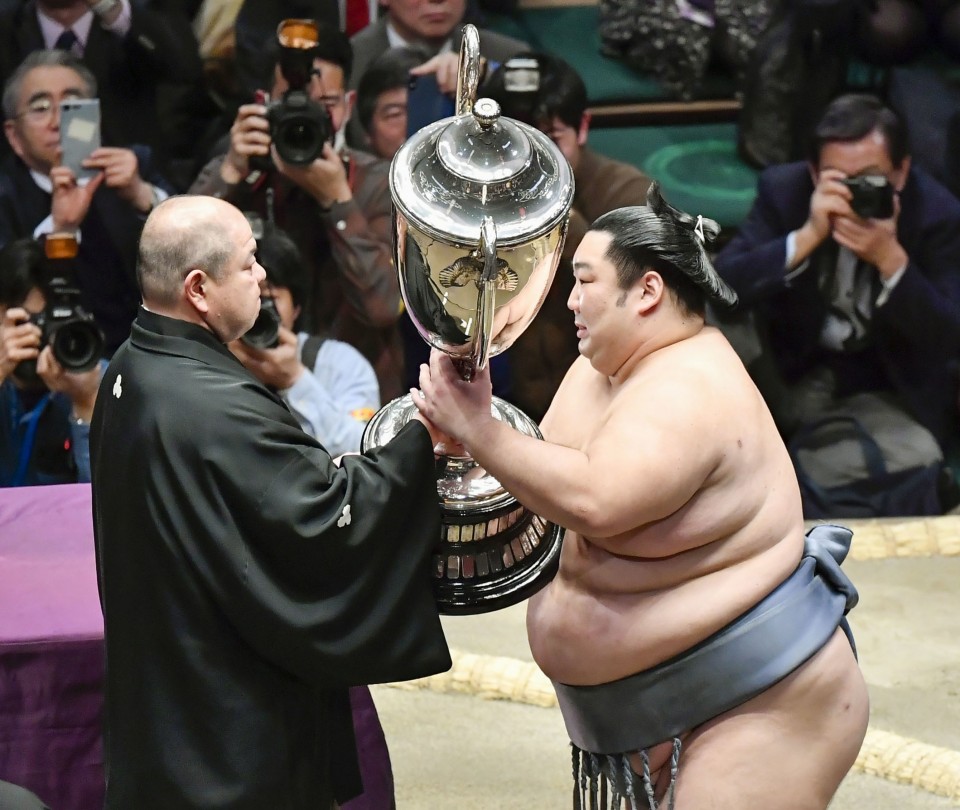 Tokushoryu, who spent 12 of the last 13 grand tournaments in the second-tier juryo division, is the first Nara-born wrestler to lift the Emperor's Cup in nearly 100 years.

He also won an Outstanding Performance Prize for his efforts, one of two special prizes earned here, and the first two of his 12-year career.

Earlier, No. 4 Shodai (13-2) kept his title hopes alive by steamrolling No. 2 Mitakeumi (7-8). Shodai instantly drove the former sekiwake back to the edge, and delivered a final shove as Mitakeumi teetered on the straw.

Both Tokushoryu and Shodai earned Fighting Spirit Prizes for their domination as co-leaders during the second half of the tournament.

"It would have been great if I could have (had a playoff)," Shodai said. "I was ready and waiting, but it just didn't happen."

The other stars of the year's first meet had mixed fates.

No. 1 Endo easily dispatched No. 7 Shohozan (7-8) and ended the meet at 9-6. The popular top-ranked maegashira, who beat both yokozuna before they pulled out with injuries, won his first Outstanding Performance Prize.

Hokutofuji won his second Technique Prize for his impressive pusher-thruster style of sumo that helped him beat both ozeki and grand champion Kakuryu in the early days of the meet.

Asanoyama clinched a 10th win in his sekiwake debut after driving No. 8 Ryuden (10-5) to the edge and flattening him on the dohyo.

New komusubi Daieisho beat his colleague Abi (5-10) to salvage a 7-8 record in his first appearance in the "sanyaku" ranks, the three below yokozuna.

In the lower ranks, makuuchi debutant Kiribayama finished with an 11-4 record to earn a Fighting Spirit Prize.

No. 5 Enho (8-7) had been in the running for a Technique Prize but fell short in getting a conditional ninth win when he was pushed out by No. 11 Kagayaki (10-5). 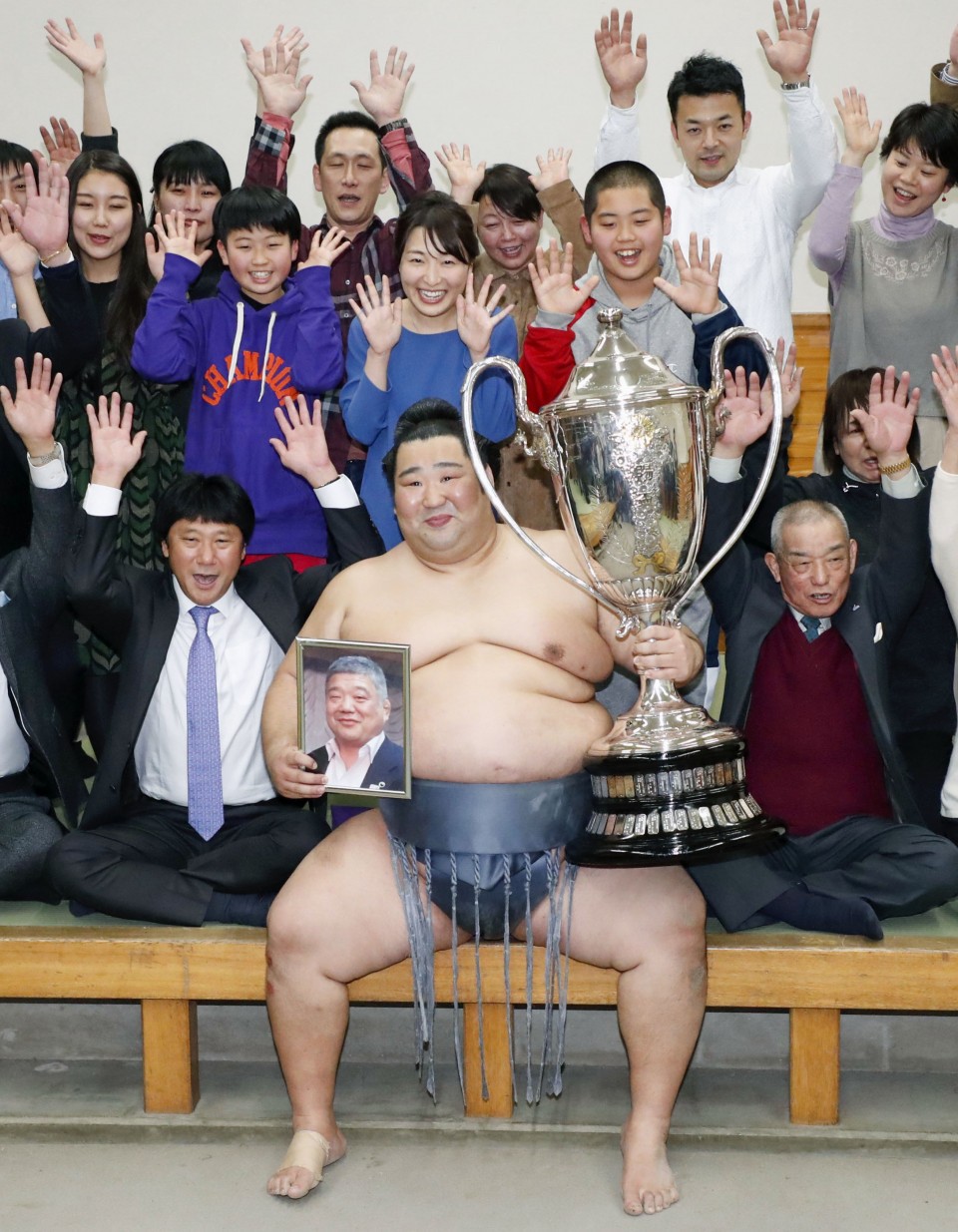