Japan is speeding up its efforts to make accommodation and transport facilities more accessible ahead of the Paralympic Games in Tokyo, but some people with disabilities have questioned whether enough is being done.

While the games are touted as a chance to create a more inclusive society, a Kyodo News survey showed 66 percent of respondents did not see any improvement in accessibility or understanding of disabilities since 2013, when Tokyo was awarded hosting rights. In comparison, 34 percent said they had noticed progress. 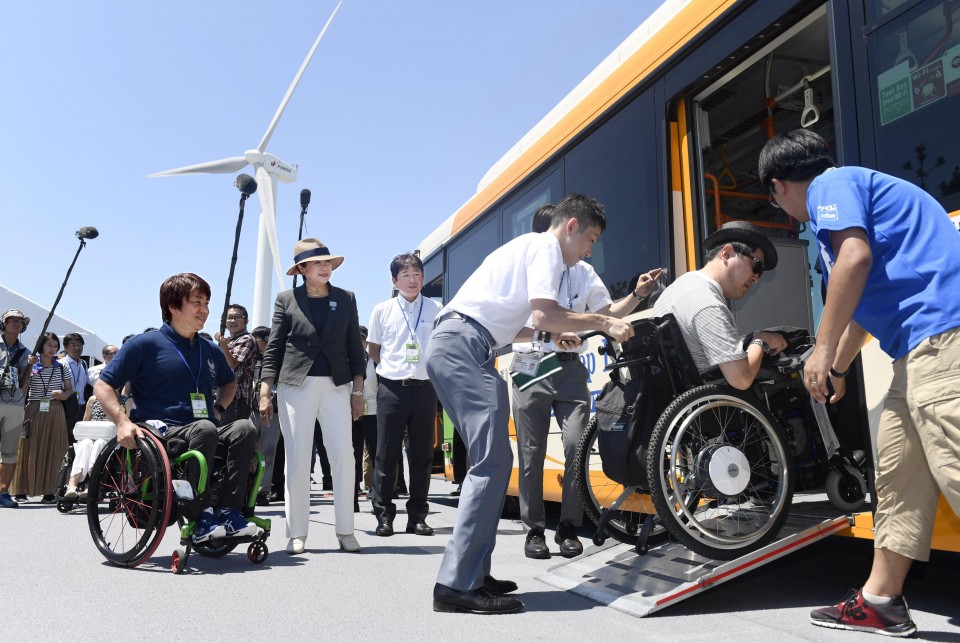 The survey targeting people with disabilities across the country was conducted from June to July 2019 in cooperation with the Japan Disability Forum and the Nationwide Support Center for Students with Disabilities. A total of 564 people responded to the survey.

According to another Kyodo News survey conducted from June to August, 98 of 175 responding para athletes aiming for the Tokyo Games said accessibility at public facilities and transportation systems needed to be improved.

Against this backdrop, the revised "barrier-free" enforcement order came into effect in September. Newly built or renovated hotels and inns with total floor space of at least 2,000 square meters and 50 guestrooms or more must make at least 1 percent of their rooms accessible to wheelchair users.

Tokyo Gov. Yuriko Koike said in a recent interview, "We enacted the country's first ordinance of its kind, which makes hotel guestrooms barrier-free."

Koike said she hoped improved accessibility would contribute to "sellout crowds" during the Paralympics.

In Tokyo, work to increase the capacity of venues, ease expected congestion and improve accessibility for wheelchair users is picking up pace.

Such efforts are already in full swing at train and subway stations around the National Stadium, the main venue for the Olympic and Paralympic Games.

At JR Sendagaya Station in Shibuya Ward, close to the Tokyo Metropolitan Gymnasium, construction was under way on a new platform with improved accessibility. It is part of a new station building with an increased number of elevators, expected to open next spring.

At Tatsumi Station in Koto Ward, close to swimming competition venues, a new elevator with capacity for 20 passengers is already in operation.

According to Tokyo Metro Co., nine stations including Tatsumi were to undergo improvements or installation of elevators for the Olympic and Paralympic Games.

"We have further accelerated our barrier-free initiative at stations ever since Tokyo was elected as the host city," said Kazunori Wakita, who is in charge of measures related to the Games at Tokyo Metro. 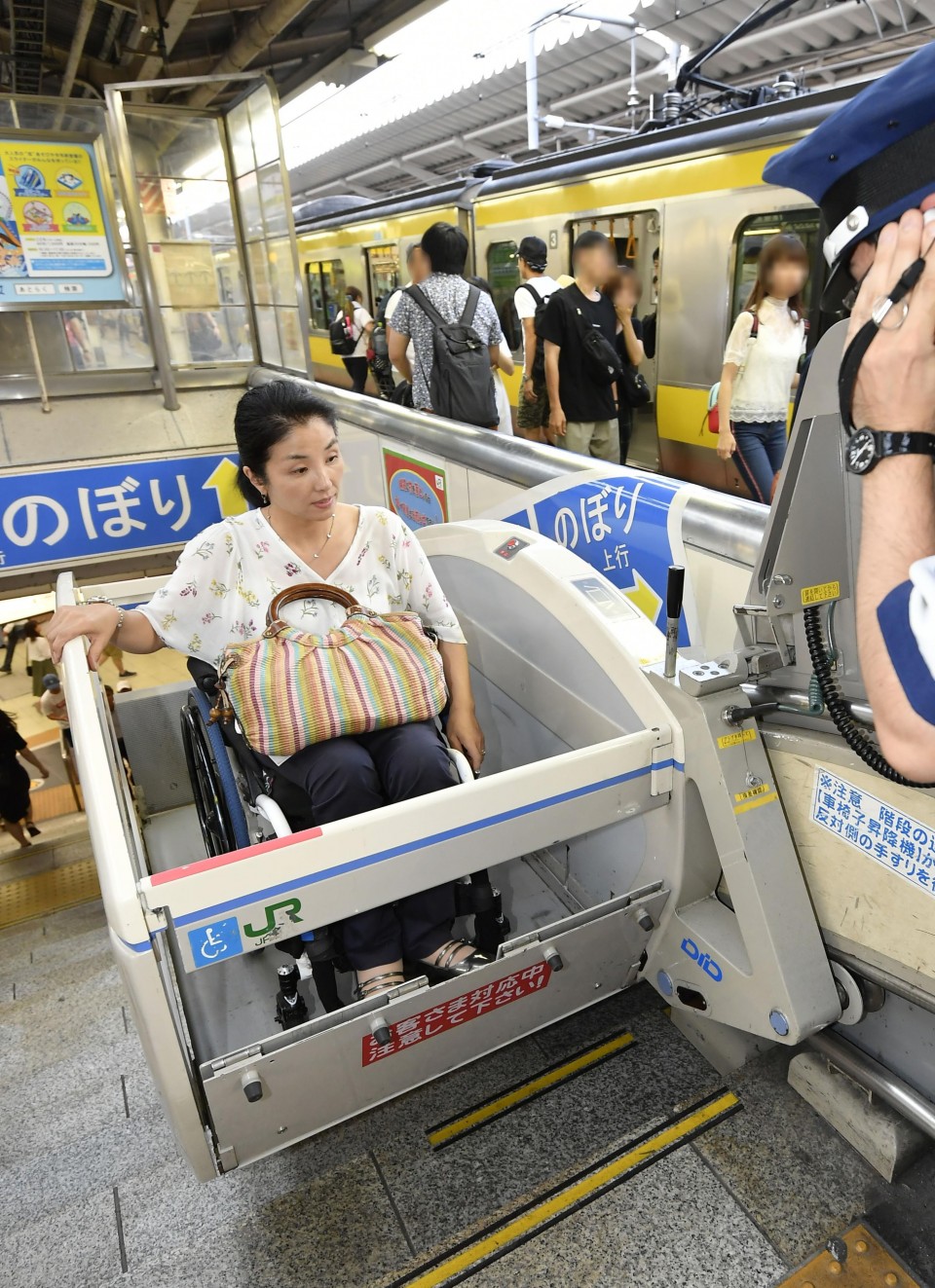 The installation rate of platform doors at Tokyo Metro stations is planned to rise by 30 percent from the end of fiscal 2013, shortly after the election of Tokyo as the host city, with the company hoping the improved accessibility will become a legacy of the Games passed onto the next generation.

The year 2019 brought greater recognition of disabilities and accessibility, as two lawmakers with severe physical disabilities were elected into the national parliament through the House of Councillors election in July.

Eiko Kimura, a member of the House of Councillors who has cerebral palsy, said in the Diet, "We will not be able to ride the shinkansen bullet train at short notice in cases of emergency, such as the death of a family member."

"It effectively violates orders and guidelines based on the barrier-free transportation law," she said, calling for expanding the designated space in the bullet trains to accommodate electric wheelchairs, which are larger than conventional ones in size.

Kimura, an electric wheelchair user, rode a bullet train between Tokyo and Shinagawa stations in December to inspect the wheelchair space.

Central Japan Railway Co. will introduce the N700S, a new bullet train model with enlarged space capable of stationing two wheelchairs, on the Tokaido Shinkansen Line in July 2020. The current model N700A comes with a designated space for only one wheelchair, while wheelchair users often sit on regular seats in the bullet trains.

Along with the improvements in the accessibility of infrastructure, efforts to deepen public understanding of disabilities through education at schools and elsewhere have been under way in the country. 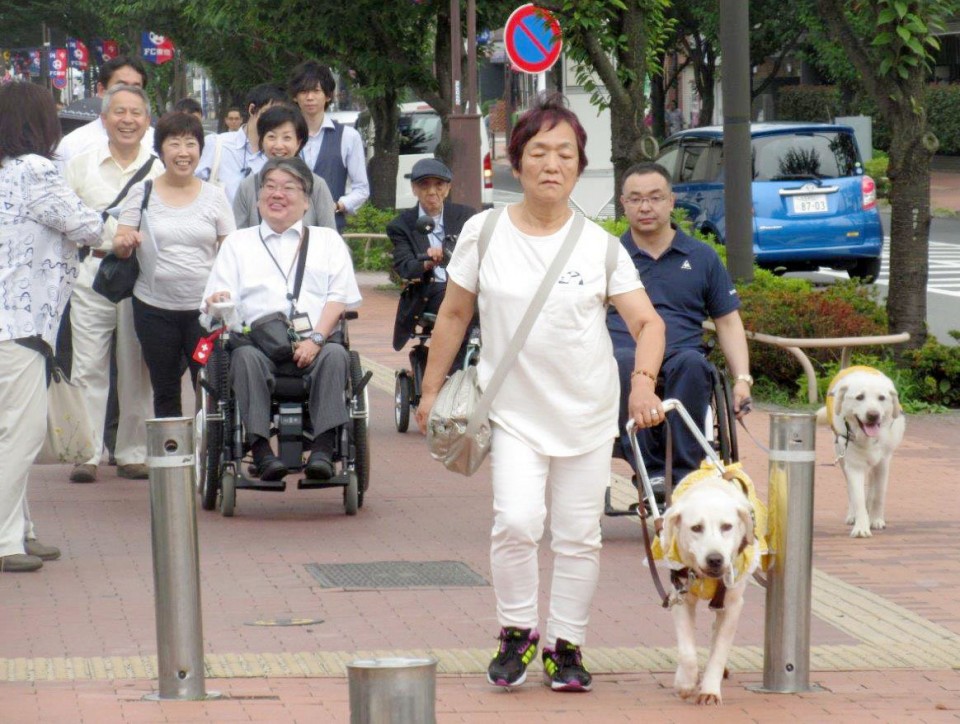 (File photo taken in June 2017 shows members of a group for people with disabilities testing out a route by foot between one of the 2020 Tokyo Olympic and Paralympic venues and its nearest station in Tokyo's Chofu.)

Monika Seryu, a Japanese para-canoeist aiming to win medals at the Tokyo Games, also stressed the importance of the dissemination of a barrier-free mentality in society, with accessible infrastructure forming only part of the equation.

"I take part in the physical education class at my university with abled-body students, many of whom aspire to be teachers. Because of my participation, others can learn what kind of arrangements should be made to accept students in wheelchairs," she said during an interview.

To seize this opportunity and realize inclusive opportunities, efforts must continue beyond the Tokyo Games, Seryu suggested.

The Paralympic Games open Aug. 25 and continue through Sept. 6.