A fire drill was held Monday at the World Heritage-listed Yakushiji Temple in the western Japan city of Nara, following a blaze that destroyed Shuri Castle in Okinawa last year.

Ahead of the country's Cultural Property Fire Prevention Day on Sunday, about 100 Buddhist priests and firefighters checked procedures to bring out cultural assets and injured people to safety under the assumption that a fire had broken out in the temple's Kondo main hall. A dummy Buddhist statue was used in the drill.

The drill came before the temple completes this spring a nine-year repair project of the East Pagoda, or Toto, which is the temple's only surviving original structure from the eighth century.

Yakushiji was initially built in Kashihara in Nara Prefecture where the capital Fujiwarakyo at that time was located at the end of the seventh century. But when the capital was moved to the city of Nara as Heijokyo in 710, the temple was also moved to its current location.

The temple's structures other than the East Pagoda were later burnt down. The current main hall was erected in 1976. 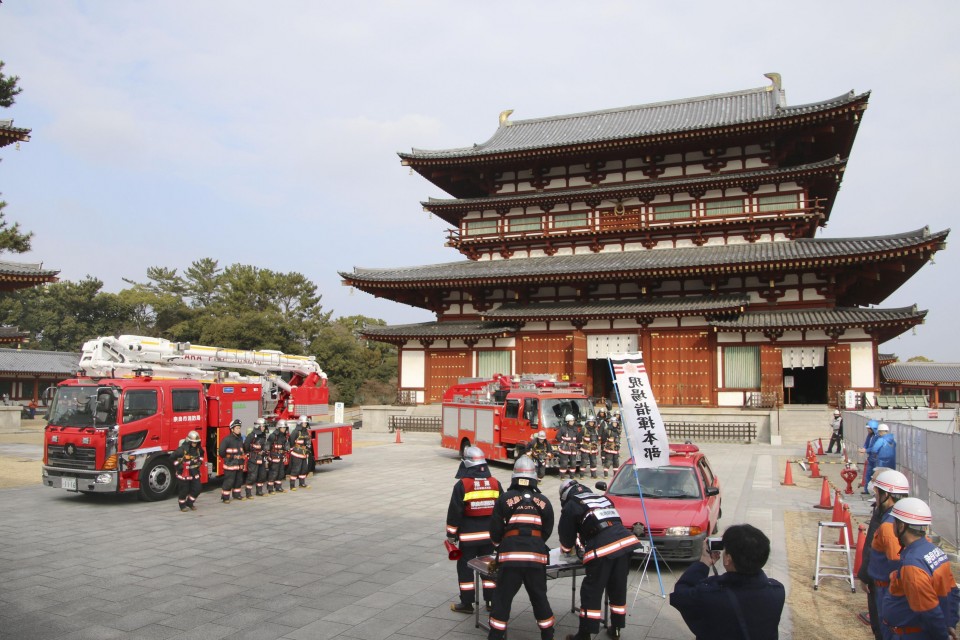 (A fire drill is conducted at World Heritage-listed Yakushiji Temple in Nara, western Japan, on Jan. 20, 2020.)

Shuri Castle, located at a World Heritage site in the southernmost island prefecture, burned to the ground in late October as the result, it is believed, of a faulty electrical system.

Japan designated the fire prevention day in 1955, after a fire on Jan. 26, 1949, engulfed the main hall of Horyuji, another World Heritage Buddhist temple in Nara Prefecture.

Fire drills are held at cultural heritage sites across the country on or around Jan. 26 every year.