Unheralded Tokushoryu stands one win away from an improbable championship at the New Year Grand Sumo Tournament after beating Shodai in a battle of the joint overnight leaders on Saturday.

Occupying the lowest rung of sumo's top division, the No. 17 maegashira took the outright lead at Ryogoku Kokugikan as he outmaneuvered No. 4-ranked Shodai and improved to 13-1 on the penultimate day.

"My sumo is clumsy, but I'm at the very bottom of the rankings, so what have I got to be afraid of," Tokushoryu said.

With both grand champions out injured, and most of the remaining elite wrestlers struggling, the 15-day meet became a two-way race between the pair of rank-and-file grapplers after ozeki Takakeisho (11-3) lost to sekiwake Asanoyama (9-5).

The 33-year-old Tokushoryu, who has spent most of his recent career in the lower divisions, continued defying predictions by using a right outside grip to thrust down Shodai (12-2), winner of their only previous meeting.

After the pair locked up in the middle of the ring, Shodai took the offensive and drove Tokushoryu backward. But the lower-ranked wrestler kept his cool and was able to pull Shodai off balance and down to the clay, all while backpedaling toward the straw. 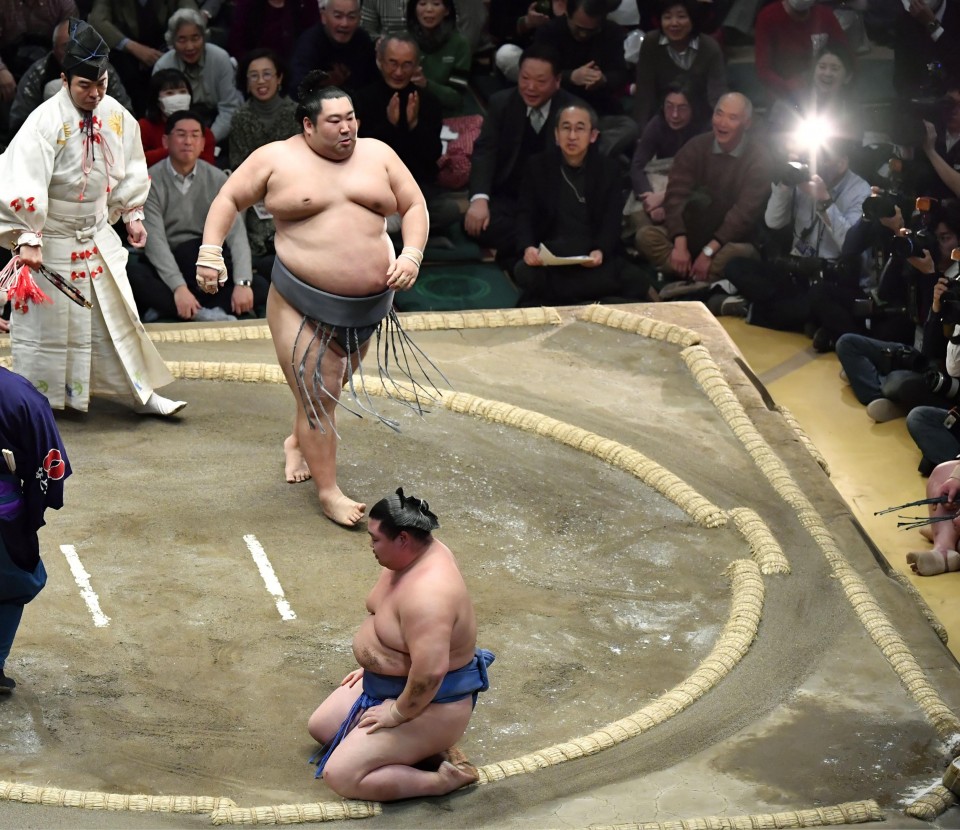 Should Tokushoryu maintain his lead through the final day -- when the 188-kilogram pusher-thruster locks horns with Takakeisho -- he will become the first bottom-ranked wrestler to raise the Emperor's Cup since Takatoriki in March 2000.

Takakeisho knocked Asanoyama off balance with a powerful opening blast, but the sekiwake rallied back to the middle after resisting an attempted thrust out. As the two young stars jockeyed for position, Asanoyama used his left arm to pin Takakeisho's right before toppling him with an overarm throw.

The disappointments continued to mount for ozeki Goeido (5-9), who was quickly driven from the ring by No. 7 Shohozan (7-7).

The maegashira used his footspeed to ambush Goeido -- whose demotion from the second-highest rank is already assured -- and quickly secure the win with a frontal crush out.

Sekiwake Takayasu (5-9) defeated No. 6 Tochinoshin (5-9) by overarm throw in a battle of injury-hampered former ozeki. The Tagonoura stable wrestler took just 1.4 seconds to send the burly Georgian to the clay.

Komusubi Daieisho improved to 6-8 with a win against crowd-pleasing No. 5 Enho (8-6). The 99-kg maegashira, who has claimed a string of thrilling wins over much-bigger opponents, tried to evade Daieisho at the perimeter of the ring, but was not nimble enough to avoid a thrust out.

The other komusubi, Abi, continued his underwhelming run, dropping to 5-9 with a loss to No. 6 Takarafuji (6-8).

The Saitama native opened with his trademark thrusting attack but was unable to dislodge Takarafuji, who yanked him over the straw by his arm.