Prime Minister Shinzo Abe will make a five-day trip from Saturday to the Middle East, the Japanese government said Friday, as it ordered the Maritime Self-Defense Force to dispatch a destroyer and patrol planes to the region on an information-gathering mission.

Seeking to help stabilize the region amid simmering tensions between Iran and the United States, Abe plans to go to Saudi Arabia, the United Arab Emirates and Oman for talks with their leaders, Chief Cabinet Secretary Yoshihide Suga said at a press conference.

The government had weighed the option of canceling the trip, but Abe decided to go ahead with it as U.S. President Donald Trump backed away from further military action against Iran, leading to an easing of tensions between the longtime foes.

Abe will "exchange views with (the leaders of) the three countries, which play important roles in easing tensions and stabilizing the situation in the region," Suga, the top government spokesman, said.

"He plans to seek cooperation on ensuring stable energy supplies and safe navigation," he said. 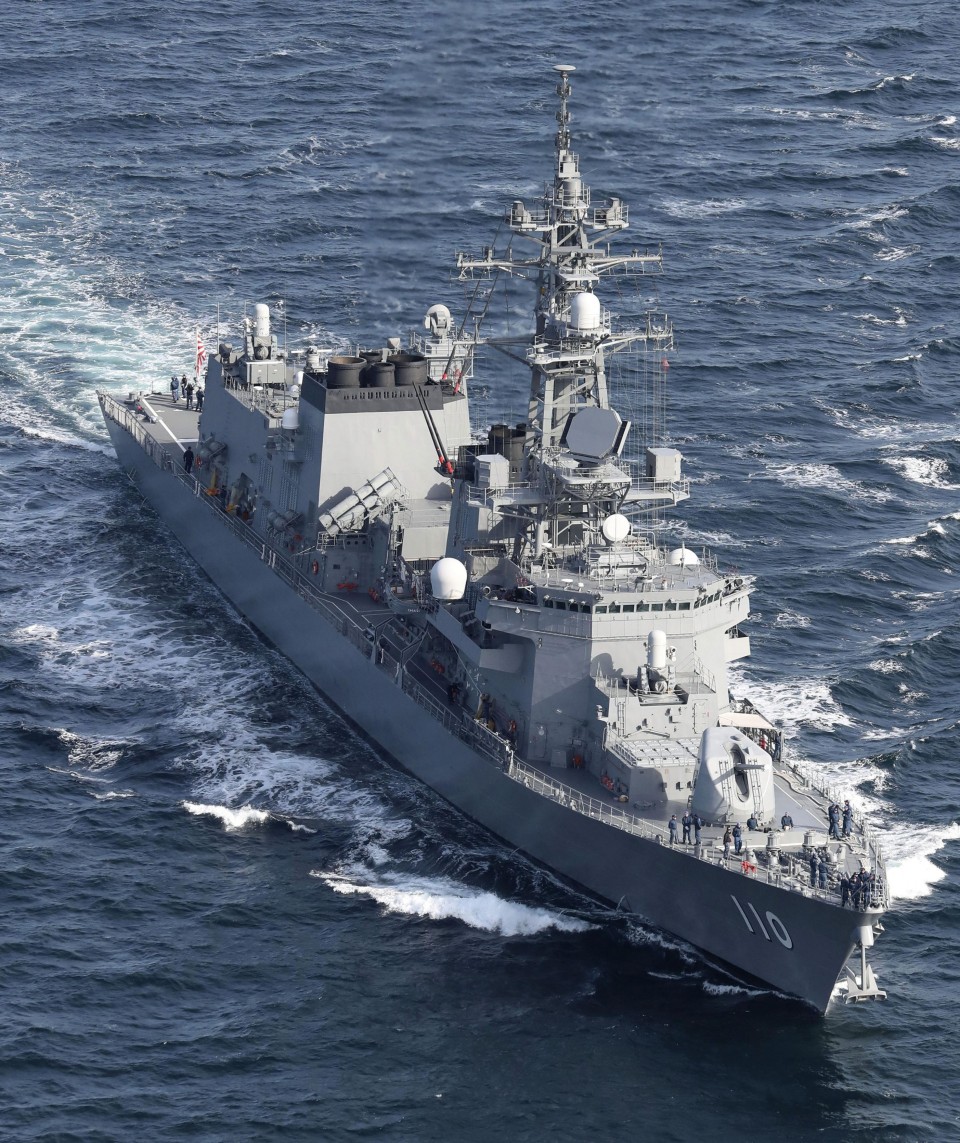 (Photo taken Jan. 10, 2020, from a Kyodo News helicopter shows the Japanese Maritime Self-Defense Force destroyer Takanami off Yokosuka, near Tokyo. On the same day, the Japanese government ordered the MSDF to dispatch the Takanami to the Middle East on an information-gathering mission.)

Abe is expected to explain Tokyo's dispatch of about 260 MSDF personnel and assets to enhance intelligence capabilities in the Middle East. Defense Minister Taro Kono issued the dispatch order Friday for their operations in areas including the Gulf of Oman and part of the Arabian Sea.

"Tensions in the Middle East are rising and precisely because of that it's necessary for (Japan) to beef up information-gathering activities for the safety of Japan-related vessels," Kono said at a press conference after ordering the dispatch.

"To prevent the energy supply to our country from being cut off by any chance, we'll fully prepare for (the mission)," he said.

He said the destroyer Takanami is set to leave Japan on Feb. 2, while P3-C patrol planes will start the mission in the region on Jan. 20.

The mission term is one year but could be extended with Cabinet approval.

Japan relies heavily on the Middle East for its crude oil imports, and the SDF dispatch is aimed at helping secure the safety of Japan-related commercial ships passing through the region.

The SDF will not operate around the Strait of Hormuz as Japan seeks to draw a clear distinction between its mission and a U.S.-led maritime security initiative.

In recent weeks, Japan has found itself in an increasingly difficult position between Iran and the United States, which have been locked in a months-long standoff over a 2015 nuclear deal. Tokyo has good relations with both countries.

Iran struck back at the United States on Wednesday with the launch of missiles targeting bases in Iraq that host U.S. troops. In a restrained response, Trump said his country will impose tougher economic sanctions on Tehran but does not intend to use its military power against Iran.

Abe expressed support for the measured response by the United States, Japan's longtime security ally, with a government official in Tokyo saying on Thursday, "An all-out confrontation was averted for the time being."