A man on trial over a fatal knife rampage at a care home for the mentally disabled in 2016 told a court on Friday he is mentally competent and can take criminal responsibility, a statement contradicting the defense's not-guilty plea.

During questioning by the defense team at the Yokohama District Court, Satoshi Uematsu, who has admitted to killing 19 residents and injuring dozens more at the facility near Tokyo, said, "It is wrong for (the defense) to argue over my mental competency. I can take responsibility."

Uematsu, 30, also shared his discriminatory views, saying "people who cannot communicate should be put to death painlessly" and should not be protected "as long as they are given time and money by the state." 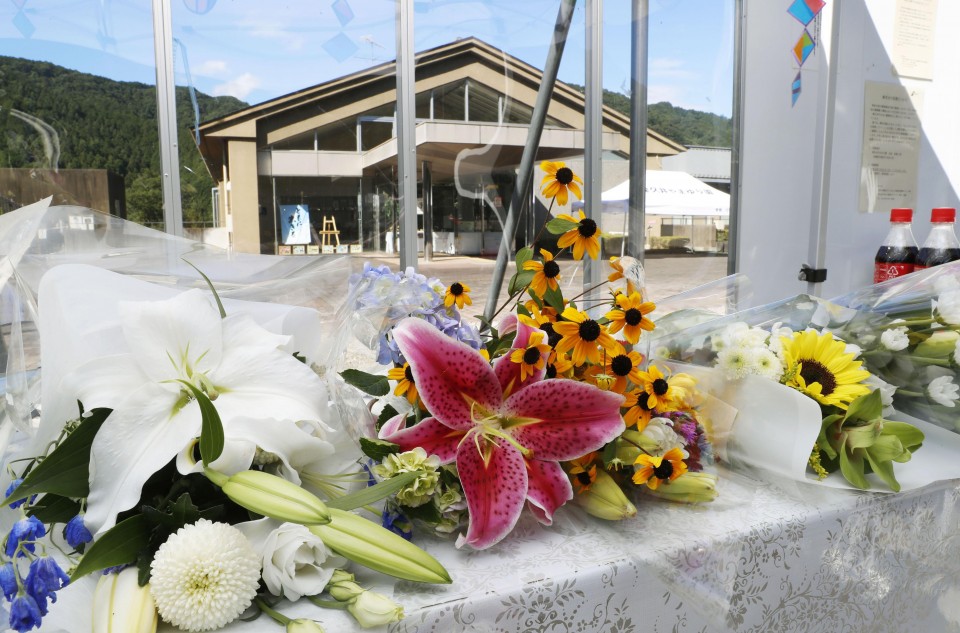 (Flowers are seen placed on an altar set up at Tsukui Yamayuri En on July 26, 2019, the third anniversary of the stabbing rampage.)

His attack at Tsukui Yamayuri En in Sagamihara, Kanagawa Prefecture, has attracted attention because he targeted socially vulnerable individuals and has made discriminatory remarks against the disabled.

Uematsu's trial has already made news when he tried to bite off his finger after offering apologies in a hearing earlier this month. His action prompted the court to remove him from the courtroom.

His mental competency has been a major focus of the trial, with the defense saying he was suffering a mental disorder triggered by marijuana use at the time of the attack. Prosecutors argue he was mentally competent.

According to the indictment, Uematsu, a former employee of Tsukui Yamayuri En care home, stabbed 19 people to death and injured 24 others at the facility in the early hours of July 26, 2016.

He is also accused of injuring two employees of the facility by binding them to handrails in a corridor of the building.