After becoming the first Japanese player to go pro in the United States via the NBA draft, Rui Hachimura is the face of a basketball boom in his home country.

Hachimura's progress in the National Basketball Association is getting wall-to-wall coverage in Japanese media and his face can be seen advertising everything from shoes, to a bank, 5G internet and the nation's ubiquitous cup noodles. 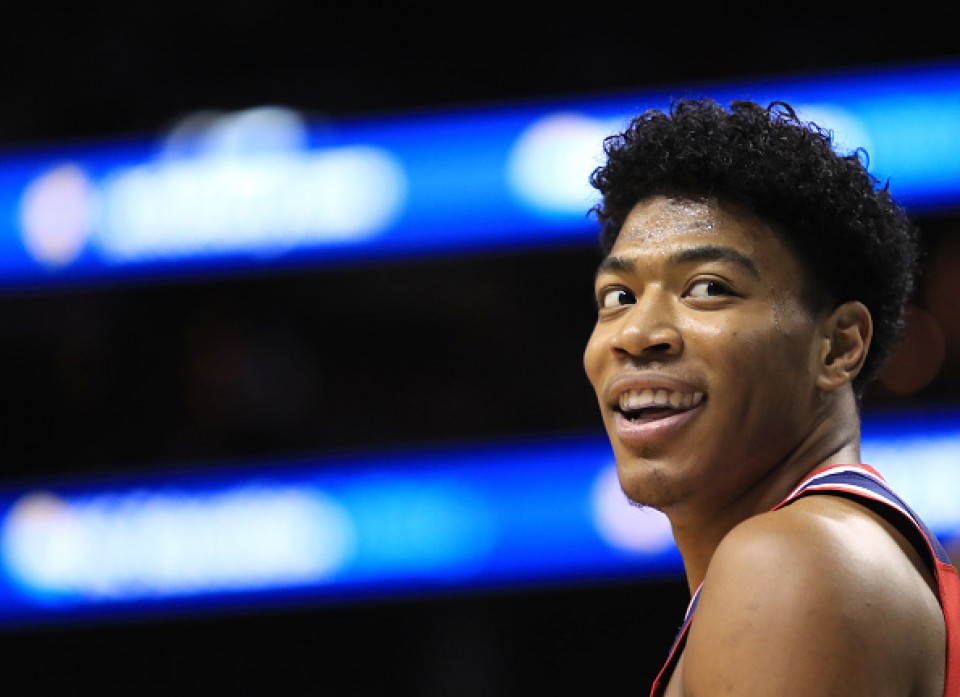 Overall interest in the NBA has risen since Hachimura's emergence, with Rakuten, the company which holds the league's Japanese broadcast rights, seeing a 30 percent year-on-year increase in subscriptions in November.

The NBA, which brought preseason games to Japan for the first time in 16 years in October, is also keen to cash in on Hachimura's newfound profile.

"Never before have we had this number of factors, having the first Japanese player in the top 10 picks of the NBA, and with an Olympics next summer, with a FIBA World Cup here in 2023," NBA Deputy Commissioner Mark Tatum told a business roundtable in October.

"This market, they love sports and it is a very big sports market and I do think that we have an opportunity with the NBA to continue to grow our percentage of the sports marketing business."

In Washington, Hachimura has also generated buzz on and off the court.

"I think that for a player from Japan who will have a strong following, purely from a media standpoint there is the availability of more media and international media in Washington D.C. than you may see in other markets," he said while visiting Tokyo. "That is one of the advantages that clearly Washington has."

The franchise has gone all-in on Hachimura-mania, hiring a Japanese-speaking digital correspondent to track the No. 9 draft pick's every move, as well as establishing a podcast, website and video series called "Wizards Up Close 24/7," all in Japanese. 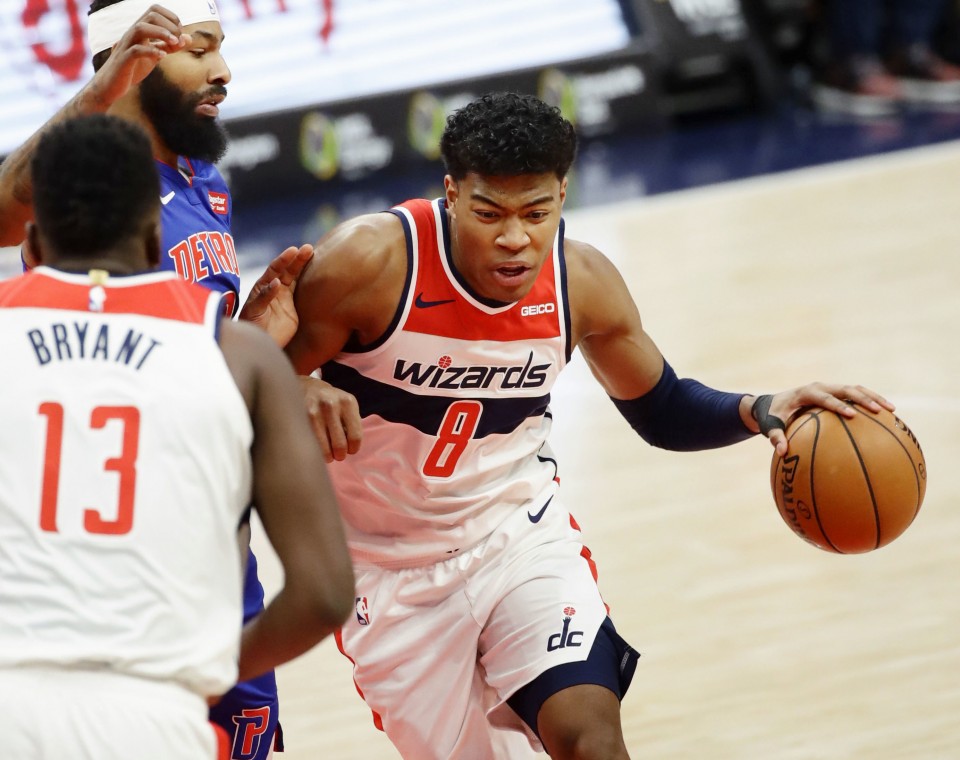 The team also regularly uses the kanji characters for Hachimura's name when posting highlights on their social media channels, something that not long ago would have been unimaginable.

Unfortunately for the Wizards, their on-court product has proven more difficult to sell.

The team has struggled mightily to compete in the top-heavy Eastern Conference, winning just 10 of their 32 games so far and languishing near the foot of the standings, already looking almost certain to miss the playoffs for the second straight year.

After 25 of those games, Hachimura's season took a literal hit when his teammate Issac Bonga inadvertently kicked him in the groin, putting the Japanese out for seven games, and counting.

Wizards head coach Scott Brooks provided an update on his prized rookie on Tuesday, saying he is on the mend but he anticipates he will be out for another "couple of weeks."

"He is in good spirits...He is playing really well, we miss him. We miss his enthusiasm, we miss his game, we miss his presence. I miss working with him and trying to get him better."

But Brooks also said Hachimura, and everyone else, should keep perspective on the injury.

"He is going to play 15 years in the league, if he misses a month of his rookie season it is not a big deal." 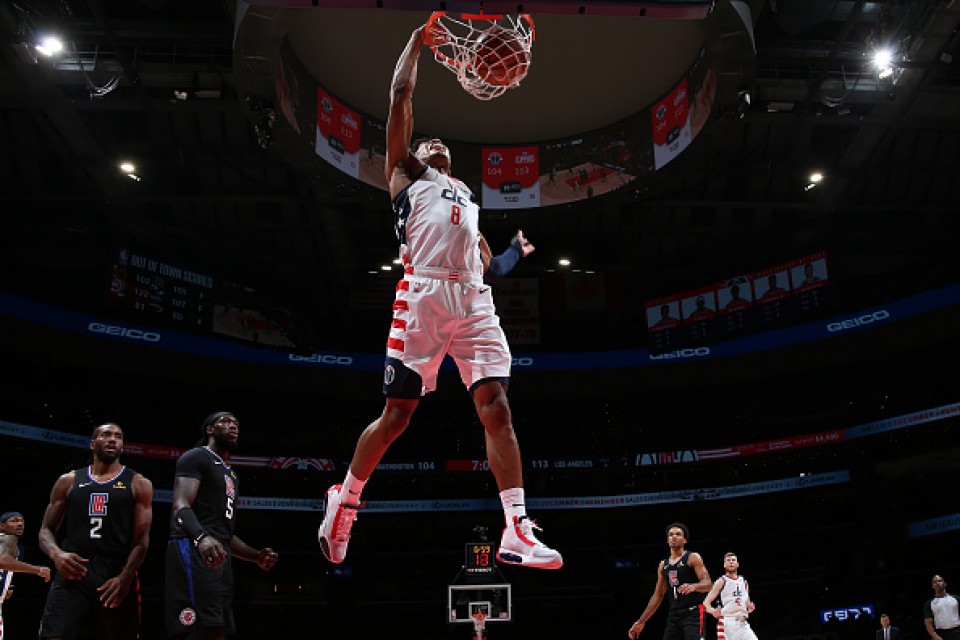 When he is on the court, Hachimura has been one of the team's few bright spots.

He has proven to be a ready-made offensive option in the NBA, averaging 13.9 points per game, equal third-best on his team.

Among rookies, the Toyama Prefecture native is ranked fourth in points per game and first in rebounds.

He is also taking care of the ball, turning it over less than once per game despite playing 29.2 minutes in each. His stats make him a near lock to play in the upcoming All-Star weekend rookie-sophomore Rising Stars game.

On the downside, the eye test indicates that his tunnel vision on offense -- one of the big knocks on him coming out of Gonzaga University -- has continued in the pros.

Hachimura ranks 13th in the entire league in the number of his shots that are blocked, an indication of his tendency to make head-down drives into heavy traffic.

His 3-point shot has yet to materialize, as he averages just 20.8 percent on almost two attempts per game. This has dragged down his overall offensive efficiency, as teams choose not to guard him closely near the 3-point line, cutting off his drives to the basket.

On the defensive end, Hachimura is a real work in progress. 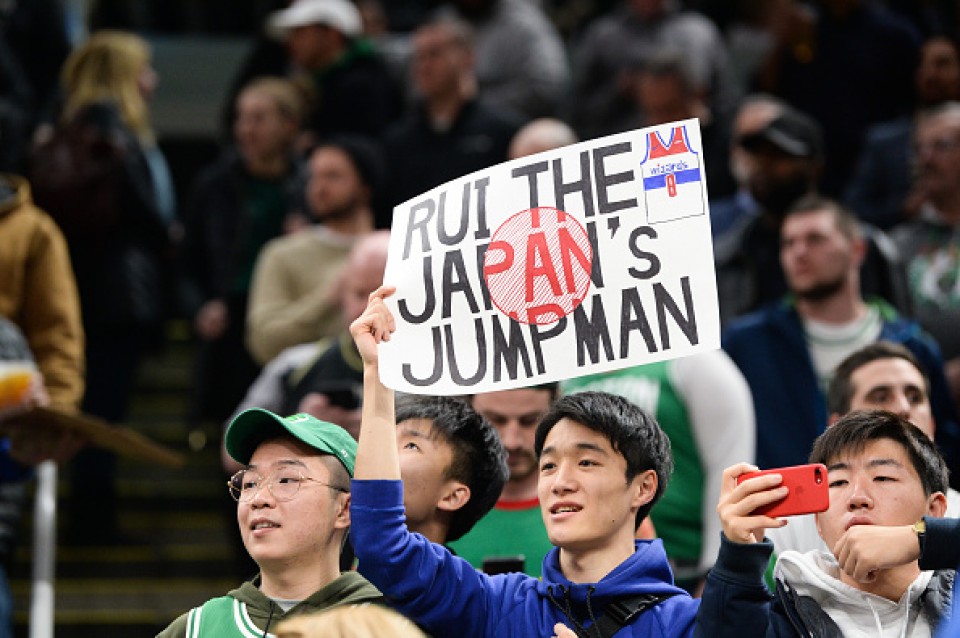 The Wizards are the worst team in the league without the ball, their defensive rating -- the number of points allowed per 100 possessions -- is a full 2.2 points higher than any other team and 14.7 points behind the league-leading Milwaukee Bucks.

Though only a small part of their problems, Hachimura has contributed to his team's struggles as his defensive instincts are clearly not quite up to NBA speed. His personal defensive rating is the worst among rookies who have played more than five games.

Nevertheless, despite his injury and other struggles, the 21-year-old's NBA start has provided plenty of hope for Japanese basketball, and when he and the Memphis Grizzlies' Yuta Watanabe became the first Japanese players to meet on an NBA court in mid-December, it demonstrated great progress.

Add in Yudai Baba, who has played in 18 NBA G League games this season for the Texas Legends, and Japan has three U.S.-based talents to throw at the world at next summer's Tokyo Olympics. 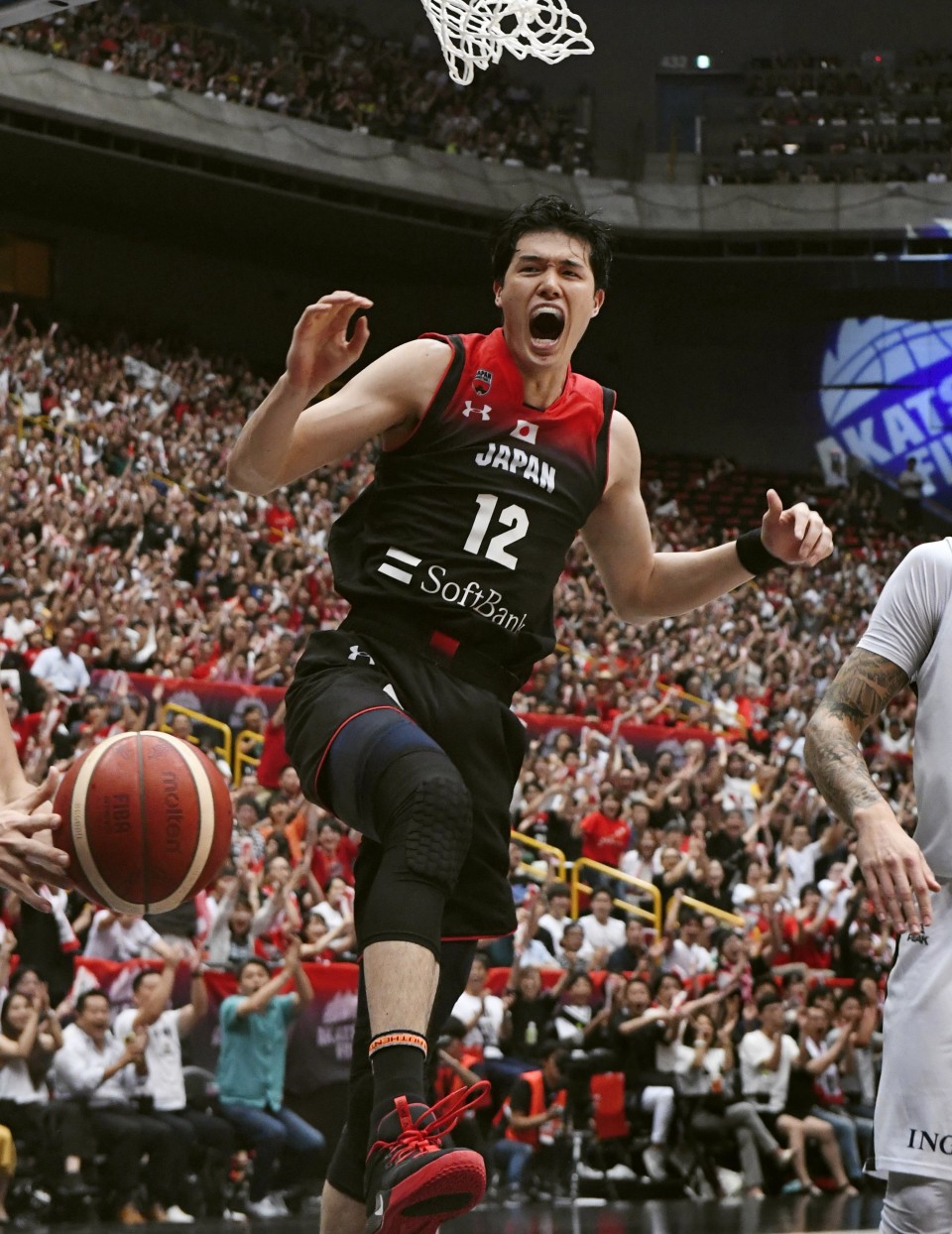 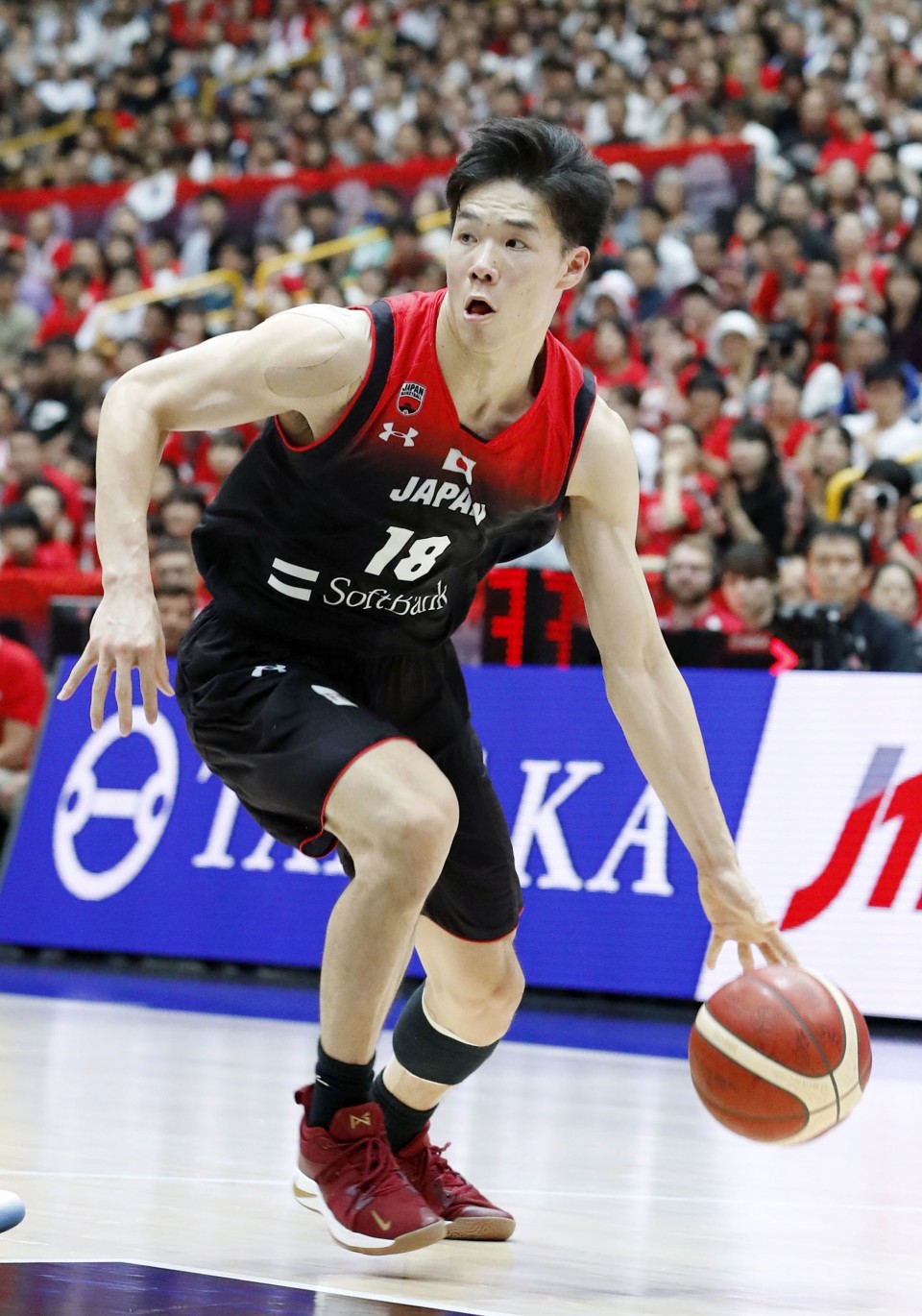 However, expectations have to be tempered based on the national team's performance at the World Cup in China in September.

After making a late charge through qualifying to just reach the tournament, Japan's Akatsuki Five got a quick dose of reality when they went winless in the first round.

Hachimura had a bright start against Turkey and the Czech Republic, scoring 15 and 21 points, respectively, but he was played off the court in his team's 53-point demolition at the hands of the United States. In that game, he scored just four points when Japan needed him most.

Japan coach Julio Lamas did not play the newly drafted Hachimura in the classification round, likely to protect him from injury at the behest of the Wizards.

And now it is Japan that will be sweating on its most important U.S.-based talent returning from injury and staying healthy, with the Tokyo Olympics just seven months away and Hachimura set to be one of host nation's faces of the games.