Few hotels in the world actively encourage guests to have sleepless nights, but one manga-themed establishment in Tokyo does just that -- and it is proving very popular with Japanese and foreigners alike.

The Manga Art Hotel in central Tokyo has developed its own unique offering, with capsule-like rooms built into specially-curated manga comic-stuffed bookshelves. 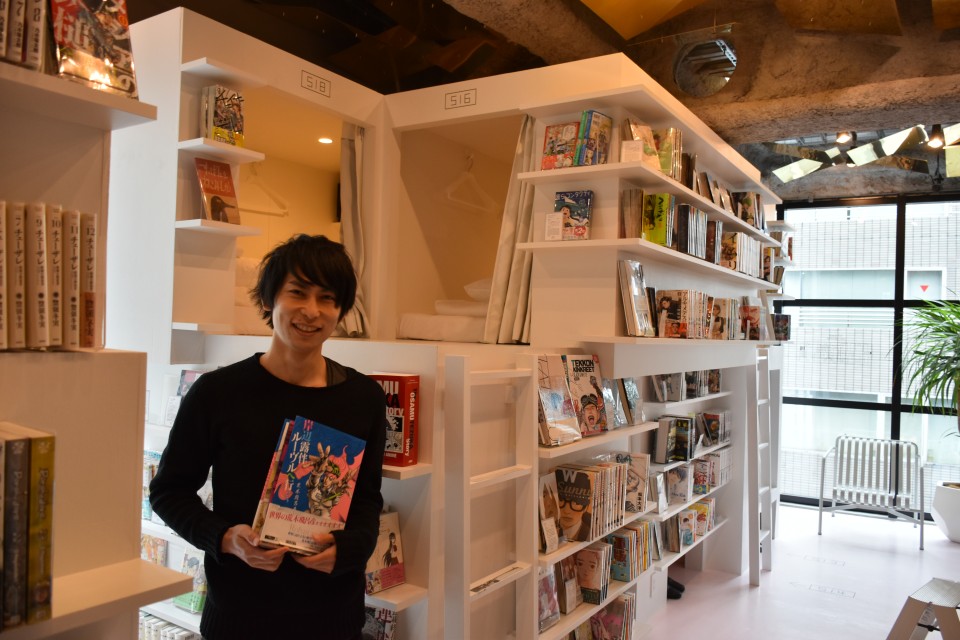 (Masayoshi Mikoshiba holds a manga comic book in the Manga Art Hotel in Tokyo, on Dec. 17, 2019.)

"It is specifically designed to allow guests to concentrate on reading manga," said Masayoshi Mikoshiba, 34, co-founder of the hotel operator dot inc.

Guests were predominantly Japanese when the hotel opened in February 2019 in the Jimbocho area, the capital's second-hand bookstore mecca, but those from abroad have since surged to around 40 percent through word of mouth, with visitors coming from 66 countries.

The hotel is keen to distinguish itself from a normal "manga cafe," uniquely Japanese establishments which customers visit 24 hours, seven days a week to read from an extensive library of comics.

In reality, the cafes serve as late-night refuges for revelers who miss the night's last train and need a comfortable, cheap place with internet to stay until public transport starts running again.

People can enter manga cafes anonymously, and they are not considered the safest late-night option, with customers sometimes getting unruly after a big night drinking.

The hotel strives to deliver a more peaceful, cultured and safe experience for genuine comic enthusiasts, requiring guests to book in advance and give identification like a normal hotel, according to Mikoshiba. 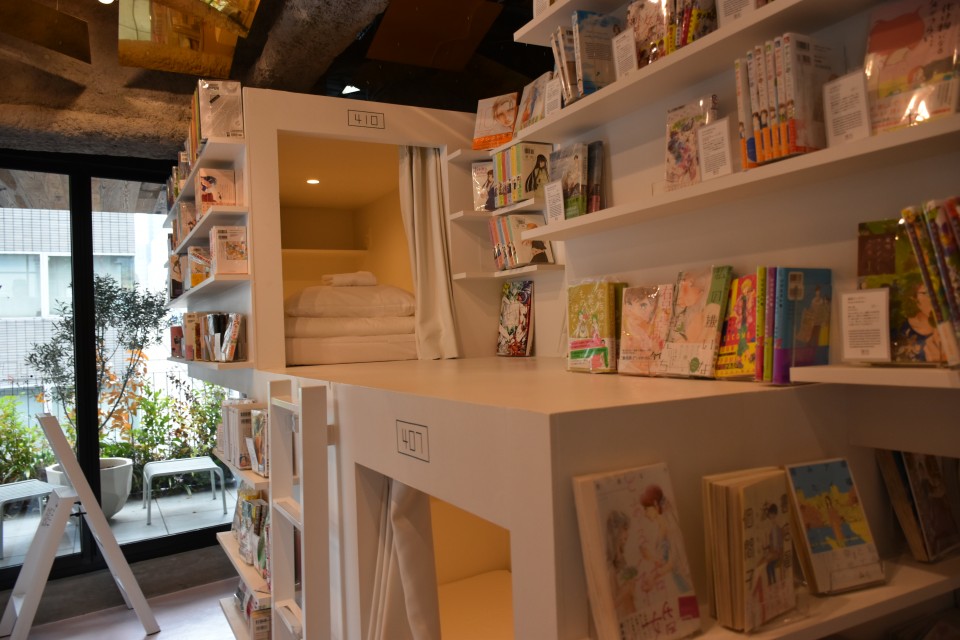 (Book shelves displaying manga and capsule-like rooms are pictured at the Manga Art Hotel in Tokyo on Dec. 17, 2019.)

At the hotel, guests sleep in cuboid spaces behind the shelves, each accommodating one person. With the cubicles dispersed among the shelves rather than lined up, guests feel secluded in their nooks, creating an environment that allows them to concentrate on their chosen manga, according to the operator.

The 180-square-meter facility occupies the fourth and fifth floors of a black nine-story building adorned with a white neon "Manpaku" sign -- a coined term combining the kanji for "manga" and "lodging."

The hotel has a collection of 5,000 manga volumes -- 4,000 in Japanese and 1,000 in English -- displayed on white, minimalist bookshelves including global hits such as "My Hero Academia" and "Attack on Titan" as well as lesser-known artistic works.

Mikoshiba points out the facility offers guests a "digital detox" experience, allowing them to ditch their phones and tablets and get their hands on paper books for a change.

The hotel's central Tokyo location is another drawcard for tourists as it provides easy public transport access to sightseeing spots in the capital, he said.

Regular guests come from all over Japan, and one repeat customer has already stayed at the hotel around 50 times.

Among foreign visitors to the hotel, European nations such as the Netherlands, Britain and Germany are well represented, as are travelers from the United States.

Japan's Asian neighbors from China, South Korea and Taiwan have not yet discovered the Manga Art Hotel in big numbers, despite them making up a large percentage of the total tourists who come to the country.

The hotel aims to eventually have foreigners account for 70 percent of its clientele, Mikoshiba said.

"The hotel is beautiful and cute, with all the manga," said Sarrola Baptist, a 19-year-old French guest. "I have always wanted to come to Tokyo," said the tourist, who learned of the place on a tip from his mother. 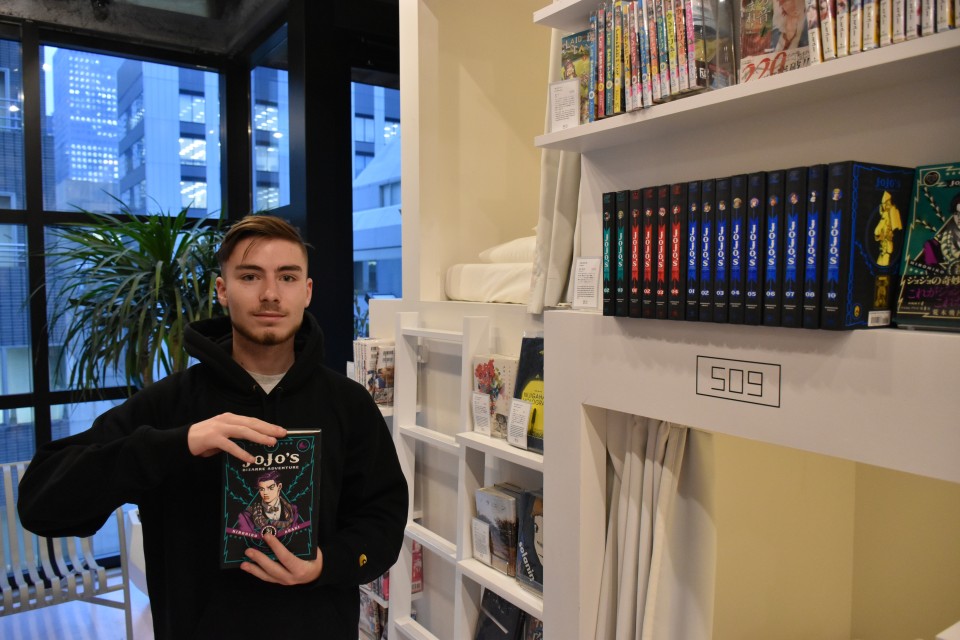 Baptist was reading "JoJo's Bizarre Adventure" in the hotel, whose anime adaptation he had seen before. "It is the first time to read it, and is a good experience," he said.

The hotel rotates the manga available every two months taking into consideration two criteria -- the artistic and design perspective, and the emotions the content stirs in the reader.

Every manga series is accompanied by a Japanese and English description to help guests select what to read.

Mikoshiba included the word "art" in the name of the hotel to promote manga as an art form and to dispel the idea that it is a frivolous form of low-brow entertainment.

In May 2019, he visited a manga exhibition at London's British Museum that investigated the art's origin, and his experience there strengthened his belief of its worth, especially after he interviewed a curator.

He reads about 10 manga books a day, while five other workers each read around 20 so that they can curate their shelves' content. They then debate among themselves which manga meets their high standards.

Mikoshiba and the staff call themselves "manga sommeliers" who serve and guide guests at the reception. "Guests may be asked what they feel like reading, and the sommeliers will recommend manga which seems to suit them," he said.

Although big-name manga works are available, Mikoshiba wants guests to go on a serendipitous manga-finding adventure.

The hotel has also been building a database of its manga collection to help staff find a perfect match for a guest's taste. The hotel's catalog is searchable with emotive keywords such as sad, thrilling or even heart-wrenching.

Mikoshiba is not shy in admitting he has always dreamed of earning money by reading manga, rather than working in an office. "For us, reading manga is working. I had always wanted to be in this kind of environment," he said.

From September 2018 to just before the hotel's grand opening, Mikoshiba read 30 to 50 manga volumes for around 16 straight hours a day. He selected the ones that had a lasting impact to put on the shelves. 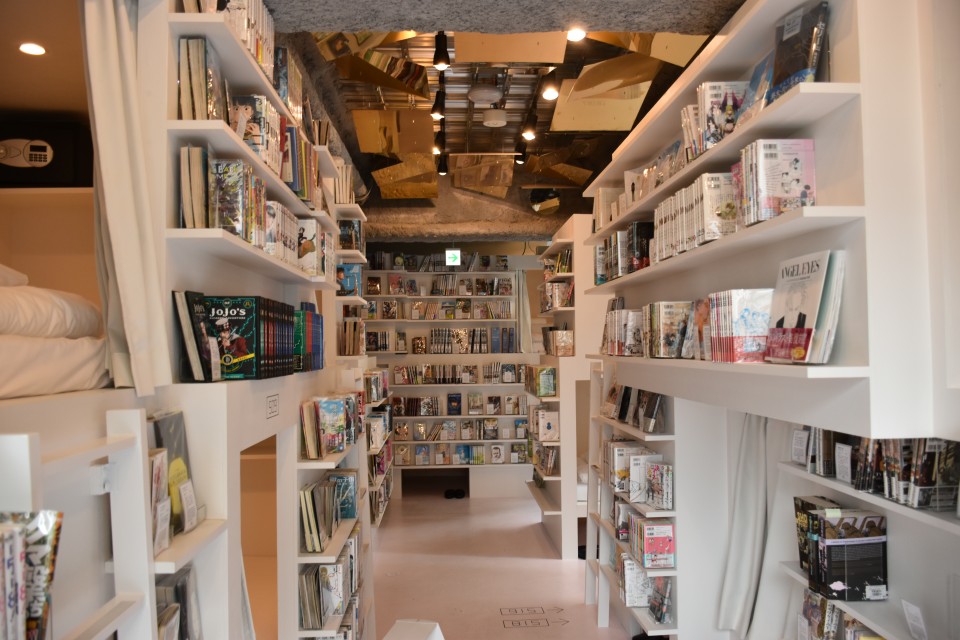 "If the works leave a lasting memory, it means that you're not reading them with your brain but rather with your heart. That stirs your emotion," Mikoshiba said.

The startup co-head said he always wanted to launch a business since university days. After leaving e-commerce giant Rakuten Inc. in 2014, he established a small company servicing holiday rental customers.

He then realized that the demand from tourists to Japan was enormous and only growing as the country has set a goal of attracting 40 million foreign visitors in 2020 when it hosts the Tokyo Olympics and Paralympics, and 60 million in 2030.

He is considering opening more manga art hotels in Japan and aims to expand the reach of manga abroad by opening establishments overseas in the future.

The hotel recently started to post images of some of its manga collection on Instagram with explanations both in English and Japanese so that people will know what to expect when visiting.

Mikoshiba loves traveling, having visited 50 cities in 35 countries, and came to the realization about the power of a common language when communicating with new people.

When Mikoshiba studied international politics at university, he learned that a common language, a tool of mutual understanding, was fundamental to solving wars and conflicts.

When he set up dot inc. in 2016 with Yasukazu Yoshitama, a designer who is also a manga enthusiast, he began his task of establishing the art form as one of these common languages, and benefiting from it.

"When traveling around, I asked other tourists what can be a common language for Japan. Manga was the content that convinced me the most," he said.