No. 4 maegashira Shodai put on an electric performance at the New Year Grand Sumo Tournament on Tuesday to retain his place at the top with fellow rank-and-filer Tokushoryu.

Locking horns with No. 7 Shohozan (5-5) on Day 10 at Tokyo's Ryogoku Kokugikan, Shodai (9-1) lifted the smaller man clear off the ground and blasted him out of the ring.

The former sekiwake, who is coming off an 11-4 runner-up finish at the Kyushu meet in November, faces new komusubi Daieisho on Day 11 as he continues his hunt for a first makuuchi championship.

Chiyomaru got the better of their initial clash and nearly shoved Tokushoryu out, but Tokushoryu sidled along the edge of the ring while getting a hand under Chiyomaru's arm and launching him over the straw.

The 33-year-old Tokushoryu went 11-4 and finished runner-up here in 2015, his best result in the top division. 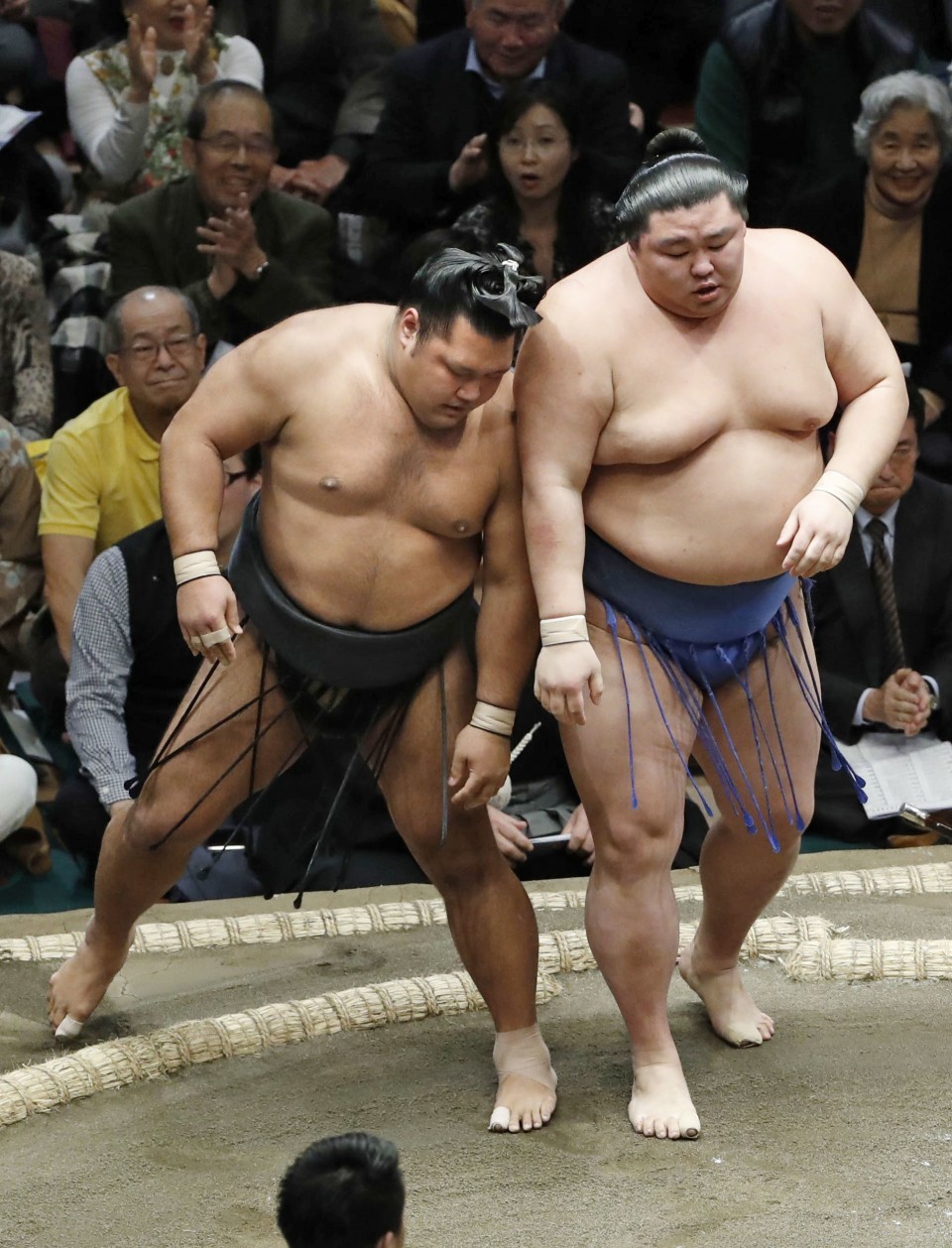 In the highlight bout of Day 10, No. 5 Enho (5-5) fought an ozeki for the second straight day but was outmaneuvered by Takakeisho, who improved to 8-2 to retain a shot at the title.

Looking to follow up his Day 9 victory over Goeido, the top division's lightest grappler searched for an opening as Takakeisho kept him fighting for position. But the ozeki eventually connected on a massive thrust, pushing Enho straight off the dohyo.

No. 9 Yutakayama and No. 11 Kagayaki also secured winning records on Day 10 and remain one victory off the pace alongside Takakeisho. Yutakayama pushed out No. 15 Azumaryu (5-5) and Kagayaki thrusted out No. 13 Kotoeko (2-8).

In other bouts, Goeido fell to 3-7 and is now one loss away from losing his status at sumo's second-highest rank.

The demotion-threatened "kadoban" ozeki, who needs a winning record at the year's first basho to keep his rank, got turned around by No. 6 Takarafuji (5-5) and was pushed out from behind.

A day after relinquishing hopes of an automatic return to ozeki, sekiwake Takayasu (4-6) bounced back with a slap-down victory over Abi (5-5).

Takayasu looked in danger of taking a third straight loss but was able to veer around the komusubi and knock him down to the clay.

New sekiwake Asanoyama was overpowered by No. 6 Tochinoshin (5-5) and fell to 6-4. The pair locked onto each other's belts, with each trying to swing the other down, but the Georgian's power prevailed in the end.

No. 2 Hokutofuji (7-3) turned the tables on Daieisho (3-7) and picked up his seventh win. The komusubi kept Hokutofuji on the defensive with a thrusting and shoving attack, but the maegashira held his ground and tugged Daieisho out by the arm.

No. 2 Mitakeumi (6-4) handed No. 1 Endo (6-4) his third straight loss. The former sekiwake had Endo on the ropes following an inadvertent clash of heads, then flung the popular maegashira around and down after Endo rallied back into the ring.

No. 14 Terutsuyoshi and No. 16 Tochiozan also claimed wins on Day 10 and joined Hokutofuji in third place on the leaderboard at 7-3.