World No. 1 men's badminton player Kento Momota, who was injured in a fatal crash in Malaysia, will return to Japan on Wednesday along with two members of his support team who were also involved in the accident, the Nippon Badminton Association said Tuesday.

Kinji Zeniya, secretary general of the association, told reporters Momota will skip next month's Asia Team Championships and aim to return to action at the All England Open, which gets under way March 11 in Birmingham.

The 25-year-old Momota was heading to Kuala Lumpur International Airport with three others early Monday morning when their van collided into the rear of a 30-ton lorry, killing the Malaysian driver of the van. 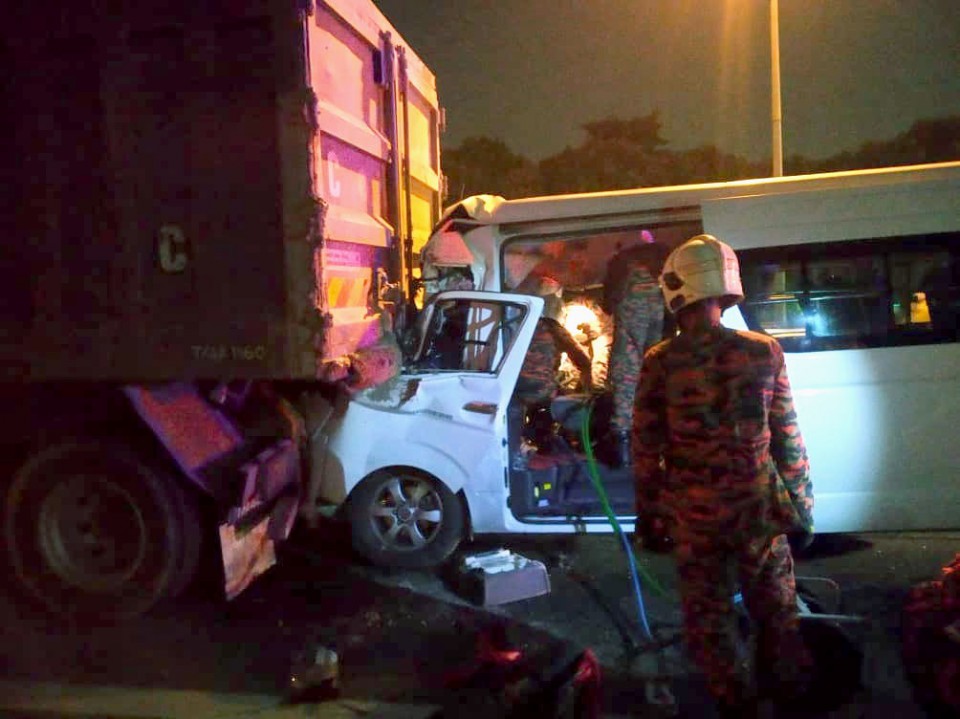 (Photo shows the van, carrying Japanese badminton player Kento Momota, that crashed into a truck early on Jan. 13, 2020 in Kuala Lumpur.)
[Photo courtesy of Fire and Rescue Department of Malaysia]

According to Azhar, Momota will be able to return to practice in roughly a month, and the injuries will not affect his ability to play over the longer term.

"I panicked for a while when I first heard the news," Zeniya said.

"The Tokyo Olympics are important, but I'm really glad none of the three suffered life-threatening injuries," he said.

International Olympic Committee President Thomas Bach also reached out to Momota in a statement Tuesday, wishing him and those injured "a swift recovery from the accident."

"Looking forward to seeing Kento in action at home at the Olympic Games Tokyo 2020," he said in a Twitter post.

In a statement late Monday, the Badminton Association of Malaysia said Momota and the others were "recovering well" at a hospital, but they were being kept under close observation on the advice of doctors.

Momota, who missed the 2016 Rio de Janeiro Olympics due to a suspension for illegal gambling, won 11 international meets last year and is hoping to become Japan's first Olympic badminton gold medalist in men's singles at the Tokyo Olympics this summer.