The top diplomats of Japan, the United States and South Korea on Tuesday urged North Korea to refrain from military provocation and continue denuclearization talks.

Japanese Foreign Minister Toshimitsu Motegi said after discussions with his U.S. and South Korean counterparts, Mike Pompeo and Kang Kyung Wha, that they agreed economic sanctions on the North should not be lifted yet in the absence of any progress in negotiations. 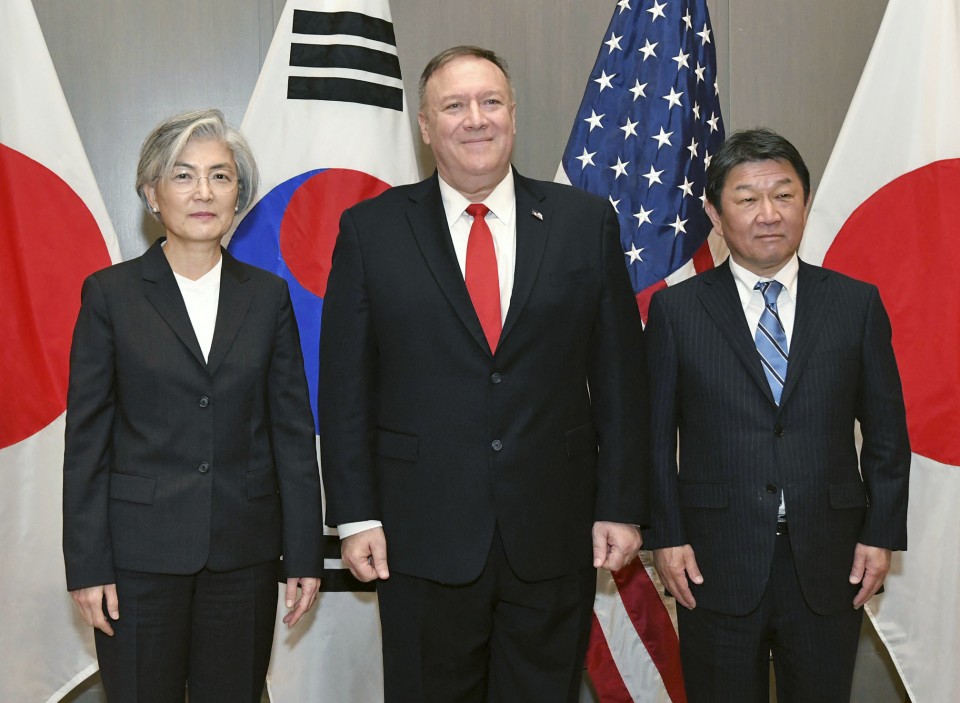 The three-way meeting in East Palo Alto, just outside San Francisco, took place after a deadline set by Pyongyang for a breakthrough by the end of 2019 passed.

"We agreed on the importance of North Korea making positive efforts in talks with the United States rather than going through with provocative moves," Motegi told reporters.

Its most recent missile test was in October, the firing of what it said was a new type of submarine-launched missile into the Sea of Japan. Pyongyang also conducted on two occasions in December what it described as a "crucial" experiment at a rocket launch site, which experts believe involved testing a liquid-fuel engine for a long-range ballistic missile.

The three ministers "emphasized the importance of the U.S.-ROK and U.S.-Japan alliances to security and prosperity in the Indo-Pacific region and the world," the U.S. State Department said, using an acronym for South Korea's formal name, the Republic of Korea.

Motegi and Kang also held separate talks in an effort to resolve a diplomatic feud between their countries over wartime compensation and trade policy.

While Washington looks to maintain cooperation to deal with potential threats, relations between its top allies in Asia have been strained since late 2018 when South Korea's top court ordered Japanese companies to pay compensation for forced labor during the 1910-1945 period of colonial rule.

The court rulings drew a strong backlash from Japan, which argues that South Korea relinquished all rights to wartime claims in a bilateral agreement signed when the countries normalized ties in 1965.

The administration of South Korean President Moon Jae In says that while it still respects the agreement, it cannot overturn the decision of another branch of government.

Motegi said he repeated calls for South Korea to address the issue, though Kang did not offer any concrete solutions in the meeting. The two agreed to continue dialogue, he said.

Relations have shown signs of improvement in recent months, after Seoul suspended its decision to terminate a military intelligence-sharing pact with Tokyo.