Japan and the United States pledged Sunday to strengthen their alliance to deal with an evolving security environment in the Asia-Pacific region, as they marked the 60th anniversary of the signing of their security treaty.

But they appeared out of sync on how to do that, as U.S. President Donald Trump put veiled pressure on Japan to make a bigger contribution in the face of China's military buildup and North Korea's nuclear threat.

At a commemorative reception in Tokyo, Prime Minister Shinzo Abe said, "Today, more than ever, the Japan-U.S. security treaty is a pillar that is indestructible, a pillar immovable, safeguarding peace in Asia, the Indo-Pacific and in the world, while assuring prosperity therein."

The alliance should become even more robust, Abe said, to "safeguard freedom, liberty, democracy, human rights and the rule of law, one that sustains the whole world, 60 years and 100 years down the road."

But shortly before the reception, Trump made a subtle push for Japan to step up its role. "I am confident that in the months and years ahead, Japan's contributions to our mutual security will continue to grow, and the alliance will continue to thrive," he said in a statement.

The treaty is the basis for the U.S. military's stationing of some 54,000 troops in Japan. Along with U.S. bases, Japan also hosts the Ronald Reagan, the only American aircraft carrier to be homeported abroad.

Their placement is aimed at allowing U.S. forces to respond quickly to contingencies in a region where China is increasing its military clout and where North Korea has conducted repeated missile tests. In return, they are obligated to protect Japan from threats together with the country's Self-Defense Forces. 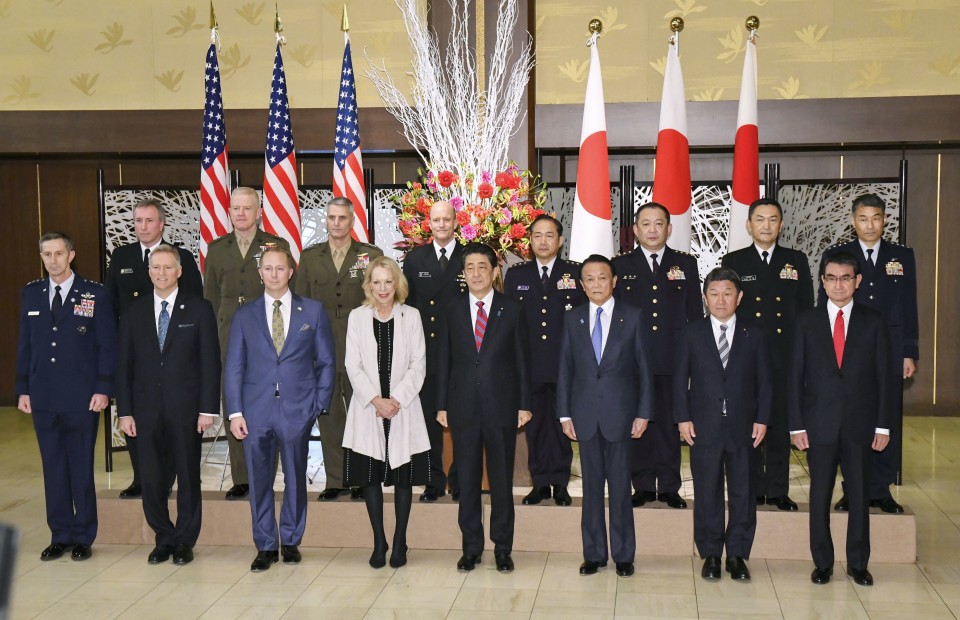 Trump called the alliance "rock-solid" and acknowledged that it has been "essential to peace, security, and prosperity" for both countries and the region over the past six decades.

But he has been critical of what he perceives as the "one-sided" nature of the treaty, arguing that Tokyo should pay a larger share of the cost of hosting U.S. forces.

In June last year, Trump complained that under the pact, even if the United States were attacked, Japan would not be required to help and could "watch it on a Sony television."

The alliance has faced domestic criticism, too. Some point to Japan's sitting under the U.S. nuclear umbrella as being at odds with the country's efforts to abolish nuclear weapons as the world's only victim of an atomic bombing.

There is also persistent local opposition to hosting U.S. forces in Okinawa, which is home to about 70 percent of the total area of land exclusively used by U.S. military facilities in Japan, amid repeated accidents and cases of assault and rape by American troops.

Still, the foreign and defense ministers of Japan and the United States said Friday in a joint statement that the alliance "has played and will continue to play an integral role in ensuring the peace and security of our two countries, while realizing our shared vision of a free and open Indo-Pacific."

Signed in 1960 by the governments of then Prime Minister Nobusuke Kishi -- Abe's grandfather -- and then President Dwight Eisenhower, the Treaty of Mutual Cooperation and Security between Japan and the United States replaced a 1951 agreement that helped form the basis of relations between the countries following the end of World War II.

The revised treaty removed a clause in the earlier version that allowed the United States to intervene to quell insurgencies within Japan, and made explicit Washington's obligation to defend Japan from an armed attack.

Abe has worked to boost Japan's role in the alliance, in 2014 removing an outright ban on exporting weapons and reinterpreting the pacifist Constitution to allow the SDF to protect allies in certain situations under collective self-defense.

Lt. Gen. Kevin Schneider, commander of U.S. forces stationed in the country, said at Sunday's reception that "with the rapidly evolving security situation in the region, the importance of the U.S.-Japan alliance grows stronger and more important every day."

"We continue to train and adapt our forces with our 'jieitai' (SDF) partners and I look forward to supporting the continued growth and integration of our combined capabilities."

Also attending on the American side were Joseph Young, charge d'affaires of the U.S. Embassy in Japan, and Mary Eisenhower, the former president's granddaughter.