Japanese Prime Minister Shinzo Abe on Monday urged all parties involved to step up diplomatic efforts to avoid escalating tensions in the Middle East, saying he is "deeply concerned" about the current situation.

During his first press conference of the year, Abe said Japan will continue with its diplomatic efforts while indicating no change in Tokyo's plans to send Self-Defense Forces personnel and assets to the region to ensure the safe navigation of commercial ships.

Abe's remarks came amid a recent spike in tensions after a U.S. airstrike on Baghdad killed top Iranian general Qasem Soleimani last week. Iran has vowed to retaliate, while U.S. President Donald Trump has warned of further responses if Iran does so.

"With heightened tensions in the Middle East, I'm deeply concerned about the current situation," Abe said after visiting the Ise Jingu shrine in Mie Prefecture.

Japan's naval dispatch to Mideast seen as "product of compromise"

Iran's Rouhani calls on Japan to help save nuclear deal

"A further escalation of the situation should be avoided and I ask all parties involved to exhaust diplomatic efforts to ease tensions," Abe said.

Iran and the United States have been locked in a standoff over a 2015 nuclear accord meant to curb Tehran's nuclear activities in exchange for the lifting of sanctions.

Washington pulled out of the landmark deal and re-imposed economy-crippling sanctions. Tehran said Sunday it was no longer abiding by uranium enrichment limitations under the agreement. 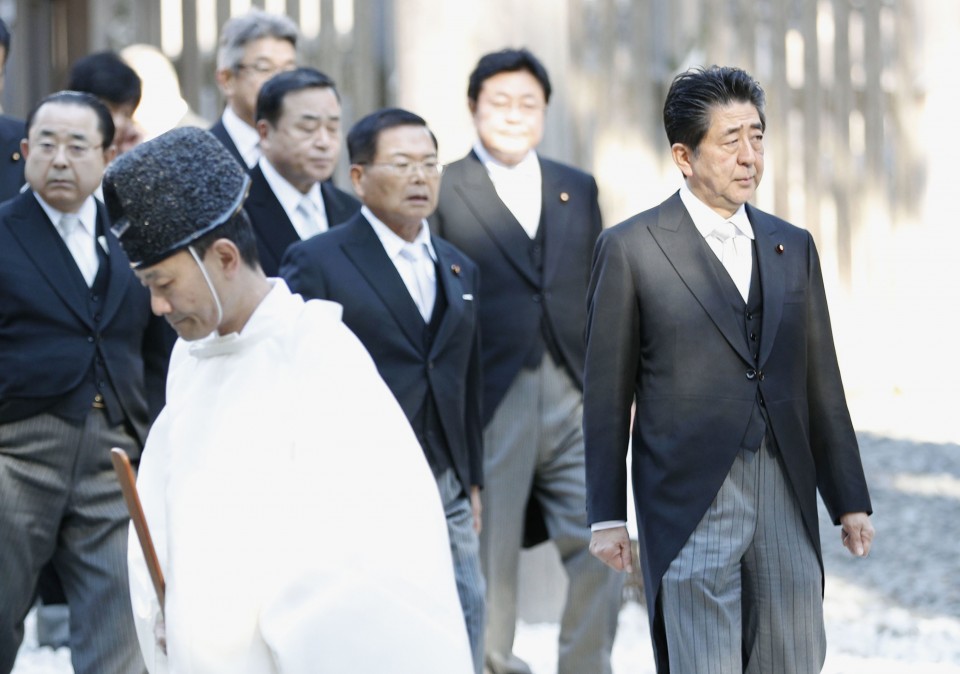 Japan has good relations with both the United States and Iran. As resource-scarce Japan gets most of its crude oil imports from the Middle East, it sees stability in the region as critical.

With Tehran and Washington in mind, Japan has been treading carefully in drawing up the SDF dispatch plan. It will not join a U.S.-led maritime security initiative near the Strait of Hormuz, but an SDF destroyer and patrol planes will engage in intelligence gathering in areas outside the strait.

Sending the SDF overseas is a divisive issue in Japan under the nation's pacifist Constitution, which Abe and the ruling Liberal Democratic Party hope to amend for the first time since it went into effect in 1947.

Abe, whose current term as LDP president ends in September 2021, told the press conference that he is determined to revise the Constitution and is calling for an "active" debate between the ruling and opposition parties on constitutional reform.

On other priority areas, Abe said Japan will exercise its leadership in expanding the 11-member Trans-Pacific Partnership free trade pact and in concluding negotiations to create an Asia-side trade zone under the Regional Comprehensive Economic Partnership.

He also pledged to reform the country's social security system amid Japan's rapidly graying society so all generations can benefit from the program.