Hakuho started his pursuit for a record-extending 44th career championship on a winning note on Sunday, while fellow grand champion Kakuryu suffered a shocking defeat on the opening day of the New Year Grand Sumo Tournament.

Hakuho seized komusubi Daieisho's belt with his right hand following the initial clash and easily forced the komusubi out in the final bout of the day at Tokyo's Ryogoku Kokugikan.

With the win, the Mongolian-born yokozuna was able to exact revenge for a loss to Daieisho at the previous tournament in November. Hakuho, who won in Fukuoka with a 14-1 record, has not won the New Year basho since 2015. He has revealed his long-term goal of capturing 50 Emperor's Cups. 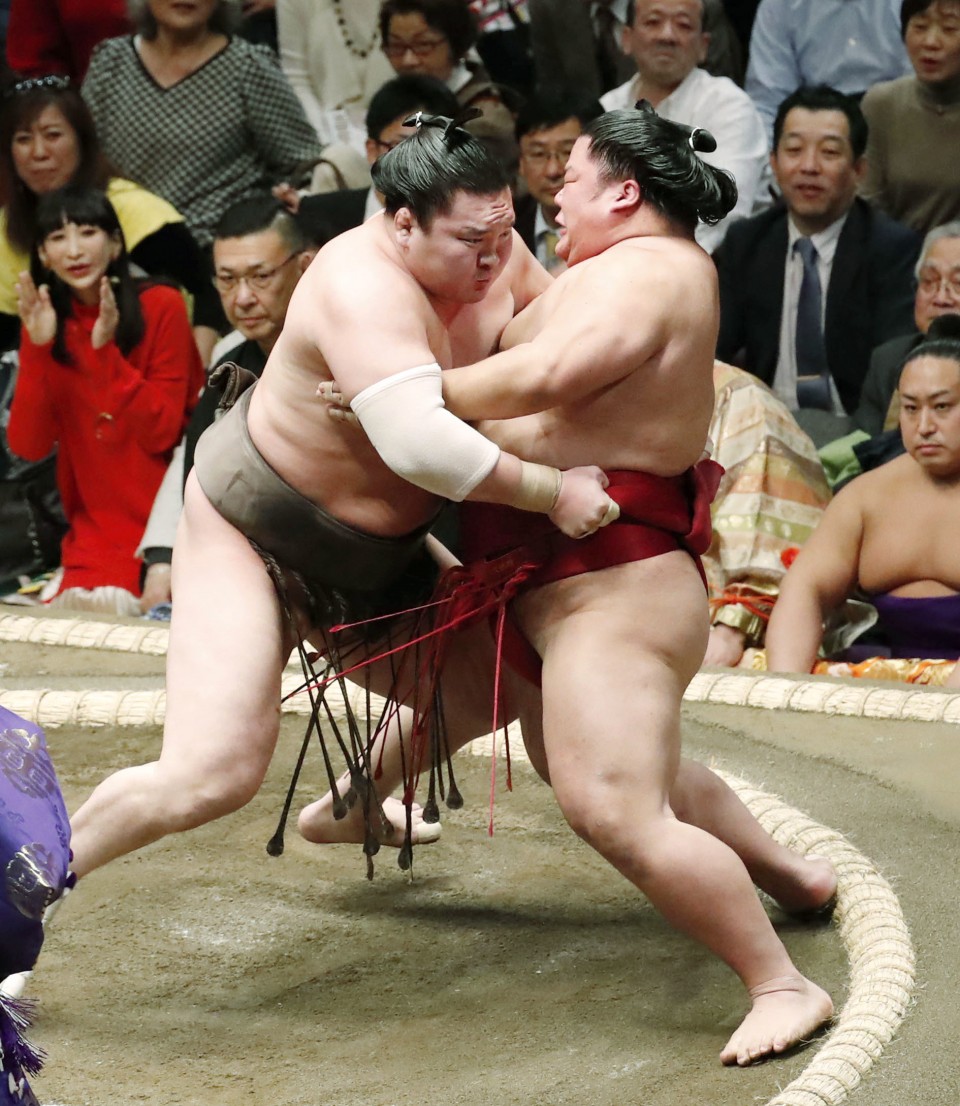 In the day's penultimate bout, yokozuna Kakuryu lost to No. 1 maegashira Endo and failed to make a winning return from injuries that forced him to withdraw from two previous meets.

While his health and fitness remained in question after suffering a cold at the end of the year, the Mongolian yokozuna stepped back out of the ring under pressure as he tried to execute a slap down.

While Hakuho and Kakuryu suffered mixed fates on the opening day of the 15-day meet, the younger stars also enjoyed a share of the spotlight.

In one of the most anticipated bouts of the day, sekiwake Asanoyama beat No. 2 Mitakeumi in his first bout in the sport's third-highest rank. 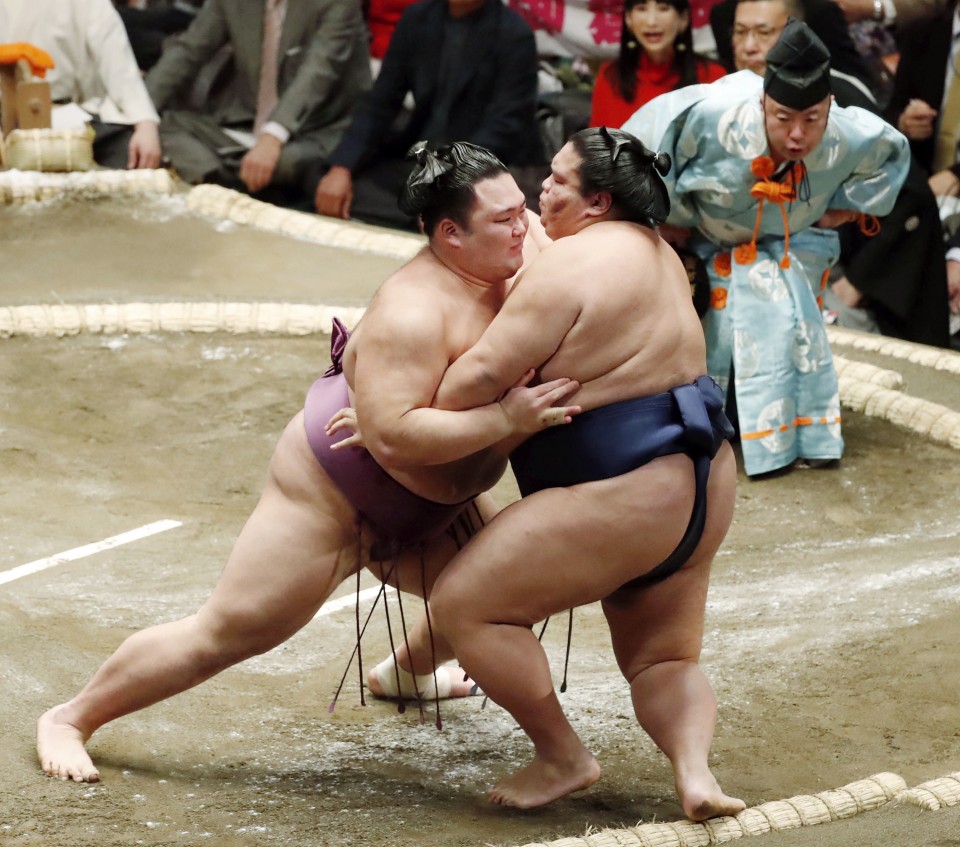 The 25-year-old Asanoyama was bulldozed toward the edge by Mitakeumi, who is fighting as a rank-and-file wrestler for the first time since January 2017. But the young sekiwake remained firm and held Mitakeumi's belt with both hands before shoving him out.

Ozeki Takakeisho, the youngest wrestler in the top-flight makuuchi division at 23, easily dispatched No. 1 Myogiryu. Takakeisho resisted Myogiryu's slaps, and calmly pushed out his 157-kg opponent.

Fan-favorite Takakeisho is gunning for his second championship.

No. 5 Enho, the lightest makuuchi division wrestler at 99 kilograms, received a huge ovation after he overcame a 69-kg disadvantage against No. 6 Takarafuji, who appeared to have the advantage from the start. Following a stalemate in the center of the ring, Enho resisted Takarafuji's attempt for a left-handed belt hold and threw him down. 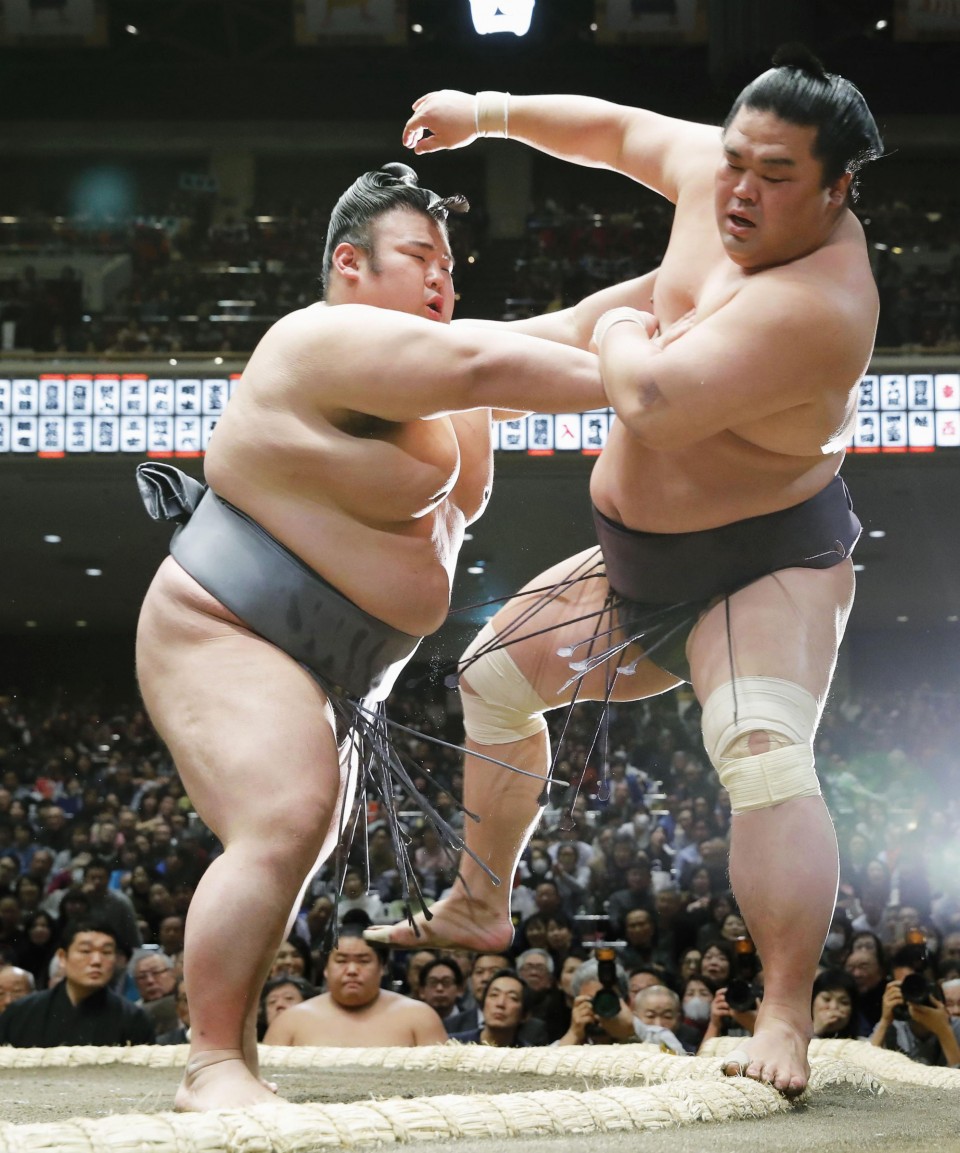 Takayasu, who needs 10 wins to earn re-promotion to ozeki, was quickly shoved out by No. 3 Tamawashi, the 2019 New Year champion.

No. 17 Kiribayama, the tournament's only makuuchi-division debutant, survived a scare against former sekiwake Kaisei for his first win on the elite division.