Popular No. 1 maegashira Endo brought Tokyo's Ryogoku Kokugikan to its feet on Monday with a stunning upset of yokozuna Hakuho on the New Year Grand Sumo Tournament's second day.

It was the second yokozuna scalp for Endo at the 15-day tourney. Coming off a win over Mongolian grand champion Kakuryu on Day 1, the 29-year-old dodged Hakuho's opening charge. Although Hakuho quickly reacted, he appeared to go into panic mode and three times failed to execute a throw.

On the final try, Hakuho (1-1) lost his balance and fell over backward. Cushions flung from the stands rained down upon the raised ring, while the crowd stood and chanted Endo's name.

Endo said he had not expected Hakuho to try and get around him on the charge. 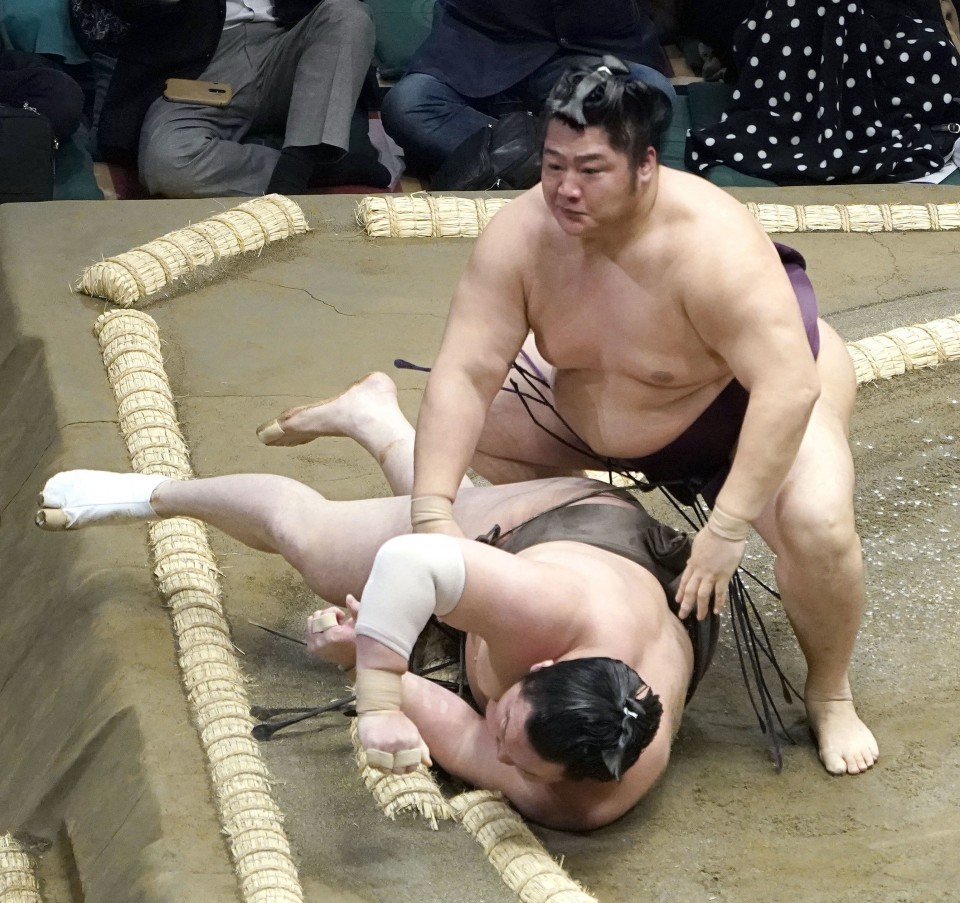 "My concentration was really good and I was able to react," said Endo, who scored his second win against Hakuho in 13 career bouts.

Like Hakuho, 23-year-old ozeki Takakeisho paid the price for trying to get around his opponent on the charge. With the ozeki aiming for Hokutofuji's right shoulder, the No. 2 maegashira pivoted to his right and easily shoved him out.

"The ozeki is really strong on the charge. He has favored a left-side attack and I was determined to hold my own," Hokutofuji (2-0) said.

Goeido, who needs eight wins to retain his ozeki ranking after going winless in November, charged No. 2 Mitakeumi (1-1) back to the straw but let him slip away and was instead forced out to a second loss.

Sekiwake Takayasu earned the first of 10 victories he will need to regain his lost ozeki status with some of his trademark tip-toeing along the straw bales. Instead of being shoved out by No. 4 Okinoumi (1-1), Takayasu performed a tight-rope walk along the ring's edge while the maegashira lost his balance and stepped out.

New sekiwake Asanoyama improved to 2-0 by shoving out No. 3 Tamawashi (1-1). Asanoyama was being swung out of the ring, but the Mongolian maegashira lost his grip and instead found himself being shoved out from behind.

A day after Enho escaped from a dire disadvantage to come away with his first victory of the meet, Shodai quickly immobilized his lightweight opponent. Enho lunged around Shodai's left for a belt hold on the charge, but came up empty and instead walked into a headlock.

With his opponent gripping the back of his belt, Enho tried to wriggle away but only managed to fall backward as Shodai attempted an overarm throw.

Kiribayama (1-1), who earned his first promotion to the elite makuuchi division by winning his last five bouts as a juryo-division wrestler in November, tasted his first defeat of the new year. The No. 17 maegashira was slapped down by No. 2 juryo Kotonowaka (1-1).

Former ozeki Tochinoshin evened his record as a No. 6 maegashira at 1-1 with a laborious shove-out win over No. 7 Onosho (0-2).