The Japanese Olympic Committee's target of 30 gold medals at the 2020 Tokyo Olympics is, at a glance, beyond the reach for the hosts whose best tally to date is 16 from the 1964 and 2004 Games.

But with the four added sports giving Japan's talented crop of athletes 16 new gold medal opportunities, reaching the target may be a viable possibility.

Kanoa Igarashi, 22, is well on course to represent his parents' homeland in surfing having placed sixth in this season's World Surf League's Championship Tour for a decisive top-10 finish. 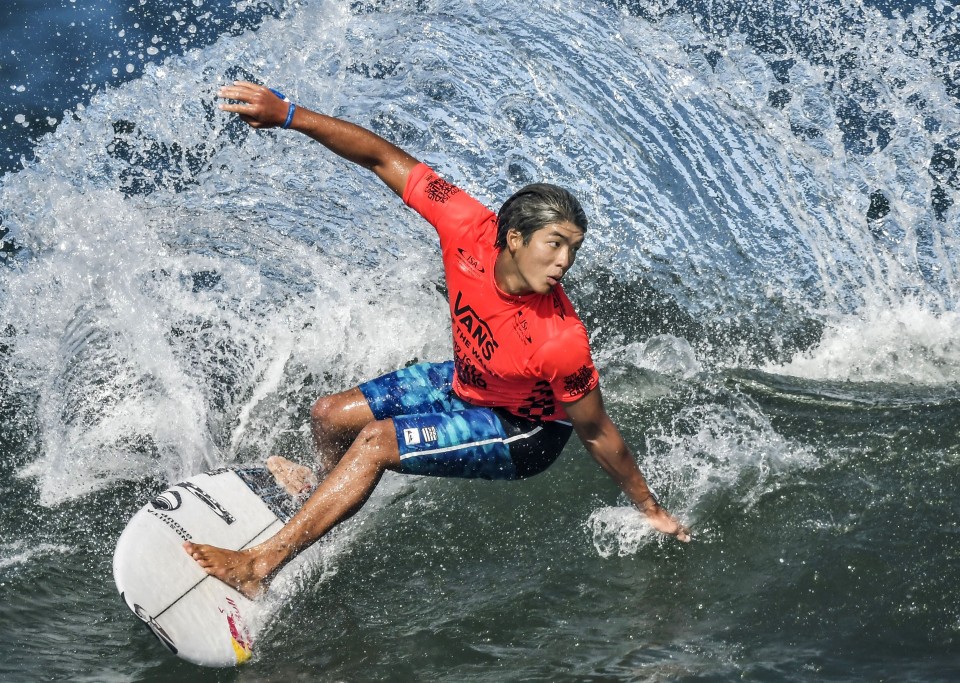 Born in the sporting hotbed of Huntington Beach, California, and a dual citizen of Japan and the United States, Igarashi took to the water at 3 and went on to represent his birth country before switching his allegiance to Japan in 2018.

He rides a red and white board in honor of the Japanese flag and hair dyed golden blonde as a show of his national and medal aspirations.

"Winning the gold medal is my target for 2020," Igarashi, who won his maiden CT event this year, said in November when he made a trip to Japan and had a look at the Tsurigasaki Surfing Beach, the site of the Olympic break, in Chiba.

"I surfed there a few times when I was 10 or 11 before turning pro, so it reminded me of my time as a kid," he said. "There's the Olympics there so it was more of a preparation. It was a good practice, I'll keep readying myself and look forward to it."

Formidable rivals including last year's CT winner Gabriel Medina of Brazil are likely to lie in wait, but Japan team manager Tomijiro Munakata reckons the stage is set for Igarashi, who is adept on the smaller waves expected on the coastline near Tokyo.

"He's growing in stature as the games near. He's not making mistakes technically, isn't losing out when tussling for waves and gets the heat going at his rhythm," he said of Igarashi this season. "There'll be home support, he has the talent so he ticks all the boxes to get the gold."

The race for the one women's spot likely available sees Shino Matsuda, 17, in the lead after she came 15th at the World Surfing Games, the best among Asian surfers. Mahina Maeda and Sara Wakita are also in contention alongside 18-year-old Amuro Tsuzuki, who secured promotion to next year's Championship Tour.

Skateboarder Misugu Okamoto, who will be 14 years old when games come around, will likely be Japan's youngest athlete next summer. She is gunning for history in women's park and will take some stopping.

Four wins out of four qualifying events that started with the Dew Tour in California in June see her flying atop the qualifying rankings, one place above compatriot and last year's worlds winner Sakura Yosozumi, 17. 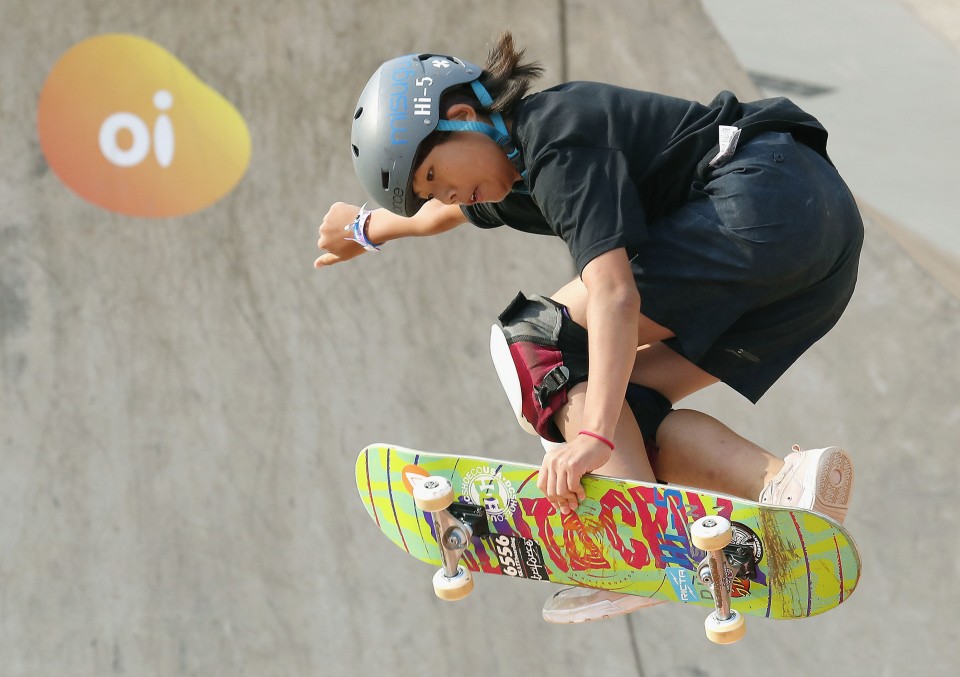 "I want to keep skating the way I aspire. My dream is to keep producing on the world stage," said Okamoto, who started skating at 8. Her frontside 540 -- a rarity in women's skateboarding -- coupled with big airs has given her an edge over the rest.

Amazingly, Okamoto may not even be the youngest medal chance at Ariake Urban Sports Park with British skater Sky Brown, a 12-year-old born to an English father and Japanese mother, looking to challenge the Japanese for a podium.

Raised in Miyazaki in southwestern Japan, Brown -- also a top-level surfer and dancer who has accumulated 440,000 Instagram followers -- placed third at the worlds behind the Japanese duo and is certain to add more to her fan base next summer.

Ayumu Hirano, 21, is bidding to add a men's park medal to his two Olympic silver medals won in snowboarding in 2014 and 2018. The multi-talented athlete has made a seamless transition into the bowl and is currently edging Kensuke Sasaoka in the qualifying rankings. 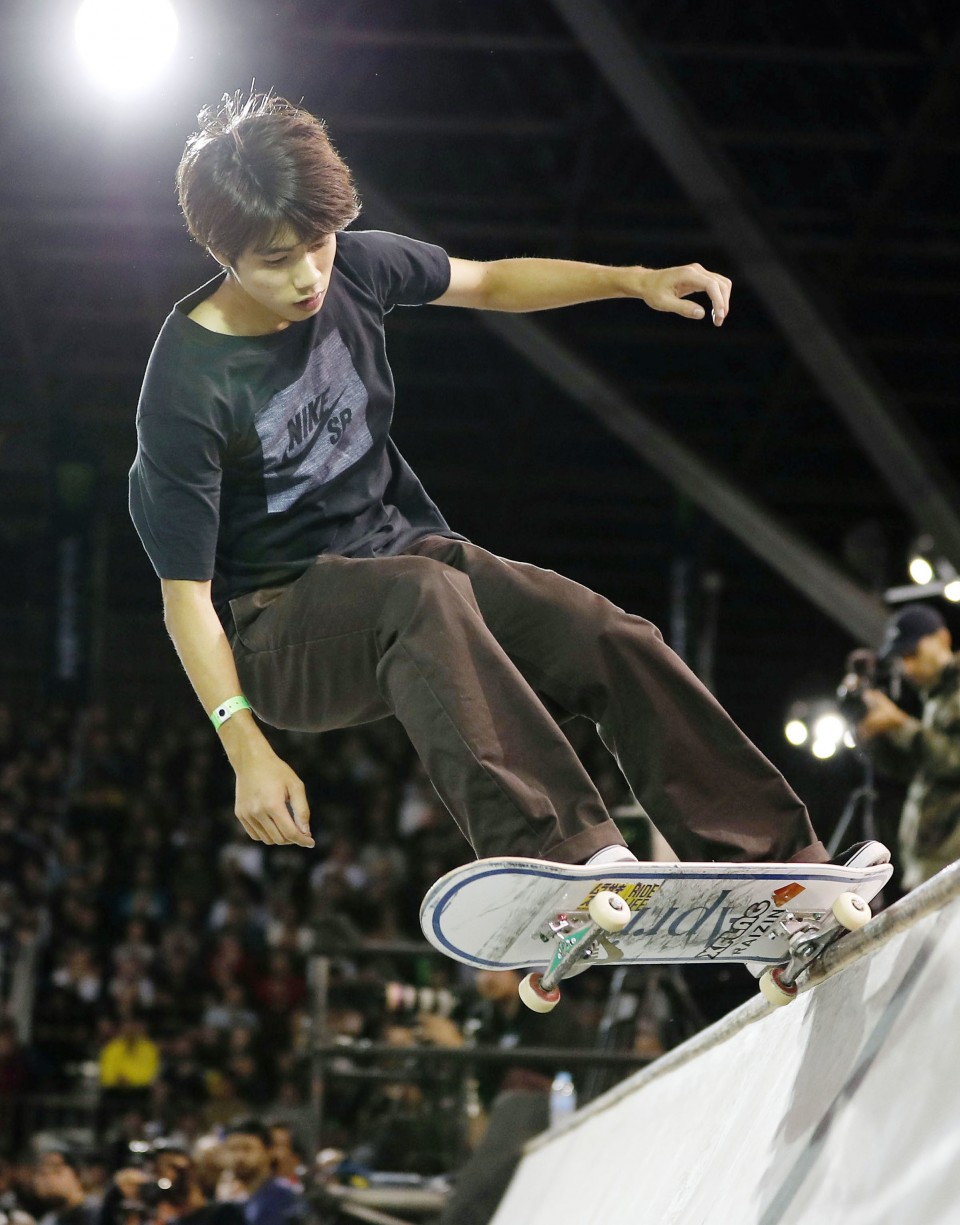 The winner of three Street League Skateboarding events last year, the low-key innovator Horigome came close to dethroning Huston at the worlds this September and eyes a win on the big stage.

"I don't really see anyone as a rival, I always focus on putting on the best performance I can," he said. "I love skateboarding and want to up my skill-level every day."

Sora Shirai, 18, will look to upset the two favorites should he gain selection, while Aori Nishimura, third in the women's rankings, will probably need to dislodge one of three Brazilians -- headed by current rankings leader Pamela Rosa -- to win a medal.

In sports climbing, Tomoa Narasaki and Akiyo Noguchi will be disappointed to leave Aomi Urban Sports Park with anything other than the top prize.

Narasaki, 23, won both the men's bouldering World Cup overall title and the world championships in 2016. He repeated the same feat this year, his triumph at worlds in August in Hachioji clinching his Tokyo Games spot. 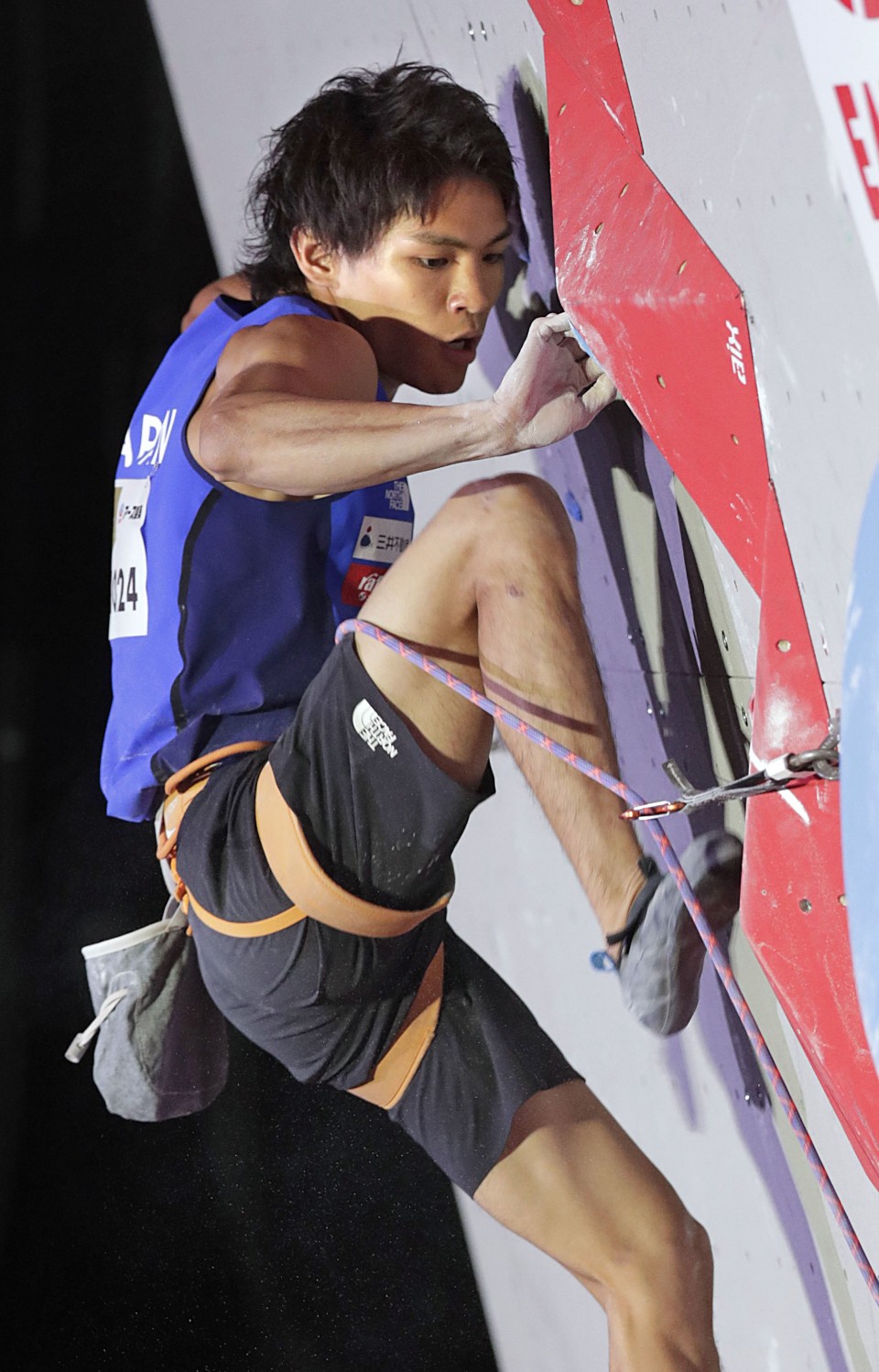 Each climber's rankings in three events -- speed, bouldering and lead -- are multiplied for a final score, with the climber with the fewest points ranked top. Narasaki has been working not just on his flashy, ninja-like bouldering moves, looking to make himself even more of a multifaceted threat.

The Japanese climbers' work on speed, their perceived Achilles heel, is bearing fruit with Narasaki finishing second in the opening leg of the combined event at worlds before winning bouldering and coming second in lead for a total of four points. Austrian Jakob Schubert was a distant second on 35.

It was less straightforward for Noguchi, 30, who ranked seventh in speed before winning bouldering and coming third in lead to finish second overall. Her improvement on the speed wall has been eye-catching, but the veteran knows she has the experience to grind things out in the latter two events. 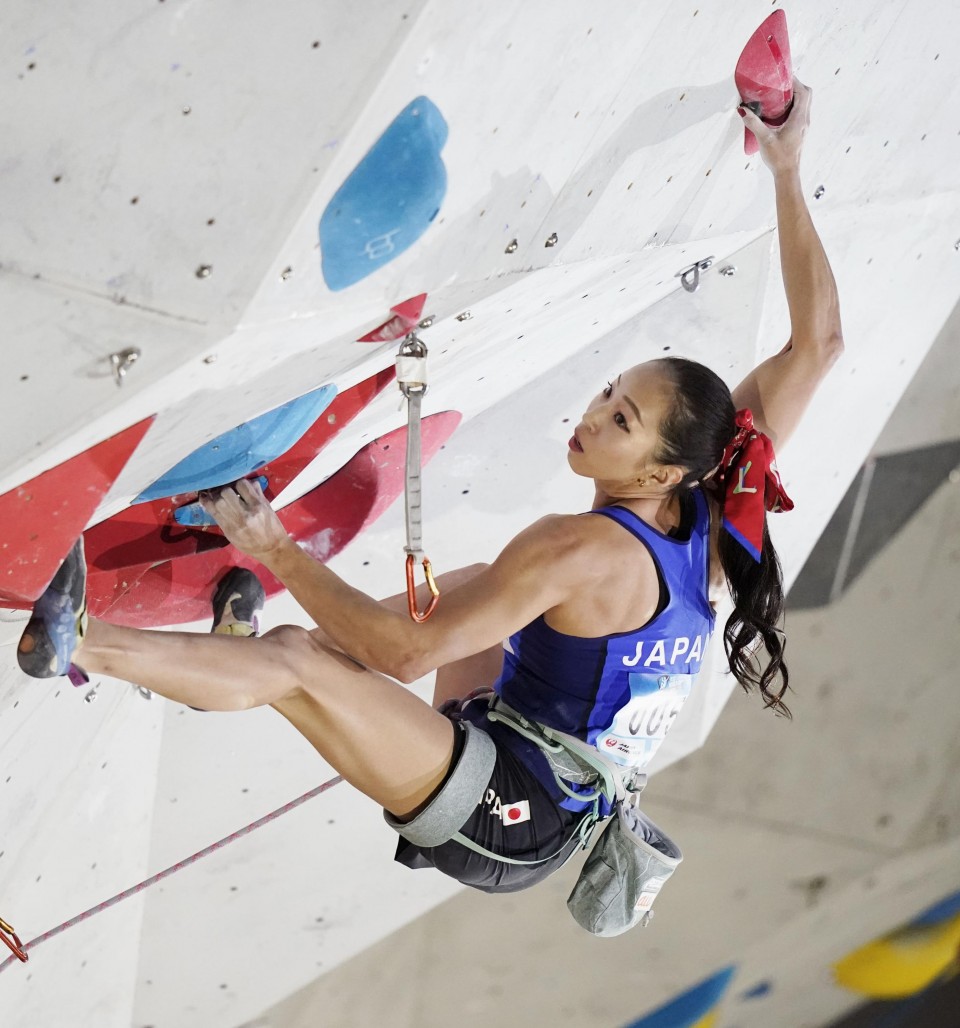 The first Japanese woman to make the World Cup circuit podium, coming third in lead aged 16 in 2005, Noguchi has since won four bouldering World Cup season titles to cement her place in the sport's history. She sealed her spot at the Tokyo Games at worlds as the highest-placed Japanese.

The biggest stumbling block will likely be Janja Garnbret, a 20-year-old Slovene who won combined at the 2018 and 2019 worlds both ahead of Noguchi in second. But the Japanese is up for what she says will be her final competitive appearance.

"It'll be the first Olympics for all the climbers and I want to enjoy it," she said. "And as it'll probably be my last day (as a competitive climber) I want to climb my way befitting of my career finale."

A medal in karate will prove a rare commodity with the International Olympic Committee pulling the pin on the ancient martial art for the 2024 Paris Olympics.

The kata discipline, in which athletes demonstrate different choreographed sequences of karate techniques in each round of a tournament, features probably the most-likely gold medalist among all Japanese athletes in Ryo Kiyuna. 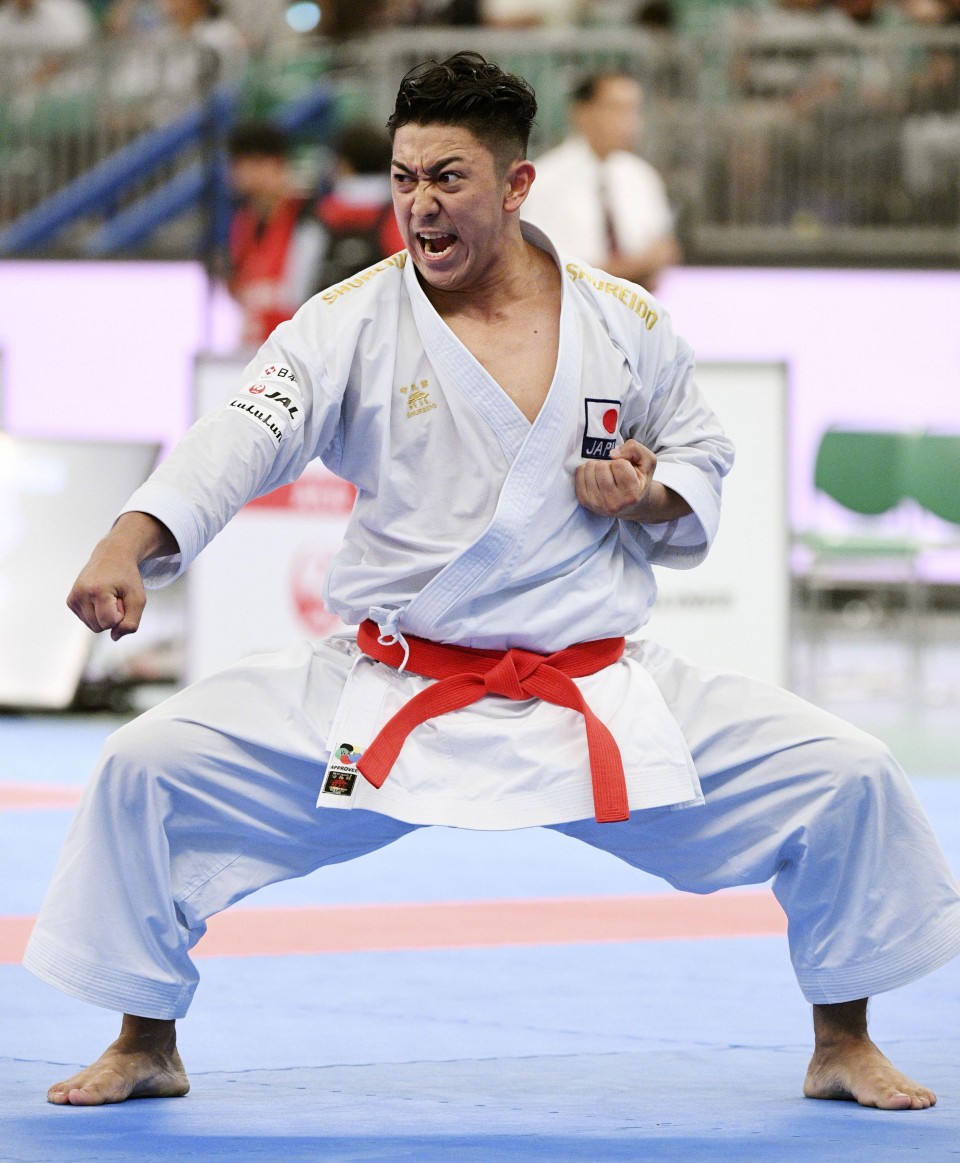 Hailing from Okinawa Prefecture, the 29-year-old has virtually swept all the tournaments he has taken part in. The three-time world and eight-time national reigning champion has just one defeat since 2014, his overwhelming aura and physique unrivaled.

"I've again managed to win all the tournaments (I took part in) this year. I'll be back training for the next year not slacking off. I'll win," Kiyuna said on an iconic meet at Nippon Budokan.

Kiyo Shimizu, 26, won the women's kata world title in 2014 and 2016 but has been knocked off her perch by 38-year-old Sandra Sanchez. The veteran Spaniard won worlds in 2018 and ended 2019 with a 6-3 record against the Japanese after going head-to-head in the finals of all nine tournaments in which they both participated. 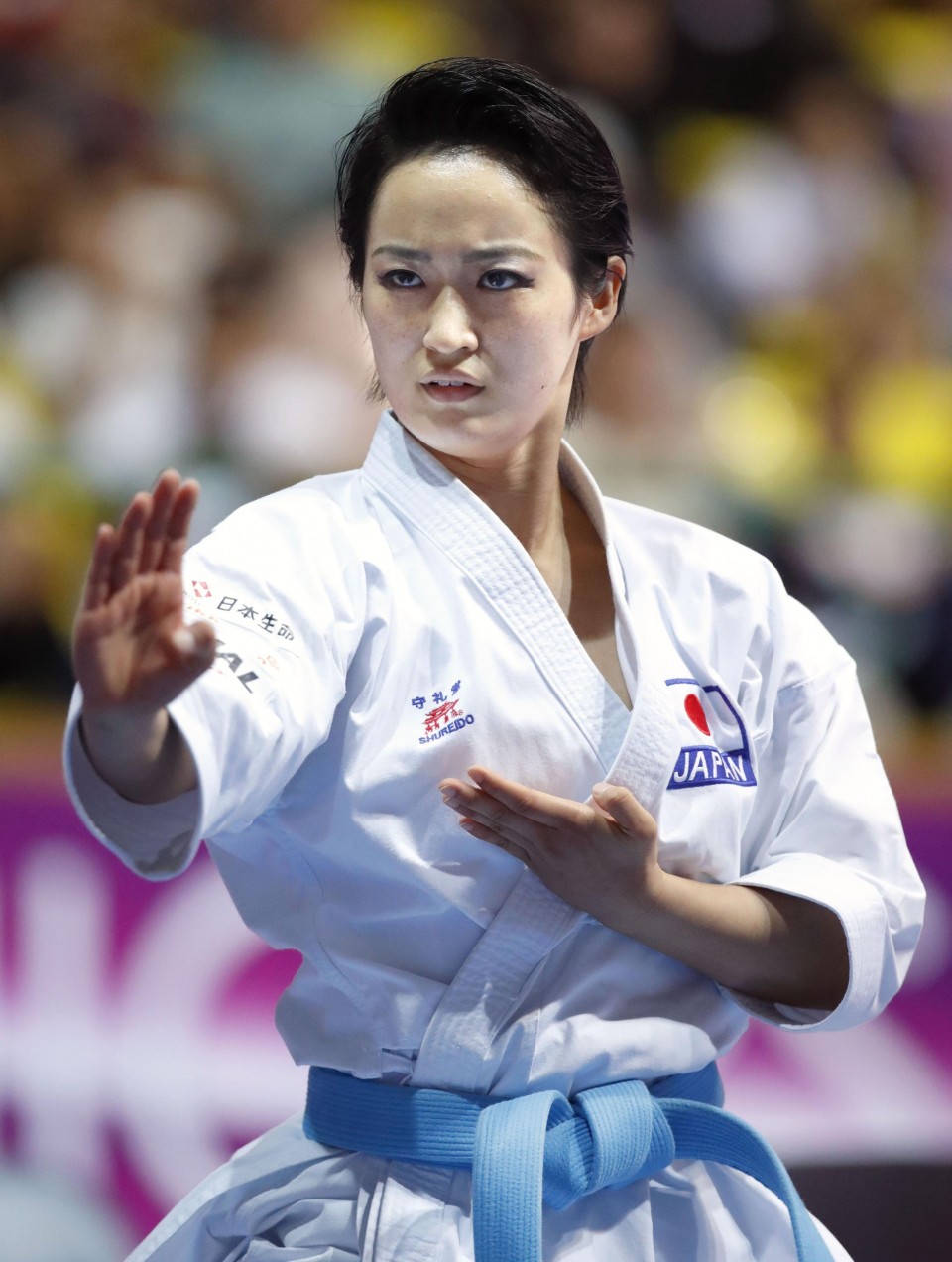 "I'm raising the level of all my kata to win the gold medal at the Olympics," Shimizu said. "I need to lay an even more solid foundation to allow myself to make simple moves, like my punches and kicks, stronger."

Things do not look as rosy in the sparring kumite discipline. Two wins from seven Premier League tournaments see Ken Nishimura, who is assured of an Olympic place, in the men's 75-kilogram class and world champion Ayumi Uekusa in the women's over-61-kg class offering Japan's best shots.