A Japanese aid group said Monday it will continue its work in Afghanistan as its members paid tribute to local representative Tetsu Nakamura in his home prefecture of Fukuoka, five days after the physician was killed in an ambush in the country he devoted his life to.

The plane carrying Nakamura's body arrived at around 10 a.m. at Fukuoka airport, where members of the Peshawar-kai aid group had waited along with a group of Afghan residents on the island of Kyushu, holding flowers and pictures of the renowned aid worker.

"We want to continue all the work Dr. Nakamura has undertaken," Peshawar-kai Chairman Masaru Murakami said at a press conference at the airport. "There will never be another person of the scale of Dr. Nakamura." 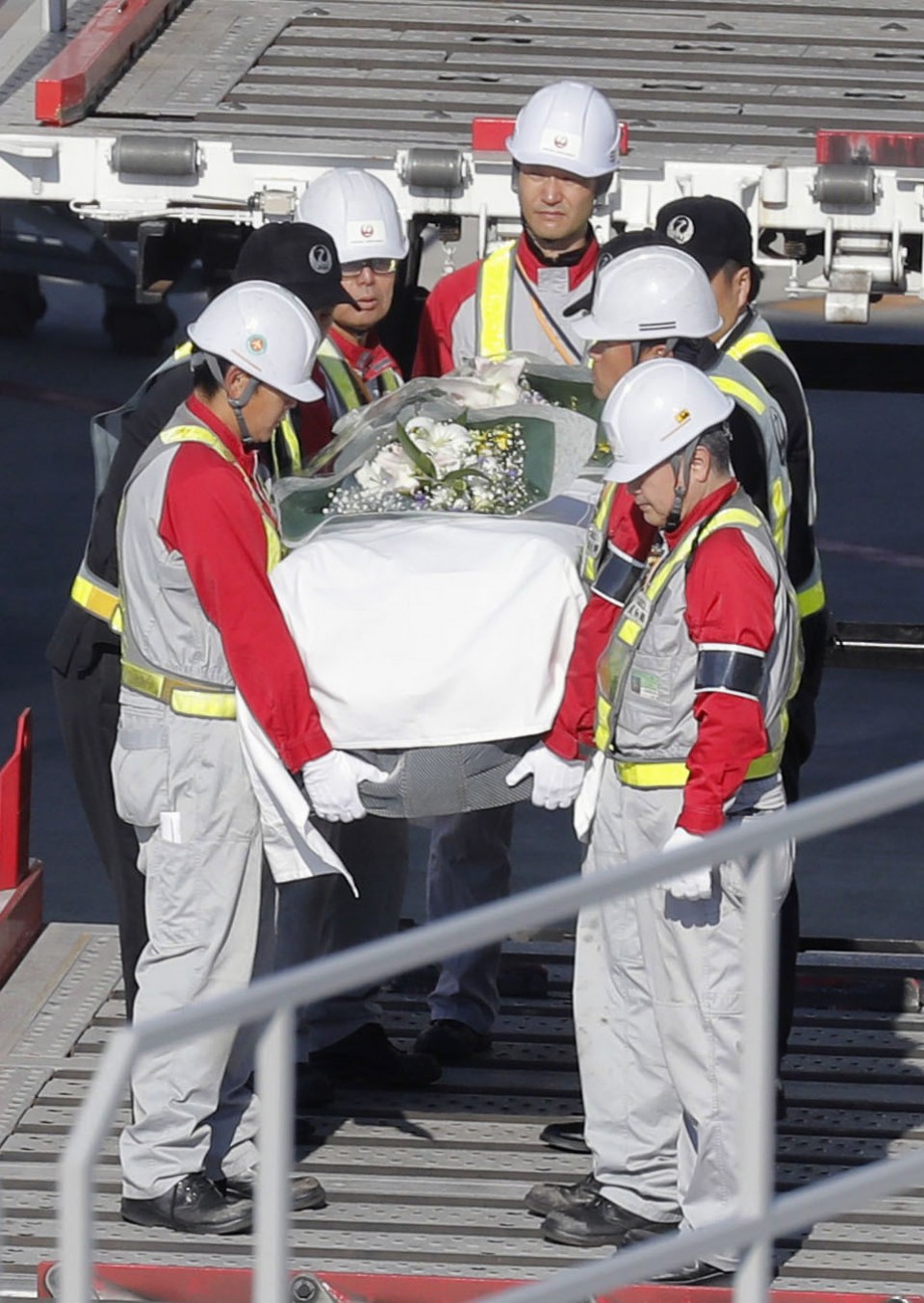 (The coffin of Japanese physician Tetsu Nakamura is unloaded at Fukuoka airport.)

"It has motivated us to further carry on with the group's work," he said, pointing to the messages of support the Fukuoka-based group has received from Japan and abroad since his death.

The 73-year-old doctor, a 2003 recipient of the Philippines' Ramon Magsaysay Award, dubbed the Nobel Prize of Asia, and five Afghans including his driver and bodyguards, were killed Wednesday when armed men attacked their vehicles in Jalalabad in the eastern province of Nangarhar.

In addition to providing healthcare, Nakamura was known for his active role in improving the irrigation system and transforming traditional agriculture in eastern Afghanistan.

"(Nakamura) must have had much more work he wanted to accomplish, but I just want to tell him 'good job,' and that he did enough," said Fumitaro Tamai, the doctor's 82-year-old cousin. "His achievements will continue to live on in Afghanistan."

Ahead of the plane's arrival, dozens of Afghan residents, some in traditional clothes and in tears, stood on the observation deck with homemade banners that read, "We're sorry we couldn't protect you," and "You are our hero!"

Other, written in Japanese, proclaimed "We will never forget what Nakamura-san did," and "We're deeply heartbroken and send our condolences." 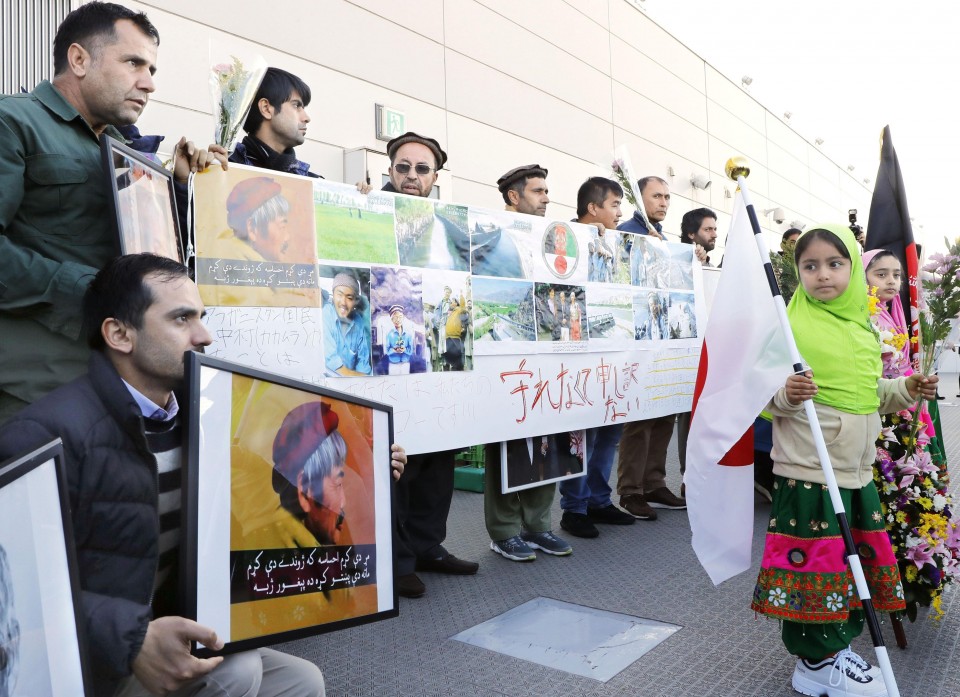 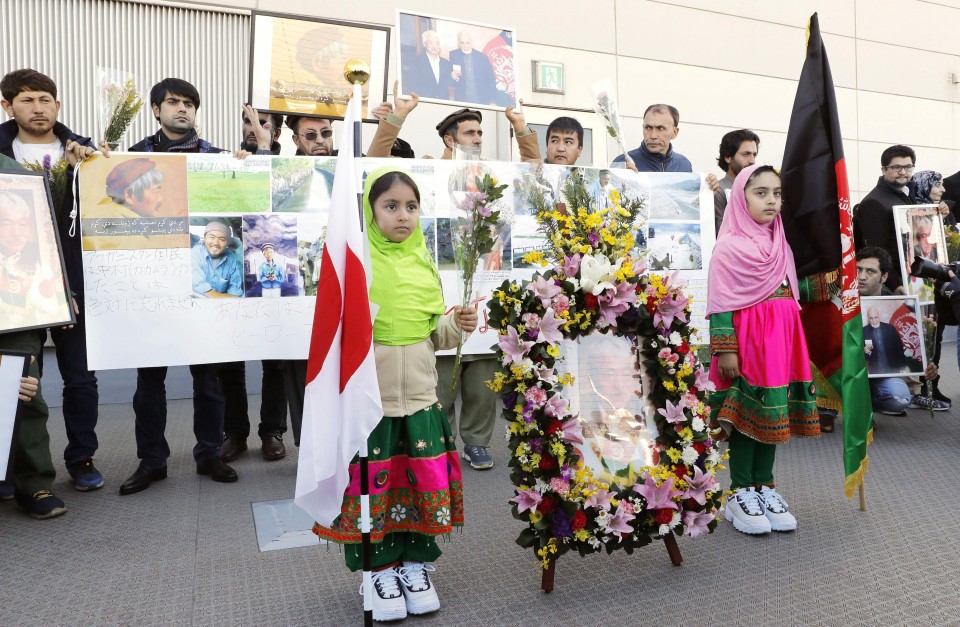 "Nakamura-san was a great individual who dedicated himself to Afghanistan," said Rasuly Ghani, 37, who runs a restaurant in Fukuoka Prefecture. "We came here because we wanted to honor him for his services. His death is truly regrettable."

The Peshawar-kai said funeral services will be held Wednesday in the city of Fukuoka.

Meanwhile, Japanese police are set to conduct an autopsy Tuesday to determine the cause of Nakamura's death and launch an investigation into his murder.

According to an Afghan health ministry official, the doctor underwent emergency surgery at a hospital in Jalalabad following the shooting, and was being moved to the airport for further aid when his wounds reopened. He died from significant blood loss, the official said.

On Sunday, the airplane carrying the body of Nakamura arrived at Narita airport near Tokyo around 5:30 p.m. The doctor's wife Naoko, 66, and oldest daughter Akiko, 39, as well as senior vice foreign minister Keisuke Suzuki laid flowers and observed a moment of silence as the coffin was unloaded at Narita.

Representatives of the Afghan Embassy in Japan were also among some 15 people who paid tribute to Nakamura at Narita airport, with some shedding tears as the physician's family laid flowers.

The civilian plane left Kabul on Saturday after the Afghan government held a ceremony at the airport, with President Ashraf Ghani joining soldiers in carrying the coffin. Ghani also met with Nakamura's family, who had traveled to the country to accompany the doctor's body back to Japan.

Authorities in Nangarhar have said they obtained information about a possible attack on Nakamura about a year ago and had assigned four bodyguards to protect him.

Anti-government militants, including the Taliban and Islamic State, operate in the province.

Shah Mahmood Miakhel, governor of the province, told reporters on Thursday there is evidence that the attack was planned outside Afghanistan, without elaborating. Further investigations are necessary, he added.

Body of doctor Nakamura arrives in Japan after shooting in Afghanistan