Japan's opposition parties on Wednesday ramped up calls for extending the current Diet session, saying the government lied about the existence of backup data for a guest list for a contentious cherry blossom viewing party this year.

The recent furor over the publicly funded event shows no signs of easing, despite Prime Minister Shinzo Abe's denials that he used it for personal gain and invited a former chairman of a company suspected of fraudulent business activity as a recommended guest.

"This is not going to end. We'd rather ask for an extension to the Diet session beyond the year's end," Jun Azumi, the Diet affairs chief of the main opposition Constitutional Democratic Party of Japan, told reporters. The current extraordinary session runs through next Monday.

"When electronic data are deleted, their backup data are kept for up to eight weeks," Suga said at a press conference.

Opposition party lawmakers have been calling for the disclosure of the guest list to shine light on what they view as the opaque selection process. The government has defied pressure from the opposition bloc, saying neither the list nor its electronic data have been retained. 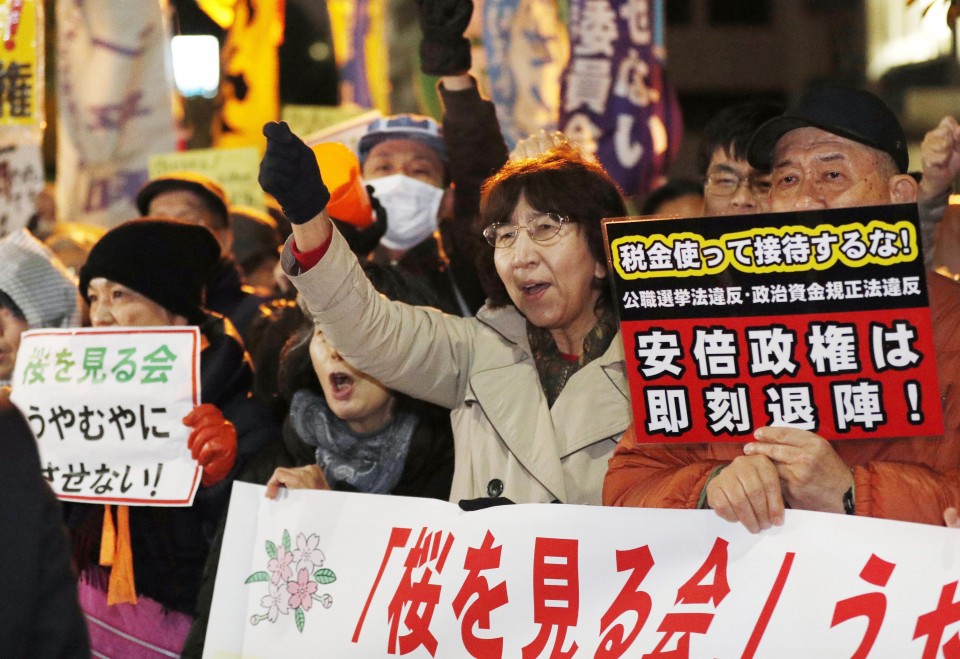 (People stage a rally in front of the Japanese prime minister's office in Tokyo on Nov. 28, 2019, accusing the Shinzo Abe administration of using a publicly funded cherry blossom viewing party for election campaigning for his ruling Liberal Democratic Party.)

The paper guest list for the annual cherry blossom party in April was shredded on May 9, just when an opposition party lawmaker requested its disclosure, while the electronic version was deleted between May 7 and 9, according to the government.

A senior official told a parliamentary session on May 21 that the data had already been deleted. Based on Suga's comments Wednesday that was likely not the case, leading the opposition forces to say a false statement had been made to the Diet.

Abe has also come under fire for remarks taken as placing the blame on a government employee with disabilities, who was in charge of shredding the guest list.

He told the Diet on Monday that it took some time for the government to discard the list because the employee had shorter working hours and a shredder large enough to dispose of the list was not available sooner.

The annual party has been held since 1952 to honor people such as athletes and celebrities for their accomplishments, but the number of guests and government spending has been on the increase under the Abe administration.

As a long-held practice, the prime minister, the deputy prime minister, as well as the chief and deputy chief Cabinet secretaries can recommend invitees. The government draws up a guest list based on such recommendations.

The four major opposition parties have agreed that a Budget Committee session needs to be held with the attendance of Abe to address the recent controversy.

Despite calls for extending the current parliamentary session, Hiroshi Moriyama, the Diet affairs chief of the ruling Liberal Democratic Party told reporters, "It's not on our mind."