The South Korean government, in a tweet last week, called Japan's "rising sun" flag a "flag of hatred," continuing a campaign to get the flag banned from being unfurled at game venues during next year's Tokyo Olympics.

The flag, which typically features a red sun and rays radiating outward, is regarded by some as a symbol of Japanese aggression and militarism, as it was the flag of the Imperial Japanese Army and Navy. Spectators sometimes unfurl it at sporting events in Japan and abroad. 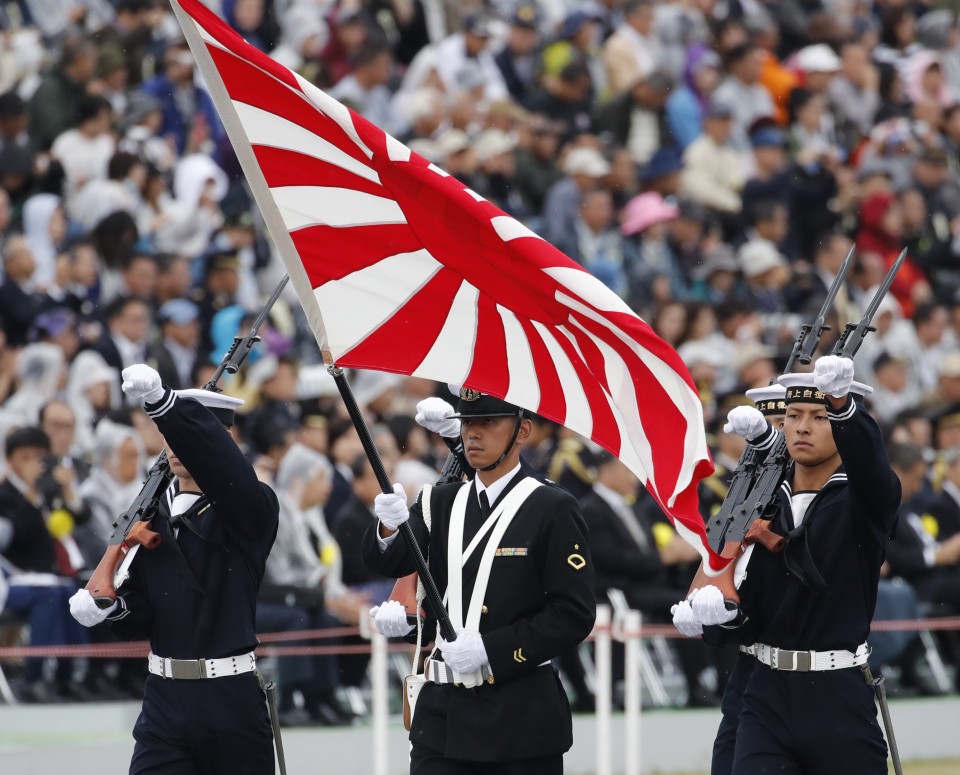 (Japanese Ground Self-Defense Force troops march with a rising sun flag during a review ceremony in Tokyo on Oct. 14, 2018.)

In a tweet last Thursday, the government said, "Please shout together. #BanTheFlag" "The Rising Sun flag is a flag of hatred. It is a flag used in anti-Korean rallies in Japan or in hate speech. Such a flag should not be used in Olympics, which is a symbol of peace and harmony."

The tweet, made in Korean likely with a domestic audience in mind, comes as Japan and South Korea continue to feud over wartime history, though the deterioration of ties over trade and security issues appears to have paused, with talks on Japan's export controls set for next week.

A spokesperson for the government said it has previously called the flag a "flag of aggression" on Twitter, and that it intends to continue communicating its position on social media.

The Japanese government has contended that the design of the flag symbolizes the sun as the Japanese national flag does, and that it has been widely used in Japan for a long time.

In September, the South Korean sports ministry lodged a complaint with the International Olympic Committee, claiming that the 16-rayed rising sun flag is comparable to the Nazi swastika.

The IOC, in a statement, has said, "When concerns arise at games time we look at them on a case by case basis."

Japan occupied a huge swath of China and colonized the entire Korean Peninsula until World War II ended in 1945.