South Korea's Constitutional Court on Friday took a pass on judging the constitutionality of a 2015 deal with Japan that aimed to financially help Korean women who were forced to work in the Japanese military's wartime brothels, but that proved deeply unpopular with South Koreans.

Under the deal, the two countries had agreed to "finally and irreversibly" settle the long-running bilateral feud, with Japan issuing an apology to former comfort women for their suffering and providing 1 billion yen ($9.1 million) to a foundation meant to help the victims financially.

In its decision, the court said the agreement reached in December 2015 was just a political accord that was verbally announced by the governments of the two countries, leaving its legal effect unclear.

Therefore no rights of plaintiffs to seek compensation were violated by the deal, and the court does not need to judge whether, by concluding the deal with Japan, the South Korean government had violated the country's Constitution, the court said.

The court acknowledged, however, that the "pain" former comfort women suffered as a result of the deal was "not at all light" given that the South Korean government had failed to sufficiently solicit their opinions while negotiating it with the Japanese government. 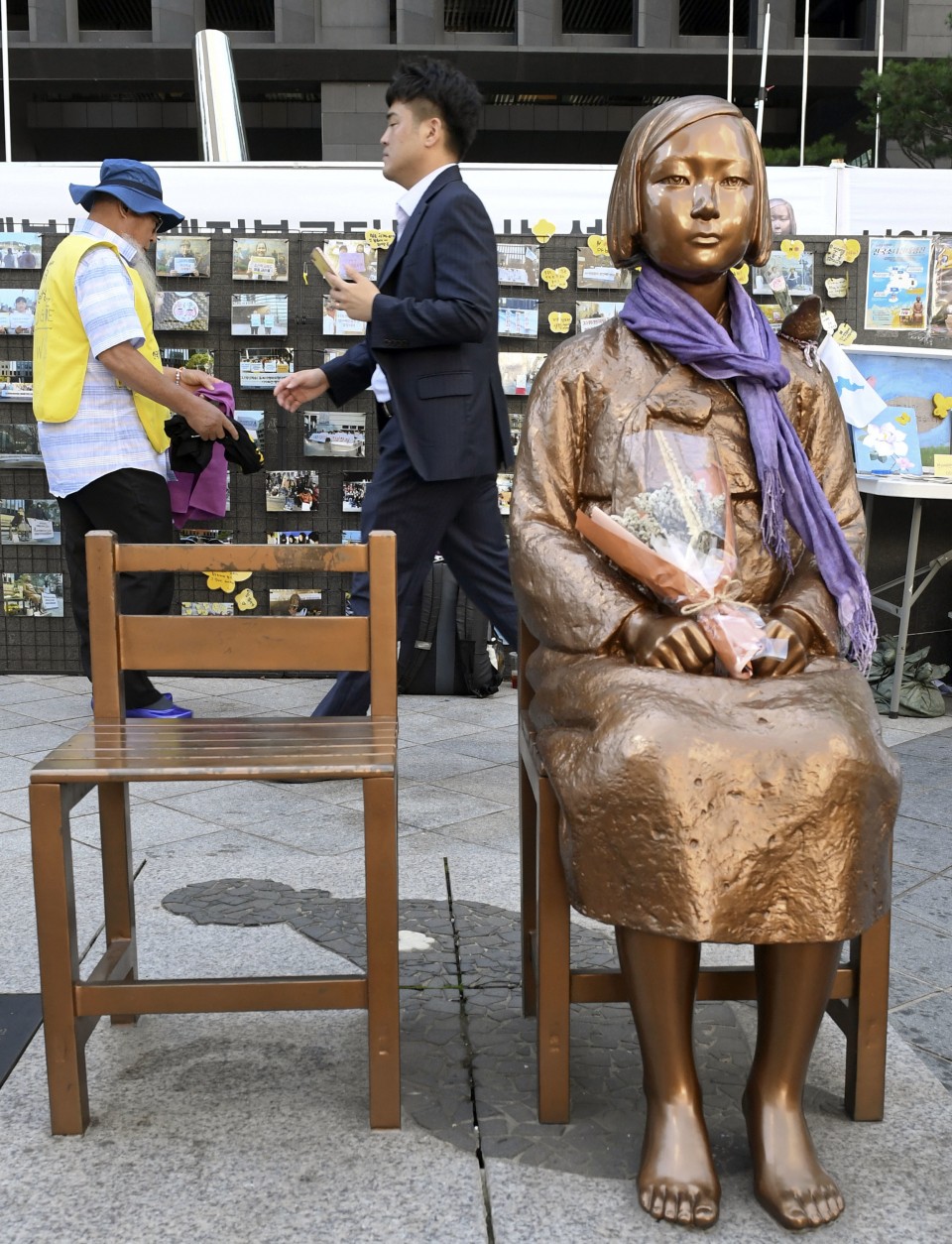 (Statue of a girl symbolizing the issue of "comfort women," who worked in Japanese wartime military brothels, in front of the Japanese Embassy in Seoul)

The court also said there is no common understanding between the two governments about what the comfort women issue is all about.

The agreement was negotiated and reached between the previous administration of President Park Geun Hye and the government of Prime Minister Shinzo Abe.

The administration of President Moon Jae In, which came to power after the deal, has criticized it, saying the agreement cannot settle the issue because it did not reflect the opinions of victims who remain alive.

A group of plaintiffs consisting of former comfort women and their family members filed a lawsuit in March 2016 asking the court to strike down the agreement as unconstitutional.

The plaintiffs argued that the deal had closed the door on their bid to seek reparations from Japan on the issue, thus violating their property rights and their right to receive diplomatic protection from the state.

"It could have been a chance to heal the victims who have been suffering from this for so many years," Lee Dong Joon, a lawyer for the plaintiffs, told reporters.

At the same time, Friday's decision did acknowledge that the 2015 deal fell short of being an official treaty, giving the plaintiffs more grounds to seek its nullification or renegotiation, Lee added.

The South Korean Foreign Ministry issued a statement saying that the government will respect the court's decision, and that it will continue to do its best to restore the surviving victims' honor and dignity and heal their pain.

The Reconciliation and Healing Foundation set up in South Korea under the agreement was used to provide cash to former comfort women. Of the 47 women who were alive when the deal was reached, 35 of them went on to receive the money, according to the South Korean government.

But some victims refused to take the money.

After the South Korean Supreme Court late last year ordered that Japanese companies compensate people who said they were subject to forced labor during the 1910-1945 period that Japan colonized the Korean Peninsula, bilateral relations sunk to their lowest level in decades.

While Japan argues the issue of compensation was settled "finally and completely" by a 1965 bilateral agreement, the court said personal claims are still valid. South Korea's government has refused to step in because of the separation of powers.

In July, Japan placed stricter stricter regulations on the export to South Korea of some materials needed to produce semiconductors and display panels, and then in August removed the country from a "white list" of trusted trade partners.

Seoul saw the move as retaliation for the court rulings, and struck back by announcing it would terminate a military intelligence-sharing pact with Tokyo.

In late November, relations took a turn for the better, with South Korea deciding not to terminate the pact and Japan somewhat softening its stance.

That was followed by the submission of a bill in the South Korean parliament to seek "voluntary" donations from citizens and businesses from the two countries to be used as compensation for wartime labor.

Last Tuesday, Moon and Abe held talks for the first time in about 15 months, though the meeting produced little substantive progress toward resolving differences over wartime labor compensation and Japan's tightening of export controls.