There was speculation that the Japanese and South Korean ministers might have formal bilateral talks during their stay in Beijing, but they just chatted for a few minutes, Kajiyama told reporters. He did not elaborate on what he talked about with Sung.

Tokyo and Seoul are seeking to mend their relations that have fallen to the lowest point in years amid a dispute over wartime labor compensation and export controls.

The three-way trade ministerial meeting is held on a rotating basis by the three nations. The last one took place in Tokyo in October 2016. 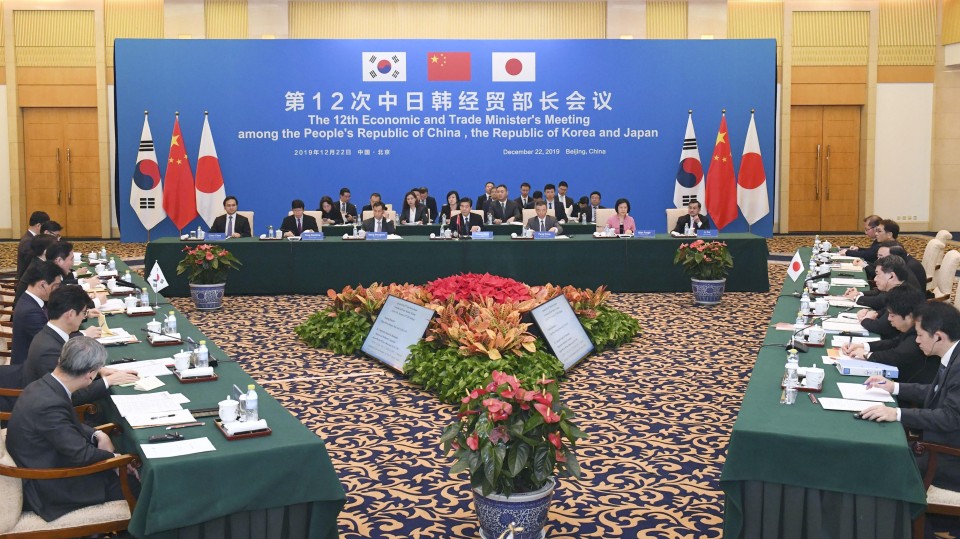 China, the chair of this year's trilateral gathering, has recently been keen to bolster economic cooperation with its neighbors such as Japan and South Korea, with its exports shrinking due largely to a tit-for-tat trade dispute with the United States.

Beijing, Tokyo and Seoul "should ensure peace and stability in the region and promote development and prosperity of the global economy," Zhong told his Japanese and South Korean counterparts at the outset of the meeting opened to the media.

Last month, however, RCEP leaders gave up on attaining their goal of sealing the pact by the end of the year, as India has been reluctant to lower its trade barriers, claiming that it has suffered massive trade deficits with China for many years.

Although India has warned that it could pull out of the deal, Kajiyama, at a joint press conference after the talks, called on India to continue participating in RCEP talks.

The RCEP, covering a third of the global economy, has a history of missed deadlines with varying degrees of ambition among the members. Negotiations began in 2013 with the initial goal of wrapping them up in 2015.

Accounting for half of the world's population, the RCEP also brings together the 10 Association of Southeast Asian Nations -- Brunei, Cambodia, Indonesia, Laos, Malaysia, Myanmar, the Philippines, Singapore, Thailand and Vietnam.