Japanese and South Korean lawmakers will cancel their annual meeting aimed at deepening bilateral ties this year following a controversial remark by a Korean lawmaker on Japan's emperor, a source close to the matter said Sunday.

The meeting was scheduled to be held in Japan this year but Japanese lawmakers are opposed to meeting South Korea's National Assembly Speaker Moon Hee Sang, who said earlier this year that Japan's emperor should apologize for Korean women being forced into its wartime brothels.

The decision comes after soured bilateral relations saw a pause in their deterioration last month as South Korea suspended its plan to terminate a military intelligence-sharing pact with Japan in a last-minutes decision. 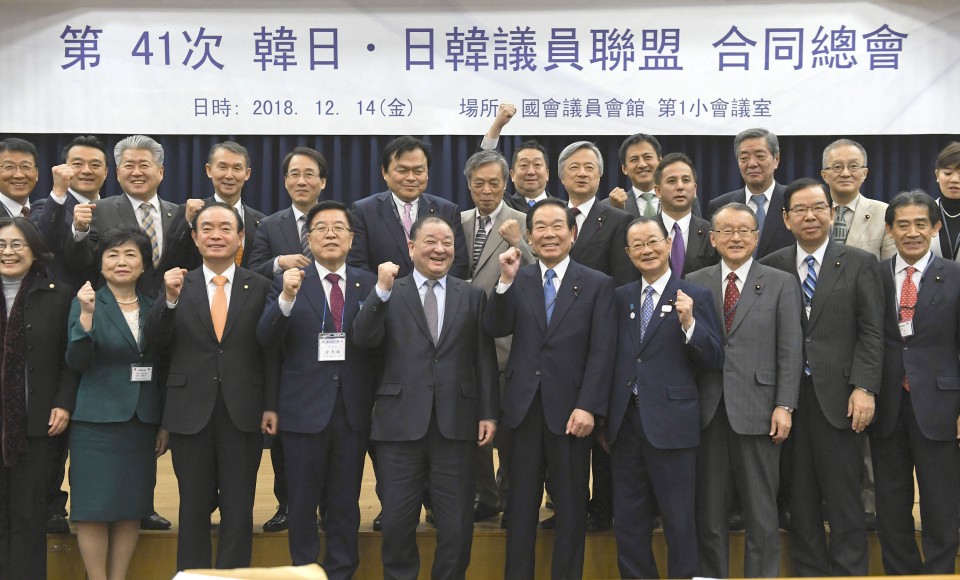 (Lawmakers of Japan and South Korea pose for photos during the closing ceremony of their meeting in Seoul on Dec. 14, 2018.)

The annual meeting was launched in 2016 to strengthen bilateral exchanges after Tokyo and Seoul struck a deal the previous year to "finally and irreversibly" resolve the dispute over such Korean women. As part of the deal, Japan decided to contribute 1 billion yen ($9.1 million) from its state budget in a foundation to be established by South Korea to provide support for those women.

In February this year, Moon drew a backlash from Japan for saying an apology from then Emperor Akihito would solve the longstanding issue over so-called comfort women.

"It only takes one word from the prime minister, who represents Japan -- I wish the emperor would do it since he will step down soon," he said in an interview with Bloomberg. "Isn't he the son of the main culprit of war crimes?" Moon said. He made the comments ahead of the April abdication of Emperor Akihito, the eldest son of wartime Emperor Hirohito. He offered apologies later for the comment.

In October, the head of Japan's upper house sent a letter to Moon asking him to retract the comments, according to people familiar with the matter.

When there was no reply from him, Japan's House of Councillors President Akiko Santo decided not to hold talks with him on the sidelines of a multilateral meeting in Tokyo last month.