Seven-Eleven Japan Co. said Tuesday it failed to pay a portion of overtime wages to at least 30,000 employees at its franchise stores for years due to a miscalculation in the convenience store chain's payroll system.

Japan's largest convenience store chain also said the miscalculation was discovered in a probe at one of its franchisees by the government's Labor Standards Inspection Office in 2001, but it has neglected to make the lacking payments or publicize the matter, the company said.

The amount of overtime wages that went unpaid due to an error in the algorithm used for wage calculation totals at least 490 million yen ($4.5 million), according to the company. 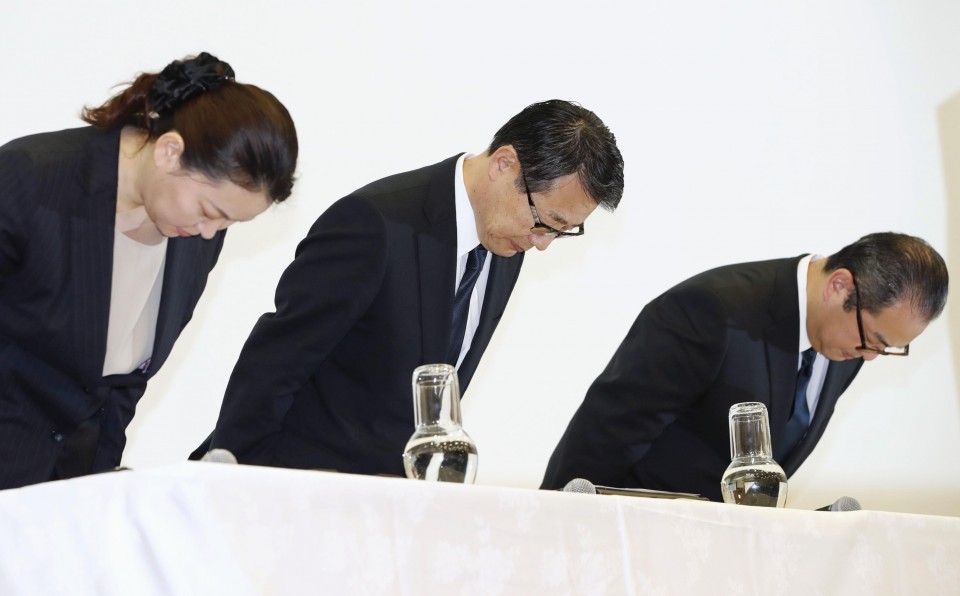 (Seven-Eleven Japan Co. President Fumihiko Nagamatsu (C) bows with other officials at the start of a press conference in Tokyo)

No. of Seven-Eleven stores in Japan falls for 1st time in 5 yrs

"I deeply apologize for the undisclosed cases in 2001 which should have been compensated and announced" as well as for those recently found to be underpaid by another inspection by the labor authority, Seven-Eleven Japan President Fumihiko Nagamatsu said at a press conference.

Nagamatsu, who was promoted to president in April, said the reason for failing to disclose the matter for 18 years is unknown despite the company's internal probes including hearings from employees.

"We should have corrected the mistake before receiving a notification from the inspectors. We will strengthen our employee education," Nagamatsu said.

Wages of part-time workers are paid by the franchise store owners, but wage calculations, the issuance of paychecks and bank transfers are carried out by Seven-Eleven's headquarters.

The equation in question had been used by the firm since October 2001, although records only exist from March 2012 onward. The error affected 8,129 stores nationwide and resulted in unpaid wages totaling as much as 2.8 million yen for one employee.

However, the full picture remains unclear as the issue dates back to the firm's founding in the 1970s, it said.

Seven-Eleven will try to reimburse all the unpaid wages and established a support window to deal with the issue, although some workers are no longer employed, many records are missing and some stores have already been closed.

The company said Nagamatsu will voluntarily cut his monthly remuneration by 10 percent for three months to take responsibility for the matter.

Seven-Eleven has recently come under fire for its treatment of franchise store owners, with issues ranging from not allowing store operation hours to be cut to unauthorized product orders placed by employees at the headquarters.