The top U.S. envoy for North Korea on Monday chided Pyongyang on the "hostile" tone of its recent statements, saying Washington would not be bound by a year-end deadline set by Pyongyang for progress in their denuclearization talks.

Stephen Biegun, who arrived in Seoul on Sunday, told reporters after meeting his South Korean counterpart Lee Do Hoon that the North Koreans "know how to reach us," signaling his willingness to make contact with the North at the inter-Korean border during his three-day visit.

Biegun stressed that the United States has a goal to fulfill what North Korean leader Kim Jong Un and U.S. President Donald Trump agreed to at their historic meeting in Singapore in June 2018, adding Washington has suggested many creative ways to proceed toward complete denuclearization of the Korean Peninsula.

Trump hints at using military against N. Korea if needed

"We and the North Koreans have in our hands the ability to choose a better path. But as I said a moment ago, the United States cannot do this alone," Biegun said.

If he succeeds in arranging a meeting with North Korean officials in the inter-Korean truce village of Panmunjeom, it would be the first contact since the two sides held working-level negotiations in Sweden in October. That meeting ended without an agreement.

North Korea has recently been stepping up its provocative rhetoric, warning that it will restart nuclear and intercontinental ballistic missile tests if its talks with Washington fail to achieve a breakthrough by the end of the year.

"On this point, let me be absolutely clear: The United States does not have a deadline," Biegun said. "We are fully aware of the strong potential for North Korea to conduct a major provocation in the days ahead." 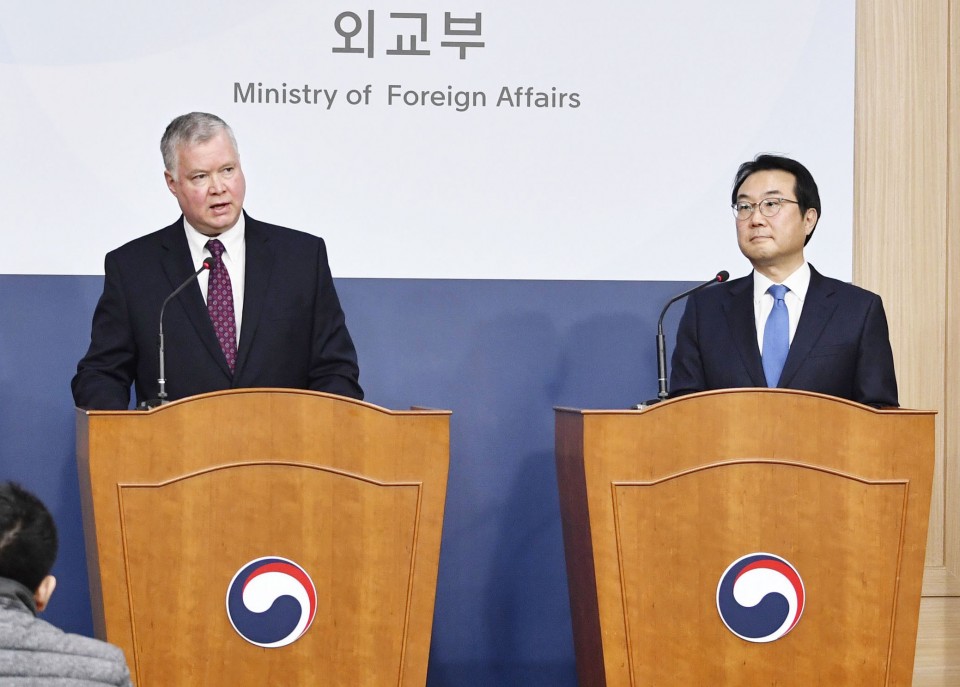 Lee, in the same briefing, quoted Biegun as saying that in-depth negotiations over what North Korea is interested in could be carried out once the talks resume.

Moon asked Biegun to keep pressing ahead with the peace process on the Korean Peninsula, according to a spokeswoman of the office.

Biegun responded that his desire to achieve the goal of denuclearization and the establishment of a peace regime through conversation and negotiations is unwavering, she said.

He is on a five-day trip to South Korea and Japan to affirm close coordination on North Korea with his counterparts in the two countries.