Andres Iniesta scored one goal and helped set up another as Vissel Kobe advanced to the Emperor's Cup final with a 3-1 win over Shimizu S-Pulse on Saturday.

The star-studded western Japan club will christen the new National Stadium in Tokyo on New Year's Day against Kashima Antlers, who beat second-division V-Varen Nagasaki 3-2 in the other semifinal. 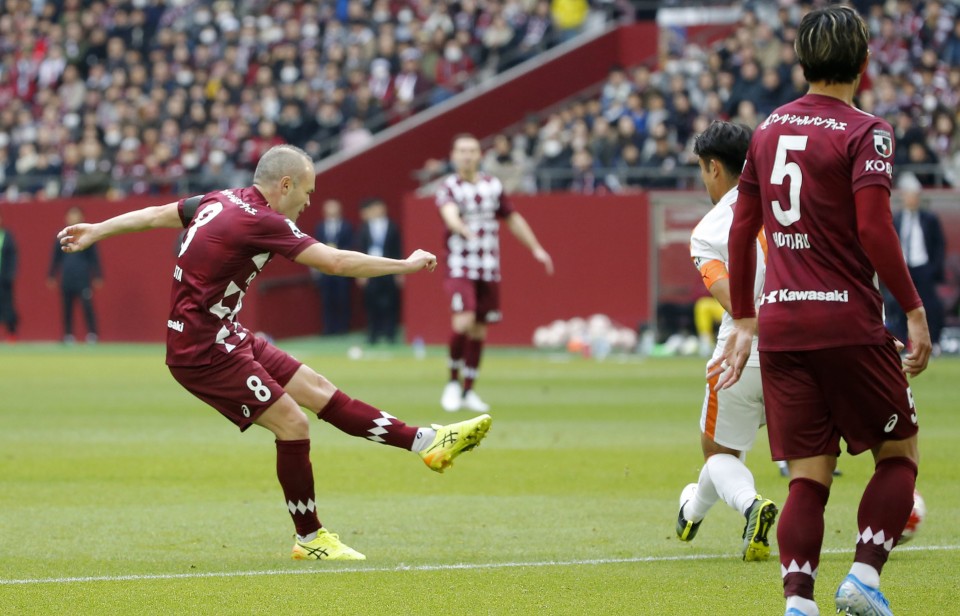 (Andres Iniesta scores a goal during the first half.)

With former Spain and Barcelona great Iniesta pulling the strings, Kobe saw off a spirited challenge from S-Pulse, who created several good chances on the counterattack.

Kobe had taken a 2-1 lead into halftime at Noevir Stadium following goals from Iniesta and Junya Tanaka. Junior Dutra struck back shortly before the break but Kyogo Furuhashi sealed the result in the 69th minute.

"I'm really happy to reach the final. It was a tough game, but we made it thanks to great work from the whole team," Iniesta said. "We really want to bring the trophy back here to Kobe."

Iniesta gave Thorsten Fink's squad the lead in the 13th minute, receiving the ball from Daigo Nishi near the edge of the box and driving a low, left-footed strike through a crowded area.

S-Pulse forward Douglas missed a golden opportunity to equalize from a counter 10 minutes later, heading over the bar from directly in front following a cross from Shota Kaneko.

Former Japan defender Gotoku Sakai was instrumental in Kobe's second, winning possession near the left touchline and threading a cross through the area for Tanaka to tap home at the back post.

Brazilian winger Dutra reduced the deficit in the 38th minute with a well-taken strike at the edge of the area. After intercepting a clearance, S-Pulse midfielder Ryo Takeuchi crossed to Dutra, who teed up the ball up with his right foot then volleyed home with his left.

Vissel struck their third almost immediately afterward, with Iniesta beating his man on the left, then sending a through-ball into the box for Furuhashi, who dribbled to his right before belting a low shot past S-Pulse keeper Yohei Nishibe. 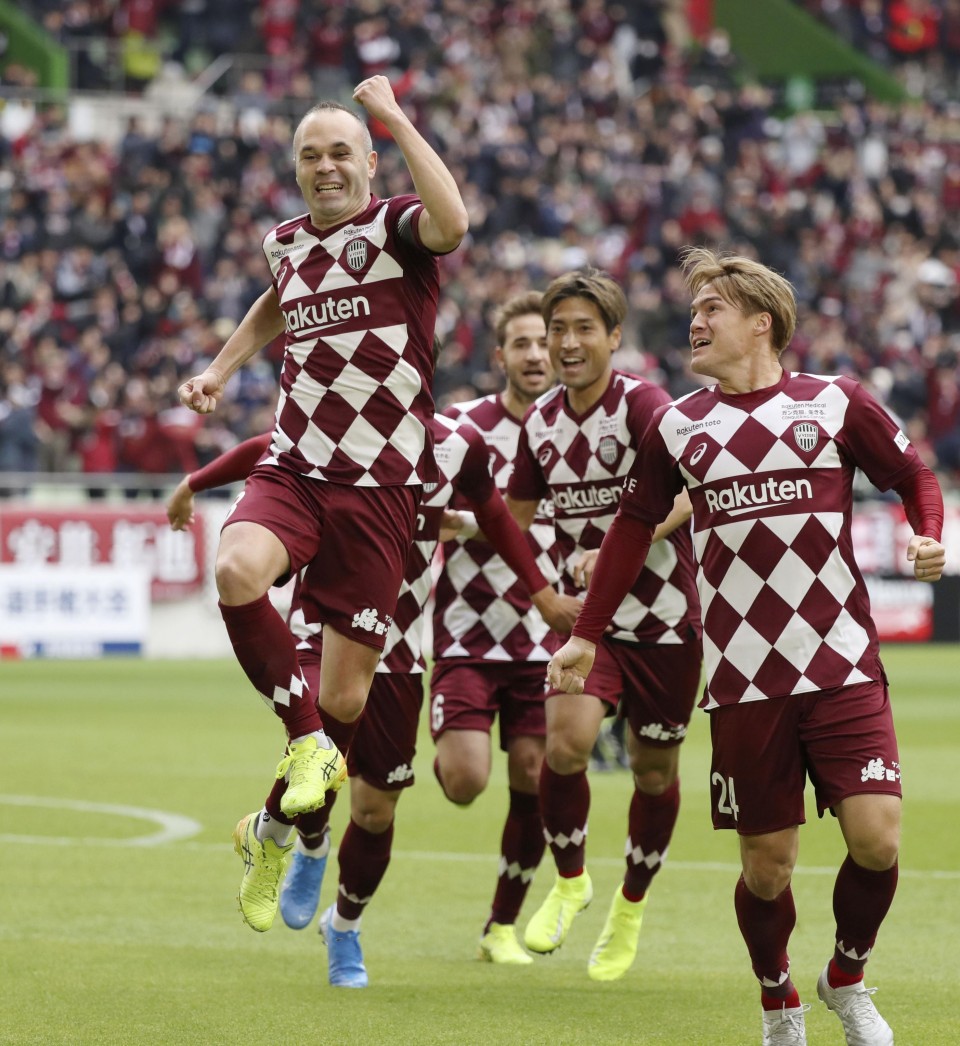 At Kashima Stadium, Go Oiwa's men appeared to secure victory when Bueno scored in the 73rd minute for a 3-1 lead over Nagasaki.

But the visitors hit back three minutes later through Takashi Sawada, setting up a nervous finish for five-time Emperor's Cup winners Kashima.

Serginho opened the scoring in the fourth minute for Antlers, who doubled the lead via an own goal in the 23rd minute. Shunya Yoneda struck in the 37th minute to take Nagasaki into the break trailing 2-1.

Should Vissel raise the Emperor's Cup for the first time on Jan. 1, they will also book their first ticket to the Asian Champions League.

Kashima, the 2018 ACL winners, are already guaranteed a place in the qualifying play-off for the continental tournament by virtue of finishing third in the J-League standings.

Kobe star David Villa is set to bring down the curtain on his illustrious career following the Emperor's Cup final. The forward, who holds the record for most international goals by a Spanish player, was not in the squad for the semifinal. 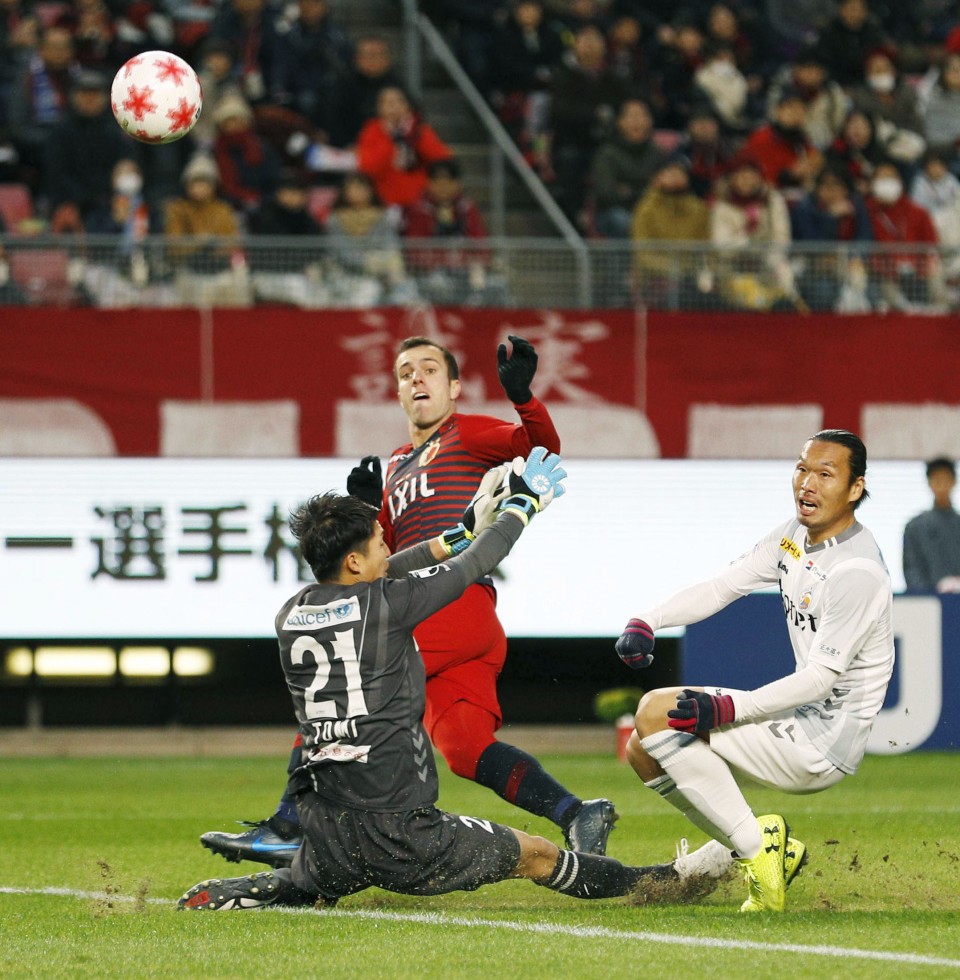 (Serginho opens the scoring in the fourth minute for Antlers.)