Austin the koala sits quietly atop his gunyah -- or shelter -- built from tree branches and bark in his enclosure at the Port Macquarie Koala Hospital.

Sue Ashton, president of the privately-run clinic, says the fact Austin has climbed to the top of his gunyah is a sign he's on the mend. But the furry marsupial, one of Australia's most iconic animals, holds onto his branch tentatively with still-sore paws, and his dull, singed fur reveals patches of burnt skin underneath.

Austin is one of 41 koalas the hospital -- roughly four hours northeast of Sydney -- has treated for injuries sustained in this year's bushfires that have been burning for weeks along Australia's east coast.

"It's been very traumatic. They've lost their homes, their population, they've been badly burnt, so they've been seriously traumatized," Ashton told Kyodo News.

The fires are some of the worst people have ever seen. In the state of New South Wales alone, the Rural Fire Service estimates the bushfires have destroyed 2.7 million hectares -- more than three times the land area of Hokkaido. Experts estimate more than 2,000 koalas have already died along the east coast.

Ashton estimates 85 percent of the Port Macquarie region's koalas have perished in the fires, with the area home to some of the east coast's largest and most genetically diverse populations.

Before the 2019 fire season, Ashton said koalas in the Port Macquarie region were labeled as "vulnerable," meaning they faced a high risk of extinction within the state in the medium-term future.

Following the fires, Ashton and her team thought koalas might be reclassified as "endangered." But having seen the full extent of the still-burning blazes, she now fears their numbers and genetic diversity are so low they will be classified as "functionally extinct."

"I don't know if we'll ever recover," she said. "The tragic thing is they breed very slowly. A female will have a joey once every 18 months to two years."

The fires in New South Wales, which have been labeled "unprecedented" by firefighters and scientists alike, have been fueled by one of the worst droughts the state has ever seen. Prolonged heat and low rainfall have meant fires have spread faster and burned hotter than many people, including Ashton, have ever seen. 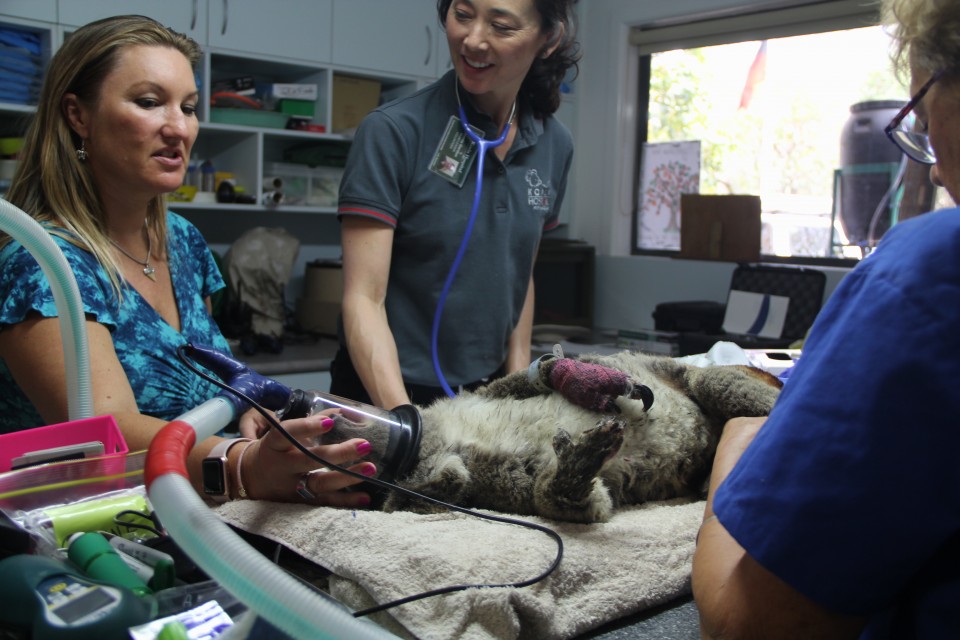 Koalas at the hospital, found on fire grounds, are generally being treated for burns on their paws and sometimes their faces. These burns are usually sustained as the koala tries to escape the flames by climbing down a still-burning tree trunk.

But Ashton says this year's fires have been so intense that many koalas have simply been "incinerated."

"It just burnt them alive, and they became ash," she said.

Of the koalas which have been taken to the hospital, almost all are expected to make a full recovery and be re-released into the wild.

Hospital staff records the GPS locations of where each animal was found so they can be returned to the same area, and in some cases, the very same tree.

However, with so much bushland destroyed by the fires, Ashton expects it will be a further six-to-eight months before the eucalyptus habitat has regenerated enough to provide sufficient food and shelter.

In the wake of the fires, Ashton says the koala hospital has been "inundated" with support from across Australia and overseas.

"We've had little kids bringing in snacks for the workers and their money box contents to help us run the hospital," she said. "It's been a bit overwhelming."

An online fundraising platform, established at the end of October, has raised over AU$2 million ($1.37 million), making it the largest crowdfunding campaign on the GoFundMe website.

The koala hospital depends almost entirely on donations from the public, and Ashton says the latest funds will be used to build and distribute water stations across the New South Wales bushland that can be used by koalas and other wildlife. Plans for a wild koala breeding program have also been able to be brought forward, thanks to the funding.

But ultimately, Ashton says, the best way people can help protect koalas from bushfires, as well as other threats including a strain of chlamydia and car strikes, is to preserve large sections of bushland.

"Putting aside tracts of land where they can live in healthy populations. There's no way around it, and that's a government initiative," she said, adding it was "frustrating" that the state government seems unwilling to work to preserve wildlife habitats proactively.

"They're just the most beautiful animals. They really don't hurt anybody or anything. We love them. It's very sad to see them so endangered."