Japanese, Chinese and South Korean leaders agreed Tuesday to strengthen trilateral coordination to achieve the denuclearization of North Korea, as Pyongyang has stepped up provocative rhetoric against the United States with their nuclear talks at a standstill.

The three countries "agreed to support talks between the United States and North Korea," Japanese Prime Minister Shinzo Abe said at a press conference after his meeting with his Chinese and South Korean counterparts.

China, the chair of this year's trilateral gathering, hopes issues on the Korean Peninsula will be resolved "through dialogue," Premier Li Keqiang said.

The leaders said in a joint statement released after their summit, "We reaffirm that maintaining peace and stability on the Korean Peninsula as well as in Northeast Asia is our common interest and responsibility." 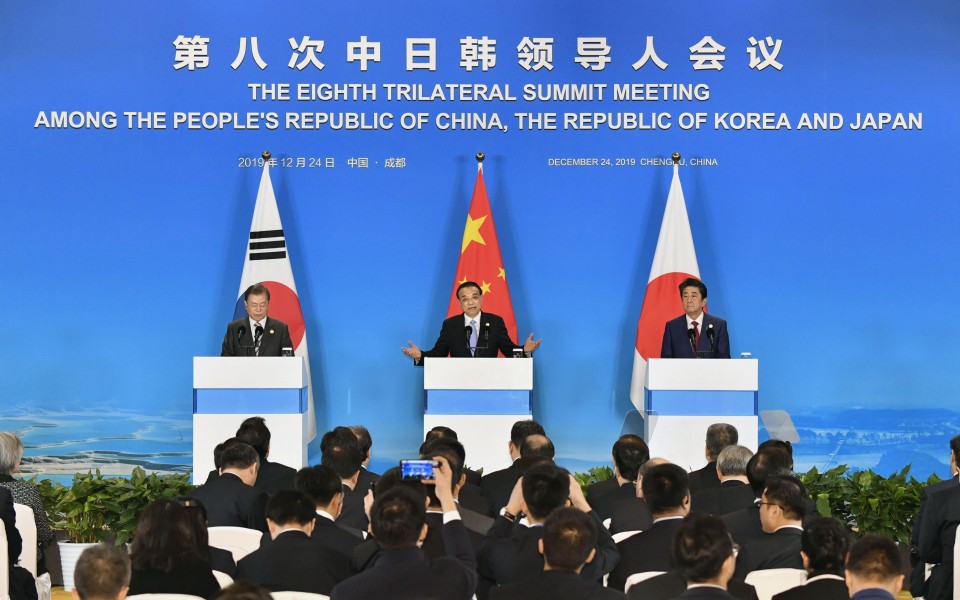 The trilateral summit is held annually on a rotating basis by the three nations, but it had occasionally been suspended due to a chill in Japan's relations with its two neighbors over historical and territorial disputes as well as political turmoil in South Korea.

Japan's ties with China have been improving markedly in recent years after issues related to wartime history and territorial claims had caused relations to become strained.

In contrast, the Japan-South Korea relationship has deteriorated to its lowest point in years against a backdrop of a spat over compensation for wartime labor that has also affected trade and security cooperation. 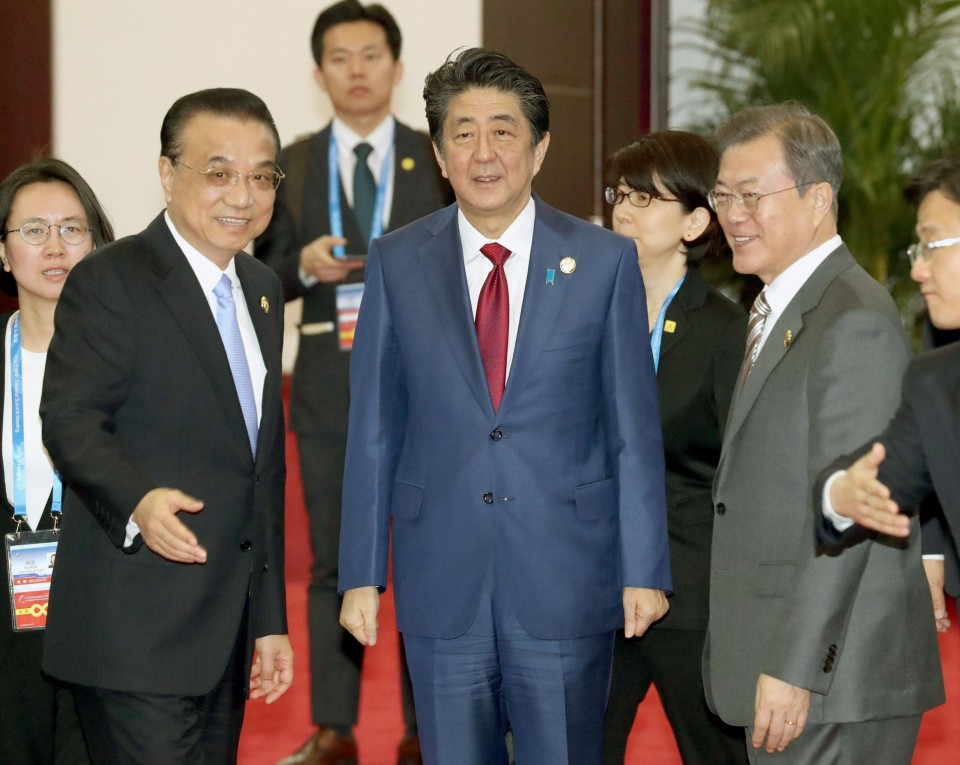 The North Korea issue was high on their agenda at the latest summit ahead of an approaching year-end deadline unilaterally set by Pyongyang for progress with the United States in stalled denuclearization talks.

Pyongyang has overseen a spate of launches of what appeared to be short-range ballistic missiles this year in defiance of U.N. Security Council resolutions, putting its neighbors on high alert.

Concerns have been growing that it may conduct an intercontinental ballistic missile test if negotiations with Washington fail to achieve a breakthrough by the end of the year.

The United States, which favors keeping international economic sanctions against Pyongyang in place, has been calling on North Korea to continue to abide by its commitments to denuclearize and refrain from testing long-range ballistic missiles.

In an attempt to prevent the situation on the divided peninsula from escalating, China -- known as North Korea's closest and most influential ally -- has expressed readiness to ease international economic sanctions against Pyongyang.

Earlier this month, China, along with Russia, submitted to the U.N. Security Council a draft resolution aimed at loosening sanctions against North Korea.

Abe, meanwhile, sought cooperation from the other leaders on resolving the long-standing issue of Japanese nationals abducted by Pyongyang in the 1970s and 1980s, according to Japanese officials. The issue is a top priority for Abe.

On the same day, North Korea lambasted Japan for creating "hostility," singling out Japanese Defense Minister Taro Kono, who is in charge of the country's security affairs.

"The issue which Japan has become clamorous about is the test-fire of multiple rocket launcher and even a mere child knows that it poses no threat to the island nation," the news agency said. On Monday, however, South Korea's Moon said he was keenly aware of increasing strains on the Korean Peninsula during a meeting with Chinese President Xi Jinping.

"The recent situations, in which dialogue between North Korea and the United States has been suspended and tensions on the Korean Peninsula are being heightened, are not beneficial to both of our countries and North Korea," Moon told Xi, according to South Korea's Yonhap News Agency.

After the Xi-Moon summit, a source at the South Korean presidential office said that Seoul has been closely watching the outlook for the draft resolution submitted by China and Russia.

The tripartite framework is not limited to security and economic issues. The Asian neighbors have been seeking to deepen cooperation in a range of areas that include tourism, healthcare and disaster prevention.

The latest round of the leaders' meeting, first held in 1999, marks the 20th anniversary of establishing the three-way cooperation framework.