Hong Kong leader Carrie Lam said Tuesday that the U.S. enactment of a law in support of pro-democracy protests in the Chinese territory could undermine business confidence and stability in Hong Kong.

Lam was referring to a provision in the new law that directs the U.S. government to review annually whether Hong Kong retains enough autonomy from China to maintain its special trading status with the United States.

"Whether the act would hamper development in certain sectors...could not be assessed at this time, but (lack of) confidence and unstable environment do not benefit any economy," Lam told a weekly news briefing.

The Beijing-backed chief executive also denied that Hong Kong is losing its freedom and criticized the legislation as being based on such assumptions.

"Hong Kong's human rights and freedom are protected under the Basic Law," Lam said, referring to the territory's mini-constitution. "We have freedom of the press, freedom of assembly, freedom of religion and in many other areas. It is most regretful that a foreign legislature and government interfered in Hong Kong affairs with their own laws." 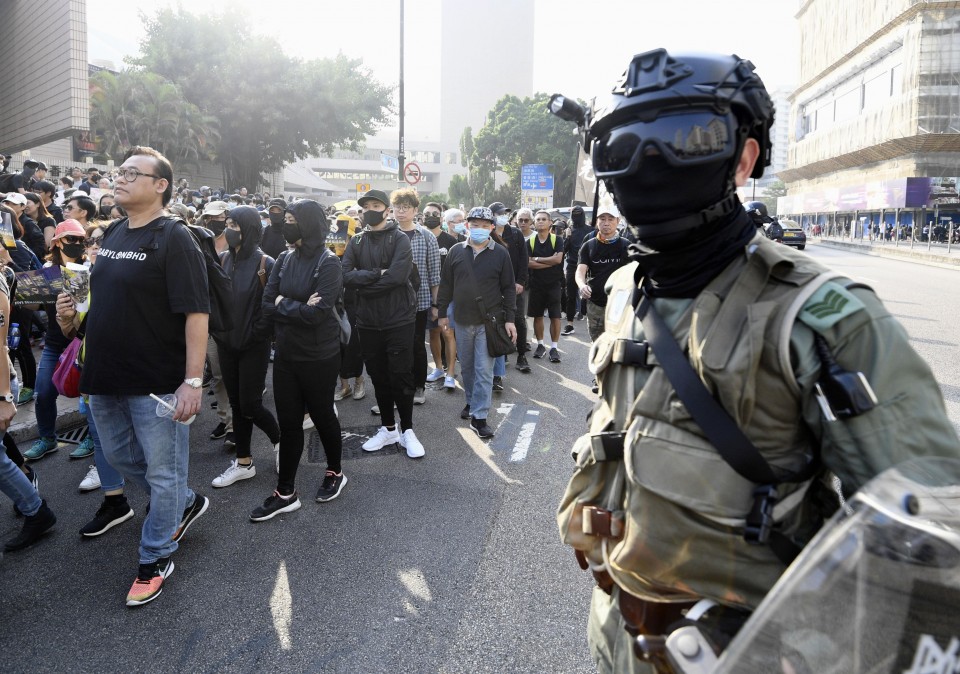 She said Hong Kong will accept decisions taken by the central government in Beijing in retaliation for the U.S. legislation, including a decision to bar U.S. military aircraft and ships from visiting the semi-autonomous territory.

The Chinese government also said Monday that it has imposed sanctions on a handful of U.S. nongovernmental organizations accused of fanning the protests that have lasted for months. It named such groups as Human Rights Watch and the National Endowment for Democracy.

Mass protests began in Hong Kong in June over a contentious bill that sought to allow extraditions to mainland China. Even though the bill was withdrawn amid strong popular opposition, the protests have expanded to include calls for police accountability and greater democracy.

Lam on Tuesday reiterated the Hong Kong government's intention not to accommodate any more of the protesters' demands, rejecting the idea of an independent probe into alleged police brutality. She has instead proposed forming a review committee to look into the root cause of the social unrest.

The chief executive also said a new round of relief measures will be taken to help slow the rising jobless rate amid the slumping economy. Since August, the government has provided HK$20 billion (US$2.55 billion) worth of relief.

Later in the day, hundreds of protesters gathered in the business district of Central on Hong Kong island and in the industrial zones of Cheung Sha Wan and Kwai Chung in Kowloon, calling on the government to listen to their demands and disband the police force.

In the United States on Monday, U.S. Secretary of State Mike Pompeo said that Washington will ensure that Beijing keeps its promises to the Hong Kong people under the Sino-British Joint Declaration.

"You have a people that is desirous of having the Chinese Communist Party live up to the promise that it made back in 1997. It's a ratified treaty. Our efforts are to make sure that those weren't empty promises that were made to the people of Hong Kong," Pompeo told an audience in Kentucky.

"The United States stands firmly in support of asking the Chinese leadership to honor that commitment, asking everyone involved in the political process there to do so without violence, and to find a resolution to this that honors the 'one country, two systems' policy that the Chinese leadership signed up for," he added.