Police referred a 17-year-old high school student and two men to prosecutors on Tuesday over their alleged involvement in the online trading of uranium in violation of Japanese law regulating nuclear materials.

The male teenager from Tokyo and a 61-year-old pharmacist in Ibaraki Prefecture are suspected of purchasing the chemicals from a 24-year-old temporary worker in Nagano Prefecture on an online auction site between October 2017 and January 2018, the Metropolitan Police Department said. 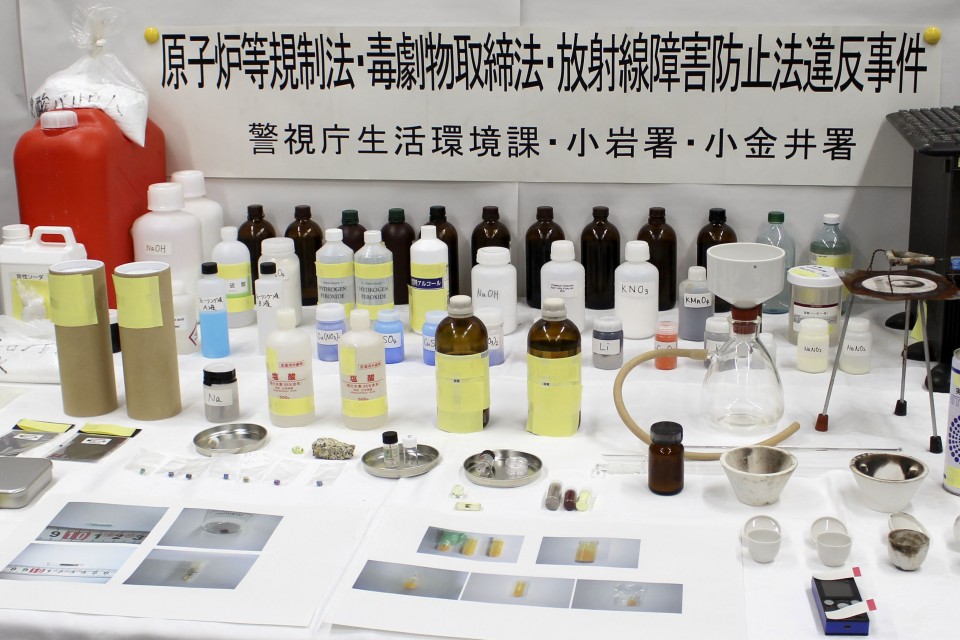 (Substances confiscated by the police)

The purchasers paid between 5,000 yen ($46) and 30,000 yen for uranium substances that emitted minute amounts of radiation, the police said.

According to investigative sources, the temporary worker sold small amounts of depleted uranium and natural uranium in glass tubes on a Yahoo online auction site, and has told the police he purchased the uranium through an overseas website.

Japan's laws on nuclear materials ban people other than approved businesses and organizations from trading nuclear fuel materials such as high-grade uranium.

All three have admitted to the charges and said they were motivated by an interest in chemistry and had no intention to use the materials for any unlawful purposes, the sources said.

The temporary worker and the teen were also referred to prosecutors over a separate case in which they allegedly traded americium, a radioactive substance.

The latest allegations followed steps taken by the police in April to refer the student to prosecutors for allegedly creating an explosive powder.

The police launched an investigation into the online uranium trading after they were alerted by an official of the Secretariat of the Nuclear Regulation Authority in early 2018, who found a substance under the name of "uranium 99.9%" being offered on an online auction site in November 2017.