Japan received a satirical "Fossil of the Day" award Tuesday from an international environmental group after the country's industry minister voiced a plan to continue using coal-fired power, one of the causes of global warming.

The nongovernmental organization, Climate Action Network, announced the recipients of the award -- Japan, Australia, and Brazil -- at the venue of the U.N. climate change conference, COP25, in Madrid. 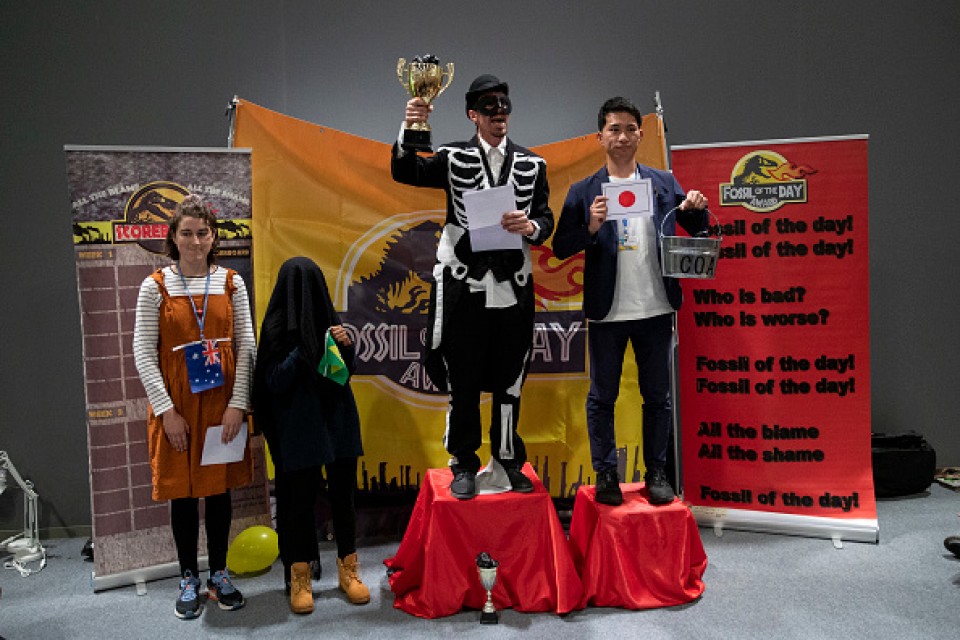 (Australia, Brasil and Japan win the Fossil of the Day Award during the second day of the UNFCCC COP25 climate conference on Dec. 2, 2019 in Madrid.)[Getty/Kyodo]

Japan's Economy, Trade and Industry Minister Hiroshi Kajiyama "snubbed the international community and the Paris Agreement," when the world is shifting toward coal-free power, the NGO network said in a statement.

"Instead of showing a commitment to multilateralism and the climate, minister Kajiyama showed commitment to destroying the planet and putting people in danger," it said.

On Tuesday, Kajiyama told a press conference in Tokyo, "As options (for an energy mix,) we would like to keep coal-fired power plants and power plants using fossil fuels."

The United Nations urged Japan in a report last month to halt the construction of new coal-fired plants and gradually abandon existing ones amid the global trend of non-coal power.

Coal-fired power plants were singled out as the largest contributor to the growth in emissions observed in 2018, according to the International Energy Agency.

Japan's reliance on fossil fuels for power generation has increased as most of its nuclear power plants remain idle after the 2011 nuclear plant accident in Fukushima Prefecture that was triggered by a massive earthquake and tsunami.

Kajiyama also said at the press conference the government will make an effort to increase renewable energy and reduce carbon dioxide emissions as it propels the development of technology.

The fossil award is presented almost daily during the climate conference and Tuesday was the first day it was awarded.

Brazil and Australia received the award for their handling of large-scale rainforest fires and bushfires.