It is the eighth straight year the world's third-largest economy has compiled a record initial general account budget, also reflecting a rise in defense outlays as Japan is aiming to enhance defense capabilities in new realms such as outer space and cyberspace.

The spending plan for the year starting next April topped 100 trillion yen for the second consecutive year on ballooning medical, public pension and other social security costs. The government will widen the scope of free education.

To mitigate the negative impact of the consumption tax hike in October, the first in five years, and safeguard growth, the government will set aside 1.78 trillion yen for stimulus steps such as shopping reward point programs and infrastructure building. 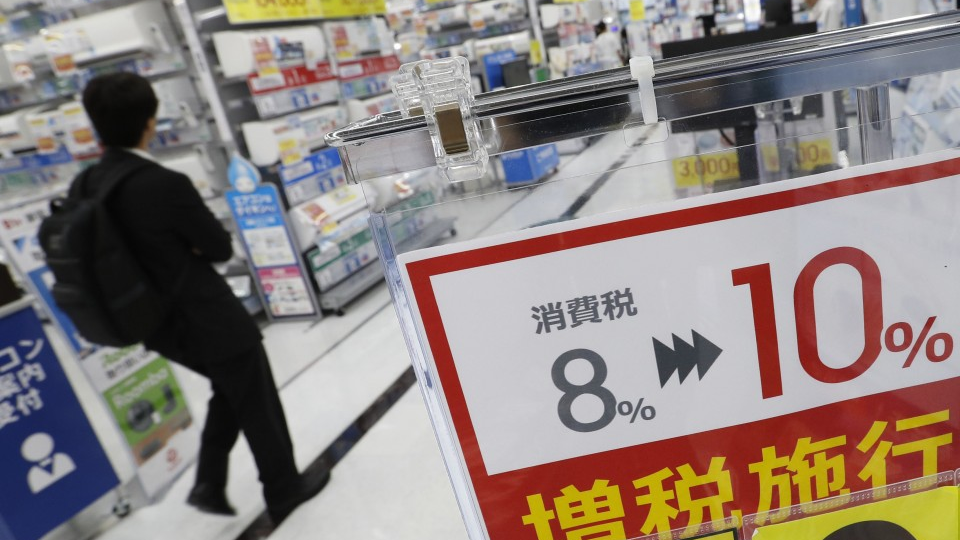 The draft budget, which will be submitted to the Diet in January, consists of 79.31 trillion yen for policy spending, including record-high defense expenditures, and 23.35 trillion yen in debt-servicing costs.

Based on the government assumption that Japan's economy will grow a nominal 2.1 percent in fiscal 2020 and other factors, tax revenue is estimated at a record 63.51 trillion yen that includes proceeds from the higher consumption tax, up 1.02 trillion yen from the initial budget for fiscal 2019.

The consumption tax rate was raised to 10 percent from 8 percent on Oct. 1 after being delayed twice.

To improve its fiscal health, the worst among major developed countries with public debt more than double the size of gross domestic product, Japan will cut new bond issuance for the 10th straight year. The government plans to issue debts worth 32.56 trillion yen, down 104.3 billion yen from a year earlier.

Among the policy spending, 35.86 trillion yen will cover social security, accounting for more than a third of the total budget and up 1.73 trillion yen from the previous year.

As part of the government's efforts to realize a social security system that benefits all generations, 488.2 billion yen will be allocated for free higher education, including grants and scholarships for college and training school students from low-income households.

The initial budget also includes 247.8 billion yen to launch a shopping reward point program for purchases made by holders of "My Number" national identification cards, in an attempt to spur consumer spending after the consumption tax hike.

The stimulus step comes on top of 270.3 billion yen for similar incentive programs already in place for purchases through cashless payments.

Spending on public works projects comes to 6.86 trillion yen, including ones to prevent and mitigate natural disasters, while 561.0 billion yen is earmarked for official development assistance to other countries.

Along with the initial fiscal 2020 budget, the government will also seek Diet approval for an 4.47 trillion yen extra budget for the current fiscal year, focusing on financing reconstruction of areas damaged by a recent series of powerful typhoons and other natural disasters.

-- sets aside 1.78 trillion yen for stimulus steps to mitigate the negative impact on the economy from the consumption tax hike in October.

-- estimates tax revenue will increase to a record 63.51 trillion yen.