About 100 protesters remain holed up inside a university under police siege on Tuesday, Hong Kong leader Carrie Lam said, while calling on them to swiftly surrender in a bid to bring the days-long standoff with police to an end.

The territory's chief executive told a news conference that about 600 protesters have left the Hong Kong Polytechnic University campus in the Kowloon area, including about 200 who are under 18 years old.

Lam said the police arrested about 400 demonstrators who had occupied the university. 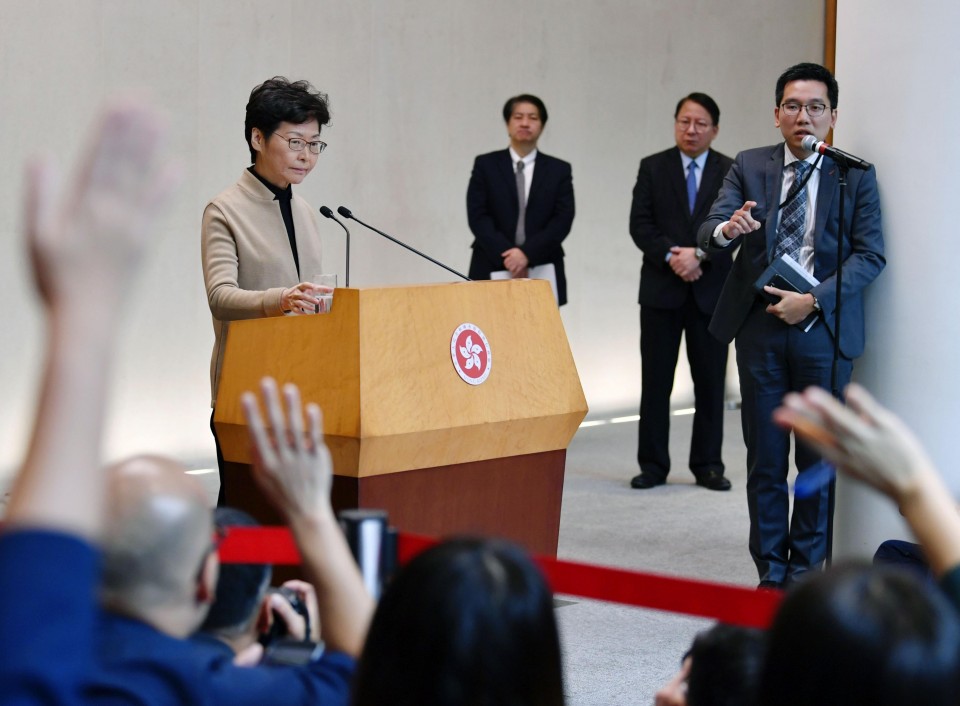 "I cannot give an absolute guarantee because the situation is changing. If we were suddenly seeing some very major, life threatening incidents on the campus, then the police have to take the necessary action to prevent any tragedies from happening," she said.

Lam said although police did not immediately arrest the underage protesters, investigations will continue and police may lay charges against some of them if there is sufficient evidence.

Including the 600 who surrendered themselves, police said about 1,100 people, most of whom are not university students, have been arrested or their identities recorded since Monday in the vicinity of the campus.

About two dozen protesters who tried to escape late Monday in cars and motorcycles awaiting them on an elevated motorway adjacent to the campus were later captured by police.

"Even you manage to escape, you can't be free forever," police spokesman Kong Wing-cheung said in a regular news briefing, while urging the remaining protesters to surrender.

A handful of other protesters who sought to sneak out through the underground sewage system gave up and reemerged on the ground, local media reported.

"It was unbearable," one of the failed escapees told reporters. "But we have no one to turn to. We don't know how to ask for help from outside, and if no one from outside could help, what can we do?"

The standoff between anti-government protesters and the police continued as the Hong Kong government warned the unrest stands to jeopardize district council elections scheduled for Sunday.

Lam said whether there are right conditions for the election, namely no violence or intimidation, no obstruction of major thoroughfare and no more damaging of public transport facilities, will be assessed on a daily basis.

Protesters gathered for a lunchtime rally in the business district of Central in response to calls for showing support to those remaining in the campus. Police soon arrived to control the crowd.

Thousands of people also took to the streets in areas close to the university late Monday to show support, clashing with police who used tear gas and other weapons to help block access to the campus.

The mayhem lasted for hours into early Tuesday, while politicians and secondary school principals helped broker a deal with police to let underage protesters leave the campus without facing immediate arrest.

Whether the laws in Hong Kong comply with the region's Basic Law is "a judgment and decision to be solely made by the Standing Committee of the National People's Congress," Zang Tiewei, spokesman for the committee's Legislative Affairs Commission said. "No other authority has the right to make judgment and decision."

The ruling "seriously" weakens the administrative power of the chief executive and the government and "does not comply with Hong Kong Basic Law," he said.

Yang Guang, spokesman for the Hong Kong and Macau office, said the ruling is "a blatant challenge" to the authority of the legislature's committee and the chief executive.

Lam, who along with the Executive Council invoked emergency power to enact the law, declined to comment on the ruling, only saying she respects the concerns expressed by China.

The protests, sparked by a now-withdrawn bill that sought to allow extraditions to mainland China, have been ongoing since June, presenting the government with its biggest challenge yet since the territory's handover to Chinese rule in 1997.

On Monday, U.S. Secretary of State Mike Pompeo said the United States "is gravely concerned by the deepening political unrest and violence in Hong Kong" and called for "restraint" from all parties.

While emphasizing that "violence by any side is unacceptable," Pompeo said the Hong Kong government bears primary responsibility for bringing calm to the territory.

But he also said, "The Chinese Communist Party must honor its promises to the Hong Kong people, who only want the freedoms and liberties that they have been promised in the Sino-British Joint Declaration."