South Korean President Moon Jae In told visiting U.S. Defense Secretary Mark Esper Friday it is difficult for Seoul to share military intelligence with Japan, while vowing to make continued efforts toward security cooperation among the three countries, according to the presidential office.

In their meeting at the office, Moon explained his government's decision in August to not renew a military intelligence-sharing pact with Japan, said presidential spokeswoman Ko Min Jung. 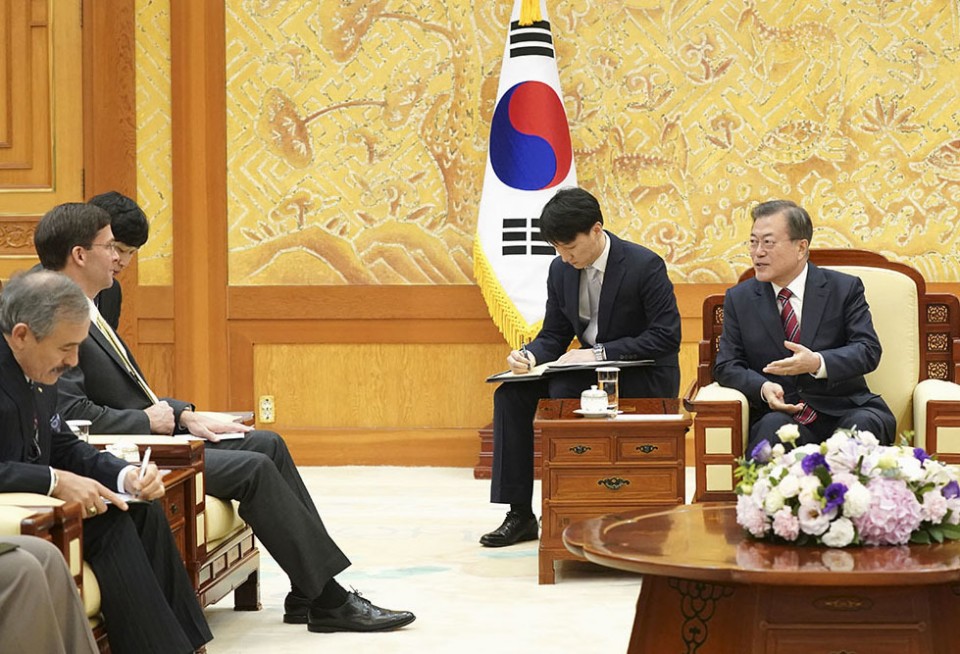 The General Security of Military Information Agreement, or GSOMIA, expires at midnight on Nov. 22.

"President Moon explained our stance regarding GSOMIA that it is difficult to exchange military information with Japan, which has imposed export curbs on South Korea for security reasons," Ko said.

She said that Esper, in response, said that he would ask Japan to make efforts to settle the issue in an amicable way.

At a press conference earlier in the day with Defense Minister Jeong Kyeong Doo, Esper called on South Korea to renew the deal, saying its termination would only benefit North Korea and China.

The two defense chiefs indicated that they agreed on the importance of the agreement from the standpoint of national security. 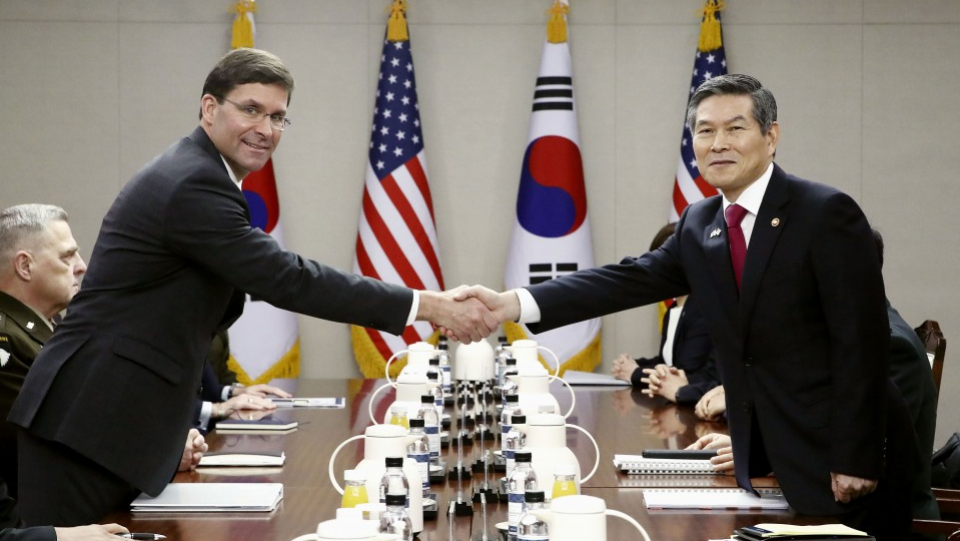 "GSOMIA is an important tool by which South Korea, the U.S. and Japan share effective information, particularly in times of war. Expiration of GSOMIA will have an impact on our effectiveness, so we urge all sides to sit down and work through their differences," he said.

The Pentagon chief added that the prospect of North Korea and China benefiting from the expiration is alone enough for Seoul and Tokyo to sit down and restore their ties.

Jeong, in his remarks, reiterated South Korea's position that the decision to terminate the pact could be reconsidered if Japan reversed its tightening of export controls on South Korea that it implemented in July.

"I hope we have good discussions with Japan in a positive direction while we still have time, so we can keep GSOMIA," Jeong added.

GSOMIA has allowed Japan and South Korea -- which have no military alliance between them but are both allies of the United States -- to directly share sensitive intelligence, such as information about North Korea's military activities related to its nuclear and missile programs.

South Korea, which decided in August to let the pact lapse without renewal over a trade feud with Japan, has said the GSOMIA issue should be considered separately from South Korea-U.S. relations.

Also on the agenda at Friday's annual Security Consultative Meeting between the two defense chiefs were continued negotiations over cost-sharing for U.S. military bases hosted in South Korea.

Esper, in the same press conference, said South Korea should pay more to support U.S. forces in the nation because it is a wealthy country, and therefore is able to shoulder a greater financial burden.

Jeong told reporters that the two confirmed that a cost-sharing agreement between the two countries should be fair and mutually agreeable.

Speaking to reporters en route to Asia on Wednesday, Esper said his message, with regard to the intelligence-sharing pact between South Korea and Japan, "will be very clear."

"That is, the GSOMI Agreement must be maintained. And it's critical to sharing intelligence, particularly in a timely manner with regard to any type of North Korean actions," he said.

"And I will urge my fellow ministers to get beyond these issues, and let's focus on how we partner as allies to deter North Korean bad behavior. And then, in the long term, deal with the Chinese," he added.

Separately, U.S. Forces Korea commander Gen. Robert Abrams told a press conference this week that "the fundamental principle of the information-sharing agreement was a clear message to the region that the Republic of Korea and Japan put aside perhaps historical differences."

"Together, we are much stronger for providing for a stable and secure Northeast Asia," he added.

Esper is scheduled to travel to Thailand to attend a regional defense ministers' meeting involving the Association of Southeast Asian Nations. He will travel to the Philippines and Vietnam as well.