The leader of the banned opposition Cambodia National Rescue Party was released Sunday from yearlong house arrest after being charged with treason, but is still prohibited from engaging in political activities, a court said.

Investigations into Kem Sokha's case are now concluded and he has been temporarily discharged before his upcoming trial but cannot leave the country and is required to cooperate with authorities at any time, according to a statement from the Phnom Penh Municipal Court.

The statement did not say when Kem Sokha will be tried but sources with knowledge of the situation have suggested by mid-December at the latest. 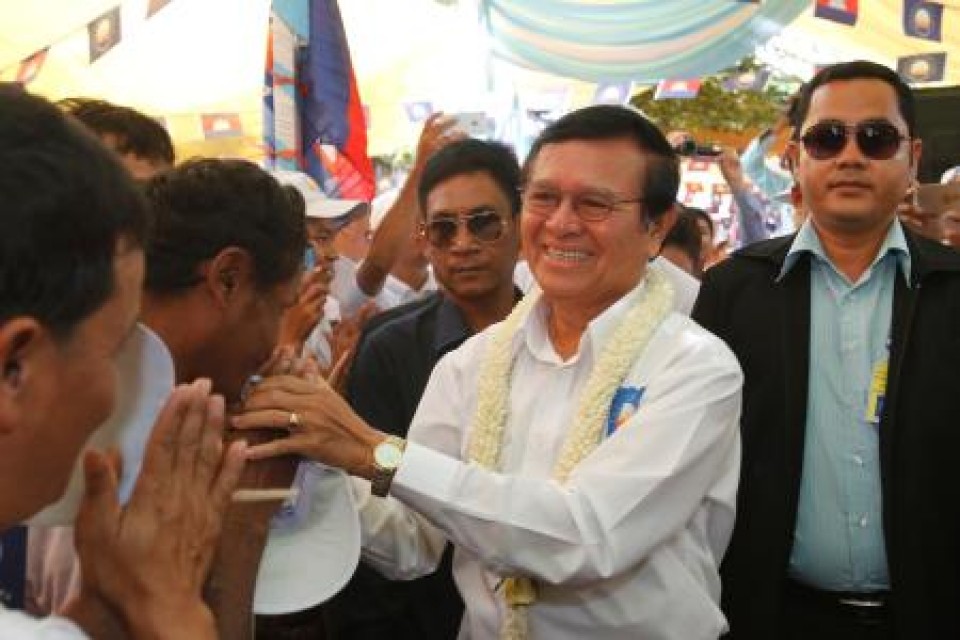 Kem Sokha, 66, was charged with treason in September 2017 for allegedly conspiring with a foreign power to topple the government. He was immediately sent to a prison near the Vietnamese border before being transferred back to Phnom Penh a year later and put under house arrest.

The charges are widely seen as politically motivated and part of a wide-ranging effort by the government to crack down on any meaningful opposition.

In a post on Facebook following his release, Kem Sokha expressed disappointment with the investigating judge's rejection of a request from his lawyers to drop the charges against him.

"As a law-abiding figure who has been detained for over two years despite being innocent of any wrongdoing, I still insist on the charges against me being dropped," he wrote. "I hope that today's decision is just the first step (toward clearing my name)."

He added that he is "no different from other Cambodian citizens who have lost their political freedom and need a solution and real justice."

Pheng Heng, one of his lawyers, told the media that his client seeks medical treatment abroad.

The lawyer said that Kem Sokha needs time to review the court's conditional restrictions before deciding when to leave home and speak to the media.

The CRNP, which was forcibly dissolved in 2017, and international human rights groups had been calling on the government to release Kem Sokha, a co-founder of the party, or send him to trial.

The CNRP, which was founded in 2012 following a merger between the Sam Rainsy Party and the Human Rights Party, achieved a historic result in the 2013 national election, narrowly losing out to the ruling Cambodian People's Party of Prime Minister Hun Sen.

Prior to the Supreme Court-ordered dissolution in November 2017, it was the sole opposition party in the National Assembly, with 55 seats compared with 68 held by Hun Sen's CPP.

Its removal ahead of the July 2018 election enabled the ruling party to win all 125 seats and Hun Sen to extend his 33-year rule for another five years.

A total of 118 of the opposition party's lawmakers and other senior members were also banned from politics for five years.

Kem Sokha's release comes a day after Sam Rainsy, the acting president of the party who is wanted by the Cambodian authorities and currently living in exile in France, arrived in Malaysia from Europe.

Sam Rainsy, 70, who had pledged to return to his native country and join the Cambodian people on Saturday's national independence day, was prevented from boarding a Thai Airways flight from Paris to Bangkok on Thursday on the Thai prime minister's orders.

He told waiting reporters at Kuala Lumpur International Airport that he will be in Malaysia for "a couple of days."

Sam Rainsy faces more than 10 lawsuits filed against him by members of the CPP. Cambodian authorities have vowed to arrest him together with eight of his senior colleagues if they return to the country.

In September, he appealed to the Cambodian military to support the people in overthrowing Hun Sen, saying, "Toppling the illegal Hun Sen regime is a legal and legitimate act because Hun Sen is a usurper who has stolen power from the people through a fake election in 2018."

A Cambodian court subsequently charged Sam Rainsy and the eight other party figures with plotting a coup.

Hun Sen, 67, dubbed as Cambodia's strongman leader, has got the better of all his political opponents including the late King Norodom Sihanouk, his son Prince Norodom Ranariddh and the Khmer Rouge, with Sam Rainsy remaining his major challenger.