Hong Kong police fired tear gas and water cannons on Sunday in a bid to disperse anti-government protesters who have been blockading roads for days outside a university.

The black-clad protesters, who have completely blocked off traffic at a major harbor crossing tunnel since Wednesday as part of a territory-wide effort to disrupt traffic, have barricaded themselves in and around Polytechnic University in Kowloon.

The university is located near the entrance to the Cross Harbor Tunnel to Hong Kong Island.

In the morning, the protesters successfully fended off a group of government supporters who managed to clear some of the barricades. The protesters later returned the blockage to its earlier condition.

The standoff between police and protesters was temporarily broken up with police deploying water cannon trucks and armored vehicles that charged through the roadblocks and at the protesters. 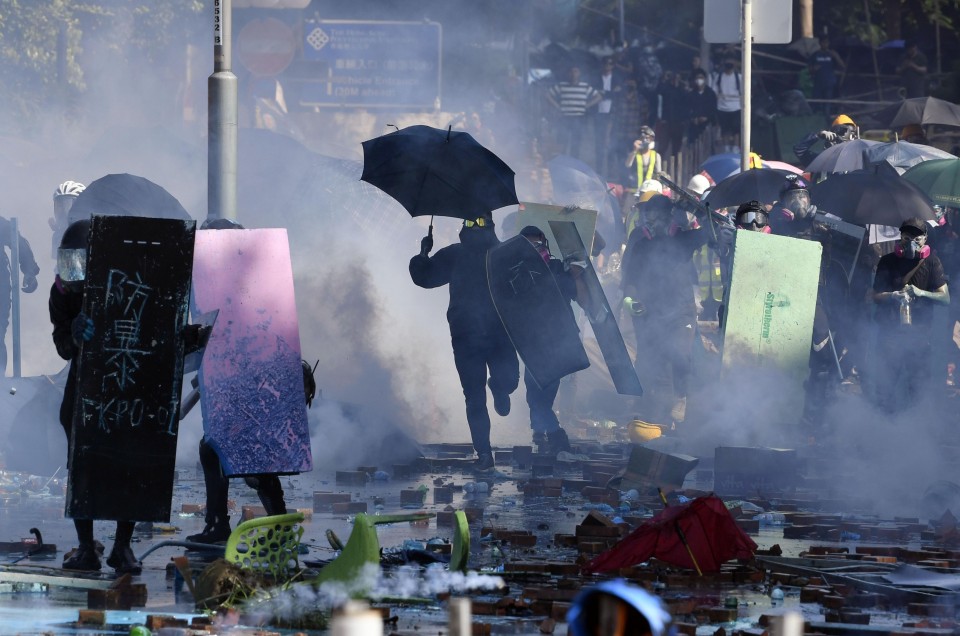 Blue-dyed water was also sprayed at protesters in the street and on an elevated platform of the university campus where they lined up with umbrellas and sought refuge.

The police warned of using live ammunition after an officer was reportedly shot in the leg with an arrow.

Chinese soldiers stationed in the Chatham Road camp nearby were seen armed and ready behind a metal gate overlooking the situation, according to local media.

On Saturday, Chinese military personnel in shorts and T-shirts left their barracks to help remove bricks and other debris placed by protesters on a road outside Baptist University in Kowloon.

Most universities, including a few of those whose campuses turned into warzones, have cut short the current semester or suspended classes. The government said Sunday that the class suspension order will extend through Monday.

The protests sparked by a now-withdrawn bill that sought to allow extraditions to mainland China have been ongoing since June, presenting the Hong Kong government with its biggest challenge yet since the former British colony's return to Chinese rule in 1997.

The protesters' demands have widened to include a probe into alleged police brutality, pardons for arrested protesters and democratic reform.