A lawmaker with severe physical disabilities attended his first parliamentary interpellation Thursday since being elected in July and became the first lawmaker in Japan ever to use an electronically-generated voice during a Diet session.

In the session of the education, culture and science committee, Yasuhiko Funago, who has amyotrophic lateral sclerosis, a condition also known as Lou Gehrig's disease, greeted the committee using a speech synthesizer. He also asked questions through a proxy speaker. 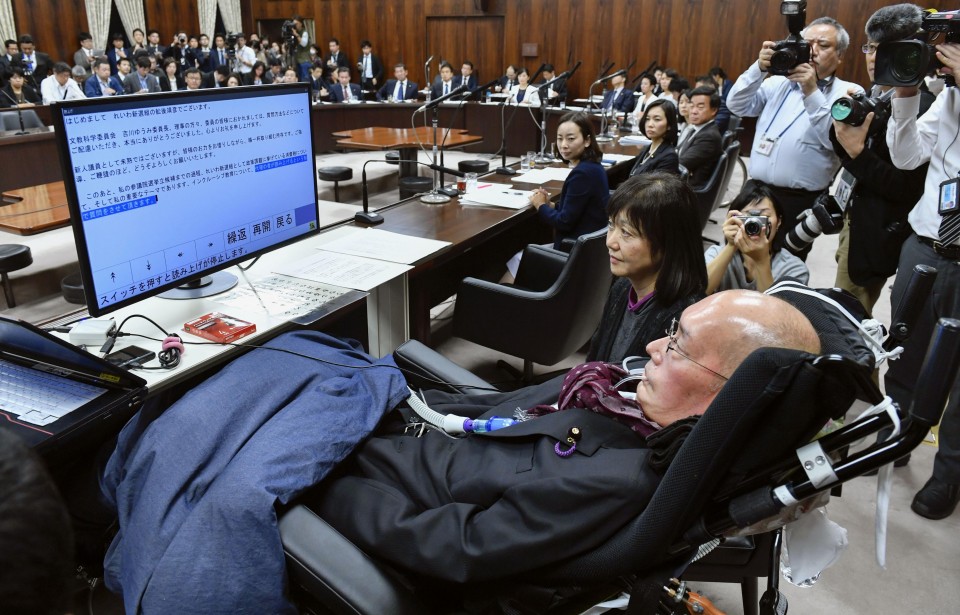 "As a newcomer, I am still inexperienced, but with everyone's assistance, I will do my best to tackle (issues)," he said at the beginning of the session.

An aide then posed questions on his behalf and expressed his desire to see improvements in the learning environment for disabled children.

"Lack of knowledge about the reality of disabled people leads to prejudice and discrimination," Funago said, as he proposed an "inclusive education" system where children with and without disabilities can study together.

"(Having children) act together from a young age will enable them to deepen their understanding (of disabled people). I will work to make Mr. Funago's idea a reality," said education minister Koichi Hagiuda in response.

Funago also requested that private-sector English proficiency tests, which were originally planned to be introduced as part of Japan's standardized university entrance exams next April but was postponed, be revised to accommodate disabled students.

Additionally, he called for consumption tax breaks for families with children and questioned the stance of the government.

Sitting in a wheelchair, Funago participated in the interpellation session, accompanied by his secretary and caregiver. He brought along a computer equipped with a speech synthesizer and a monitor to view documents.

The committee chairman paused proceedings each time Funago had to compose a question for his aide to vocalize by using his eyes to scan a transparent character board, to ensure it was not included in his allocated question time.

Speaking to reporters following the session, Funago apologized for the inconvenience caused to the committee by going over his allotted time and vowed to shorten his question session next time.

Funago won his first seat in the July 21 election as a member of Reiwa Shinsengumi, an anti-establishment political group founded in April by actor-turned-politician Taro Yamamoto.

Another member of the party with severe disabilities, Eiko Kimura, attended her first parliamentary interpellation Tuesday with the committee of land and transport.

Kimura, who has cerebral palsy, raised questions on issues such as the barrier-free accessibility of evacuation shelters during natural disasters. She forwent the use of a proxy speaker in the session and instead used her own words by having her aide display questions written on a piece of paper.