Japan and India agreed Saturday to conduct their first-ever joint fighter aircraft exercise in Japan as part of efforts to promote bilateral security cooperation in the face of China's military buildup and regional assertiveness.

In the inaugural "two-plus-two" security talks, the foreign and defense ministers of the two Asian democracies also welcomed the significant progress in negotiations for an acquisition and cross-servicing agreement, or ACSA, and called for an early conclusion, according to a joint statement issued after the talks in New Delhi.

The two governments are planning to sign the ACSA, which would allow the two sides to share defense capabilities and supplies including fuel and ammunition, when Japanese Prime Minister Shinzo Abe visits India for talks with Prime Minister Narendra Modi in mid-December, according to Japanese officials.

Tokyo and New Delhi aim to have a joint exercise involving fighter jets from Japan's Air Self-Defense Force and the Indian Air Force next year, the officials said.

It will be the fourth such drill for Japan after ones with the United States, Britain and Australia.

Speaking at the meeting, part of which was open to the media, Japanese Defense Minister Taro Kono said the launch of the talks "symbolizes a higher level of importance in Japan-India security ties in the Indo-Pacific region." 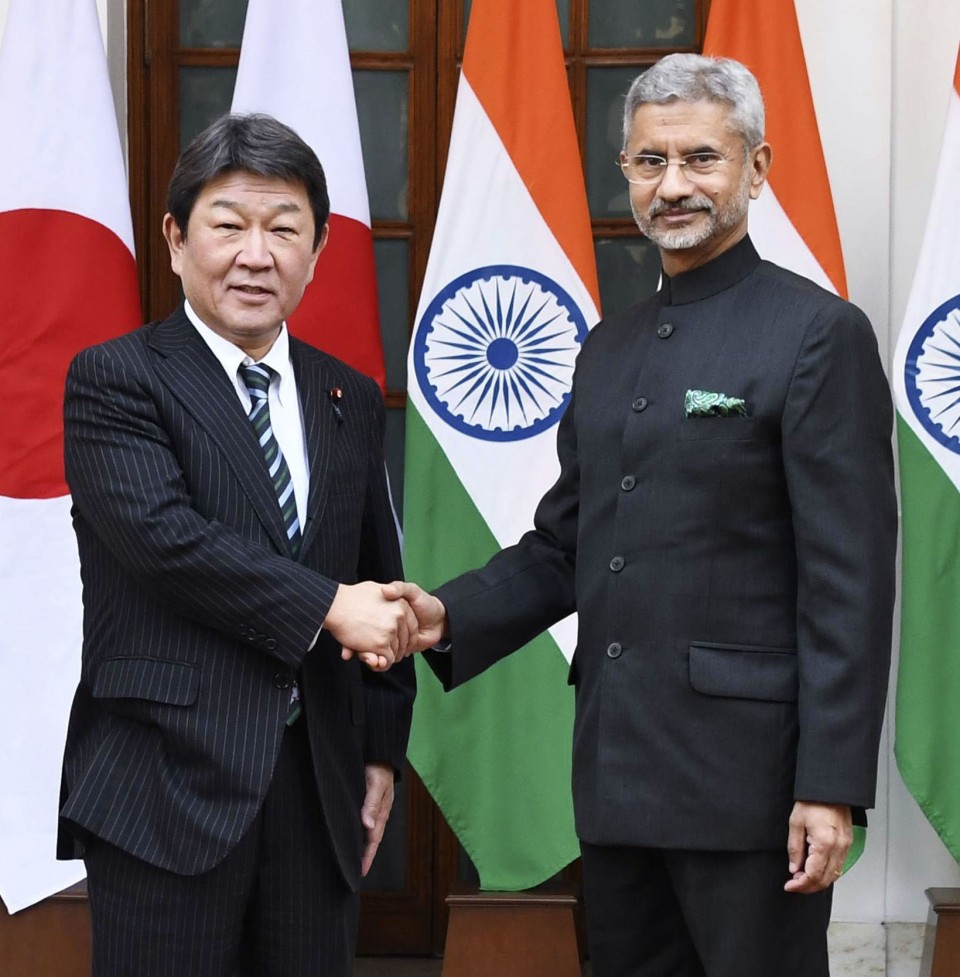 The ministers shared the vision of "a free, open and inclusive and rules-based Indo-Pacific," the statement said, in a veiled criticism of China's assertive territorial claims in the East and South China seas, as well as increased military presence in the Indian Ocean.

They called for ensuring "the principles of sovereignty and territorial integrity," taking aim at China's militarization of outposts in disputed areas of the South China Sea and Beijing's attempts to undermine Japan's control of the Senkaku Islands in the East China Sea.

They welcomed trilateral defense cooperation with the United States such as the annual Malabar maritime exercises, as well as quadruple foreign ministerial meetings also involving Australia.

They also vowed to step up joint research in the area of unmanned ground vehicle robotics.

On North Korea, the ministers "condemned" the country's launches of ballistic missiles, saying they are in "clear violation" of U.N. Security Council resolutions, according to the statement. 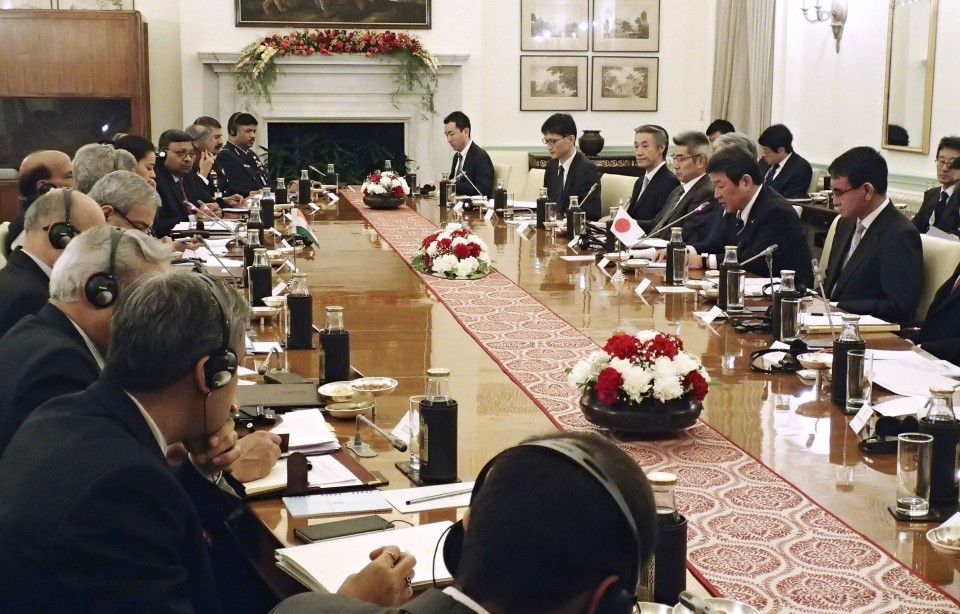 They pledged to fully enforce U.N. sanctions on Pyongyang so as to achieve its "complete, verifiable and irreversible dismantlement of all weapons of mass destruction and ballistic missiles of all ranges."

They "strongly urged" North Korea to resolve the issue of its abductions of Japanese nationals in the 1970s and 1980s "at the earliest date."

Motegi and Kono had a separate meeting with Modi on the sidelines of the two-plus-two talks.

Prior to the talks, Jaishankar said their launch "reflects the growing strategic convergence between the two countries and a common desire to further deepen bilateral security and defense cooperation."

In a written interview with Kyodo News, the minister of external affairs quoted Modi as saying relations with Japan are a "vital pillar" of India's "Act East" policy, and that the Modi government believes "there is much room to grow" in bilateral ties.

In Saturday's meeting, the four ministers decided to hold a next two-plus-two ministerial meeting in Tokyo, without specifying a date.

Japan is the second country with which India has two-plus-two security talks after the United States. New Delhi is the seventh two-plus-two partner for Tokyo.