A Hong Kong university student who had been in critical condition after suffering a fall at a car park during anti-government protests died Friday in what is believed to be the first protest-related death, local media reported.

It is unclear whether the 22-year-old student had been participating in the protests at the time of his fall in the early hours of Monday. 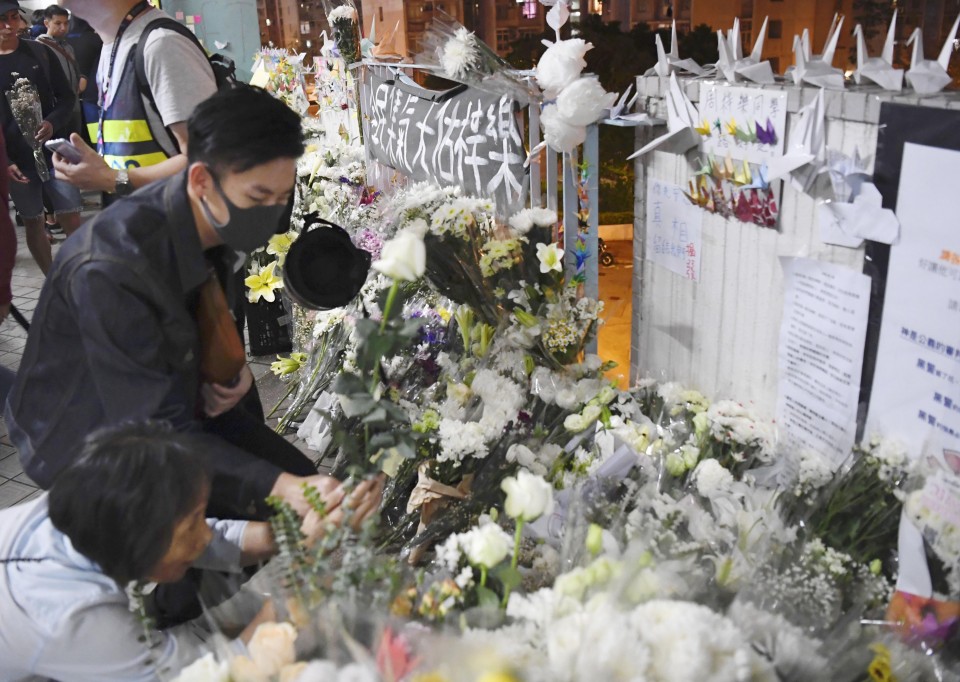 (People lay flowers in Hong Kong on Nov. 8, 2019, near where a male university student fell at a multistory car park during anti-government protests, resulting in what is believed to be the first protest-related death.)

Protesters claim he fell while trying to avoid tear gas that had been fired by police to disperse them. But the police deny any involvement in the incident, claiming he was found a substantial distance from where they had been firing tear gas.

Some local media have reported that there was no trace of tear gas fired at the car park, located in the New Territories area.

The victim was identified by local media as Chow Tsz-lok, a sophomore at the Hong Kong University of Science and Technology. He reportedly fell from the car park's third floor to the second floor.

In Beijing, Chinese Foreign Ministry spokesman Geng Shuang, at a regular press briefing, refused a reporter's question on the incident, saying, "This is not a diplomatic issue."

"It is Hong Kong's top priority to stop violence, control chaos and restore order," he added.

The young man's death is expected to further fuel anti-governments protests, originally sparked by a now-withdrawn unpopular bill that sought to allow extraditions to mainland China.

The nearly five-month-long protests have become increasingly violent, while the protesters' demands have expanded to include police accountability and democratic reform in the former British colony.