Grand champion Hakuho suffered his first loss of the Kyushu Grand Sumo Tournament on Monday, losing to rank-and-filer Daieisho in an undramatic end to Day 2 that leaves the title chase wide open.

In the final bout of the day, Hakuho swept away a high shove from Daieisho (1-1) and backpedaled to gain ground, but ran out of room at the edge as the No. 1 maegashira closed in for the kill.

The Mongolian-born yokozuna's first loss at Fukuoka Kokusai Center damaged his prospects of collecting a record-extending 43rd makuuchi title, but elated Daieisho, who beat Hakuho for the first time in five bouts.

"I'm really happy," said Daieisho, who earned his second kimboshi prize for defeating a yokozuna as a rank-and-filer.

"I gave it everything on the initial hit and was able to follow through. I just tried to focus and hit the yokozuna with my best shot." 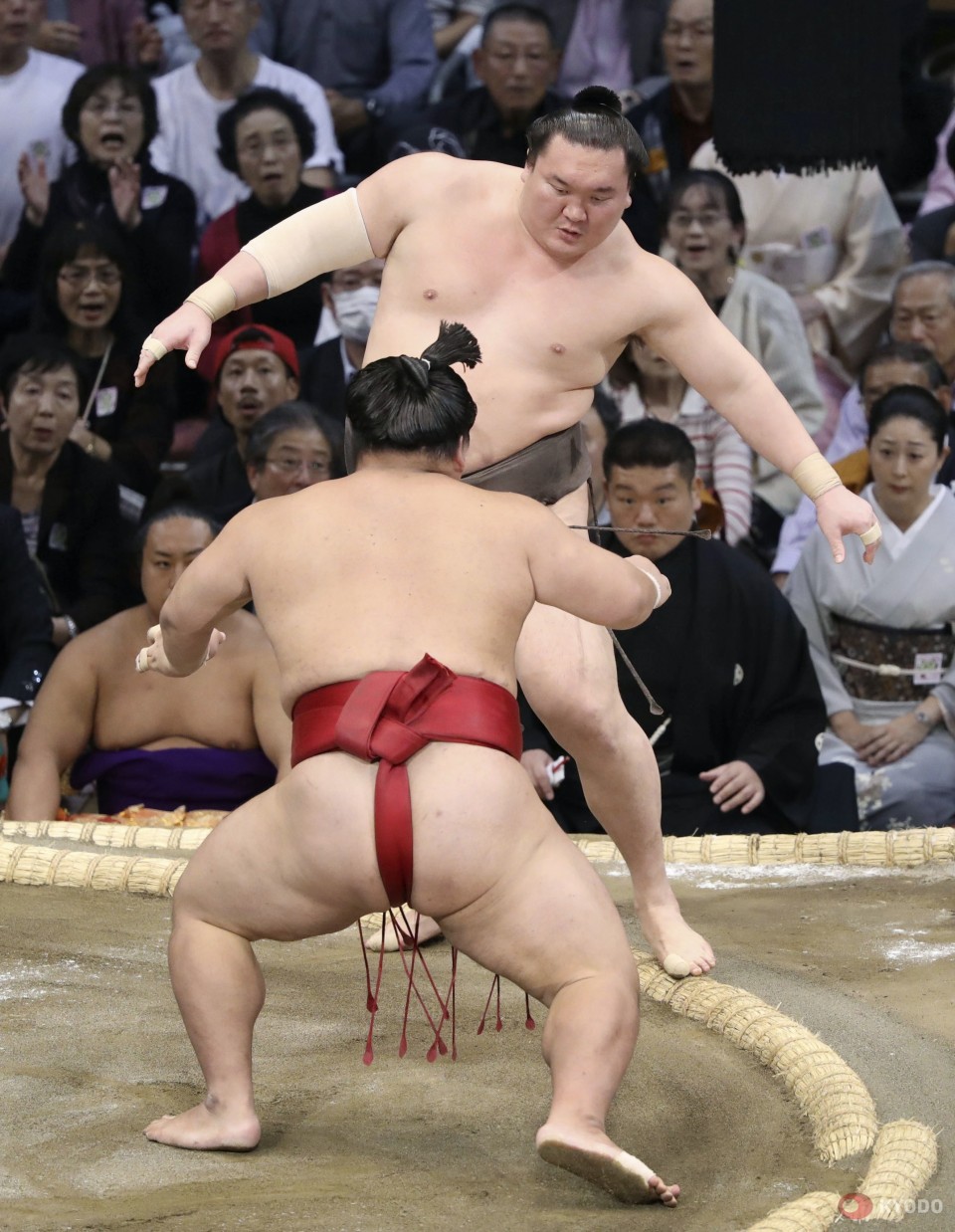 (Hakuho (back) is shoved out by Daieisho)

Hokutofuji absorbed Mitakeumi's initial blow and held his ground in a stalemate as each wrestler grappled for ground, then thrust Mitakeumi down on the ropes after the sekiwake left an opening by switching tactics and pulling away.

Ozeki Takayasu and Takakeisho also took their first losses of the tournament on Day 2.

Komusubi Abi (1-1) quickly pushed out Takayasu, who as a demotion-threatened "kadoban" ozeki needs at least eight wins here to retain his rank at the January meet in Tokyo.

New komusubi Asanoyama (2-0) got the better of his initial clash with Takakeisho after two false starts on the part of his rattled opponent, taking the re-promoted ozeki to the edge and pulling him down to the sand.

Goeido (0-2) pulled out of the tournament earlier Monday with a left-ankle injury sustained in a bout with komusubi Endo on Day 1. His scheduled opponent, No. 1 Okinoumi, earned his first win of the meet by forfeit.

The 33-year-old ozeki joins grand champion Kakuryu on the growing list of casualties among the sport's elite in Fukuoka. Former sekiwake Ichinojo decided to abstain from the year's last grand tournament as he recovers from a right shoulder injury.

In other bouts, No. 2 Myogiryu (1-1) beat sekiwake Tochinoshin (0-2) as the recently demoted Georgian struggled to finish the rank-and-filer off.

Tochinoshin latched onto Myogiryu with his favored belt grip and looked poised to deposit his opponent over the straw, but Myogiryu broke the hold at the edge while slipping to the side and pulling Tochinoshin down.

No. 2 Meisei (2-0) picked up his first win against Endo in three attempts, nimbly stepping to the side of the komusubi and launching the fan-favorite off the ring to his first loss.

Among the rank and file, makuuchi-division rookie Wakatakakage picked up his second straight win in his top-tier debut. Home favorite and former ozeki Kotoshogiku, looking to end a streak of three straight losing records, took his second loss.

Takanosho, appearing in the top division for the first time since last year's Kyushu basho, suffered his first loss, while fellow returnee Daishomaru fell to his second straight defeat.

Tomokaze (0-2) was pushed off the raised ring by Kotoyuki (1-1) and appeared to severely hurt his right knee. The 24-year-old up-and-comer was unable to stand on his own power and taken away in a wheelchair.