South Korea's decision to salvage a military intelligence-sharing pact with Japan provides relief to those concerned over a breakdown in security cooperation between the neighbors in the face of missile threats from North Korea.

But the last-minute decision to suspend the termination of the General Security of Information Agreement, or GSOMIA, far from guarantees they can settle deep-seated disagreements over wartime issues.

"I believe that there are ways to do it, but I doubt that either the South Korean or Japanese government under current leadership will be capable of agreeing" on any approach, said Scott Snyder, senior fellow for Korea studies at the Council on Foreign Relations, a New York-based think tank.

South Korean President Moon Jae In had been on the fence on whether to go through with its August decision to end the pact, which allows the exchange of sensitive information on the fly rather than going through mutual ally the United States. 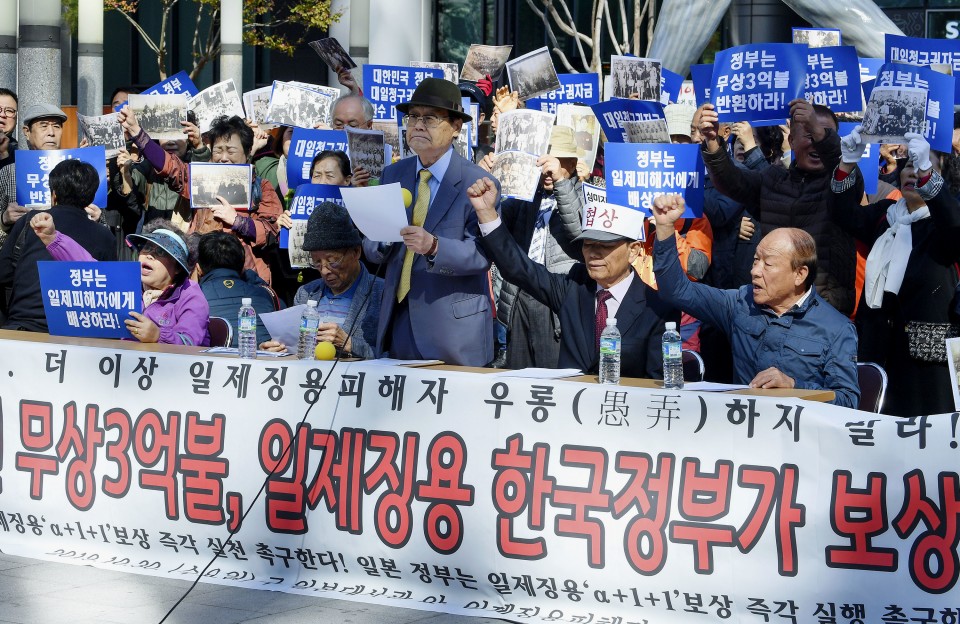 (People demonstrate in front of the Japanese Embassy in Seoul on Oct. 30, 2019, demanding compensation for forced labor during Japan's colonial rule of the Korean Peninsula.)

The move, taken in response to the decision by Japanese Prime Minister Shinzo Abe's administration to tighten controls on exports of key manufacturing materials and the removal of South Korea from a list of trusted trade partners, was backed by 59 percent of South Koreans in a Gallup Korea poll, which showed only 21 percent against.

Reversing the decision without any concessions from Japan would have dealt a political blow to the South Korean president, already reeling from the resignation of his scandal-hit justice minister, ahead of a general election next spring.

But South Korea was also under intense pressure from the United States to maintain GSOMIA. Senior officials including Defense Secretary Mark Esper and David Stilwell, assistant secretary of state for East Asian and Pacific affairs, had called for more efforts to prevent an end to the pact during recent trips to Seoul.

"In an age of missiles and high-speed aircraft, it is very inefficient to rely on the 'U.S. as middleman' approach to security cooperation vis-a-vis North Korea," said James Schoff, an expert on Japan-U.S. relations at the Carnegie Endowment for International Peace, a Washington-based think tank.

"The U.S. values trilateral cooperation highly as a signal of deterrence to North Korea and even China...Even if we can manage to maintain our capabilities with extra effort (without GSOMIA), potential adversaries might not think so, leading to less stability," he added.

Japan, for its part, had remained adamant that GSOMIA and trade controls are separate matters and should not be put on the same bargaining table.

According to a government source, Abe last week instructed national security aides not to acquiesce to Seoul's demands for trade controls to be relaxed.

With less than six hours until the pact's expiration at midnight Friday, the presidential Blue House said it would grant an extension on condition that it could cancel it at any time if newly launched discussions aimed at easing the trade controls did not pan out.

"I think the diplomatic calculus in Seoul revolved around a recognition that South Korea was about to become hamstrung by an artificial deadline," said Snyder, the Korea analyst. 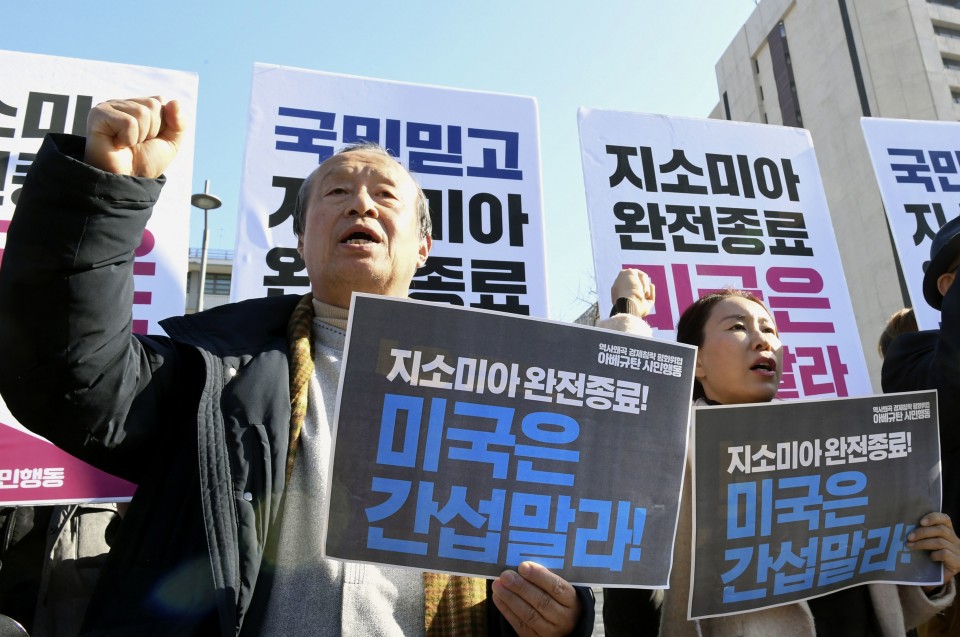 (People take to the streets in Seoul on Nov. 22, 2019, calling for the abolition of the General Security of Military Information Agreement, a military intelligence-sharing pact between Japan and South Korea.)

"There is now space to address constructively some outstanding issues that are currently dividing South Korea and Japan."

One of the major sticking points is compensation for wartime workers during Japan's colonial rule of the Korean Peninsula between 1910 and 1945. The recent flare-up in tensions between the neighbors was sparked by South Korean court rulings ordering Japanese companies to pay victims for their suffering.

Japan argues that the rulings go against a 1965 bilateral agreement, when the countries established diplomatic ties, that purported to settle the issue with a $500 million lump sum provided to South Korea as "economic cooperation." Seoul says its hands are tied because of the separation of powers.

While Japanese Foreign Minister Toshimitsu Motegi told reporters late Friday that the compensation issue remains "the biggest problem" between the countries, South Korea made no mention of it in announcing the extension of GSOMIA.

Seoul has taken no specific action on the rulings but one proposal is the creation of a fund that would accept donations from Japanese and South Korean companies and the public to compensate the plaintiffs in the wartime labor cases.

But the suggestion by Moon Hee Sang, the head of South Korea's parliament, has drawn a backlash from both sides, with lawyers for the plaintiffs saying it lets Japan off the hook without a sincere apology.

"This will not be an easy issue to resolve," said Snyder.