Efforts are being initiated to familiarize the Japanese public with the rules of para sports through simulations using advanced technologies and live radio commentary ahead of next year's Tokyo Paralympics.

Those involved in the projects believe the wider exposure could not only make para sports more fun to watch for the uninitiated but also encourage spectators to frequent more venues once they have become used to the various rules and scoring systems. 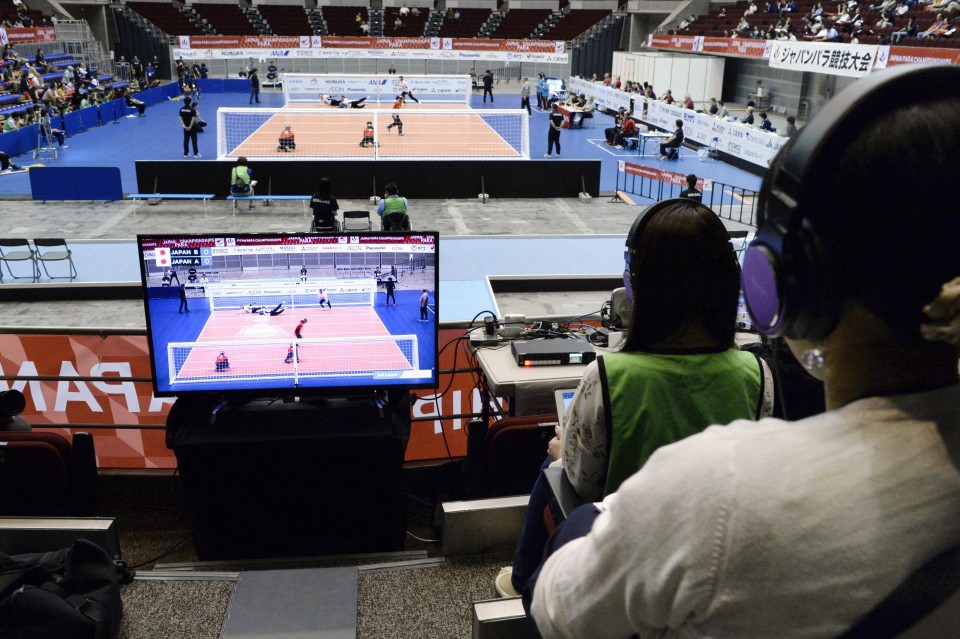 (Spectators don headphones so they could listen to the on-court comments of players and view the action on an arena screen.)

At an international goalball tournament in September held in Chiba Prefecture, east of Tokyo, a sign went up, asking spectators for silence during play. As a rule, spectators of goalball must be quiet during the action so that players can hear the ball and each other, but cheering is allowed when a goal is scored.

Developed as a rehabilitation activity for soldiers who returned from World War II, goalball is contested by two teams of three visually impaired players who wear eyeshades, aiming to throw a ball with embedded bells into their opponent's goal.

Spectators donned headphones at the Chiba tournament so they could listen to the on-court comments of players and viewed the action on an arena screen.

The sound of the ball, shouts back and forth from the players and even the sound of stomping feet, used in a feint to confuse an opponent, were all picked up by the court microphone and delivered to onlookers.

Some in the audience watching the sport dubbed the "silent battle," viewed the action on large monitors placed in front of the spectators' seats. Noise coming from different parts of the court can also be visualized instantly on the screen, represented by various colored wave effects.

"I thought it would be difficult to get excited being that this is a quiet sport, but I could really see how the ball moved around by listening to the sounds with the headphones," said Kunitoshi Miyazaki, 47, who watched the game live for the first time. "I felt as if I was a player on the court and really got into it."

For example, the organization has devised a system to explain the rules of the para sport boccia, a precision ball sport played by athletes with severe physical disabilities. The aim is to throw leather balls as close as possible to a white target ball, or jack.

A camera films the court from above and uses imagery that can measure ball positions with remarkable accuracy. The images are displayed on a screen in real-time, allowing spectators to understand the rules and scoring of the game intuitively.

"We want to use technology so people can enjoy the feeling of actually being part of the action," said Kimihiro Takano, a spokesperson for the organization.

For blind soccer, a variation of futsal designed for blind or visually impaired players, all contestants are blindfolded except for the goalkeepers.

With players relying on a jingling sound made by the ball, each other's voices and shouts from the goalkeepers, stadium announcements of the rules of play tend to slow the progress of the game.

Originally, FM radios broadcasting live commentary were lent out to the blind and visually impaired, but the handsets, which include earphones, were well received by spectators viewing blind soccer for the first time.

Now, it is not uncommon for more than 100 radios to be lent out at matches to both the visually impaired and sighted, according to the Japan Blind Football Association.

"There are similarities with futsal, but we have fences on both sides of the pitch, and we have unique rules such as the second penalty kick, so it's easier for people watching for the first time to understand the game listening to live commentary," said the association's Daisuke Miyajima.

"We'd like to keep making efforts that will get more spectators, including those who are disabled, coming out to watch the games."