South Africa won their third Rugby World Cup final Saturday, beating England 32-12 in a display that was based on brute force and finished off with blinding speed.

The Springbok pack, with man-of-the-match Duane Vermeulen to the fore, dominated from the start, allowing Faf de Klerk and Handre Pollard to dictate the course of the game as England, who had looked so good in their semifinal win over New Zealand, ran out of steam and ideas.

"I honestly can't explain my feelings," said Kolisi, whose side eliminated hosts Japan in the quarterfinals. "To see the joy in my teammates' faces was the best thing for me." 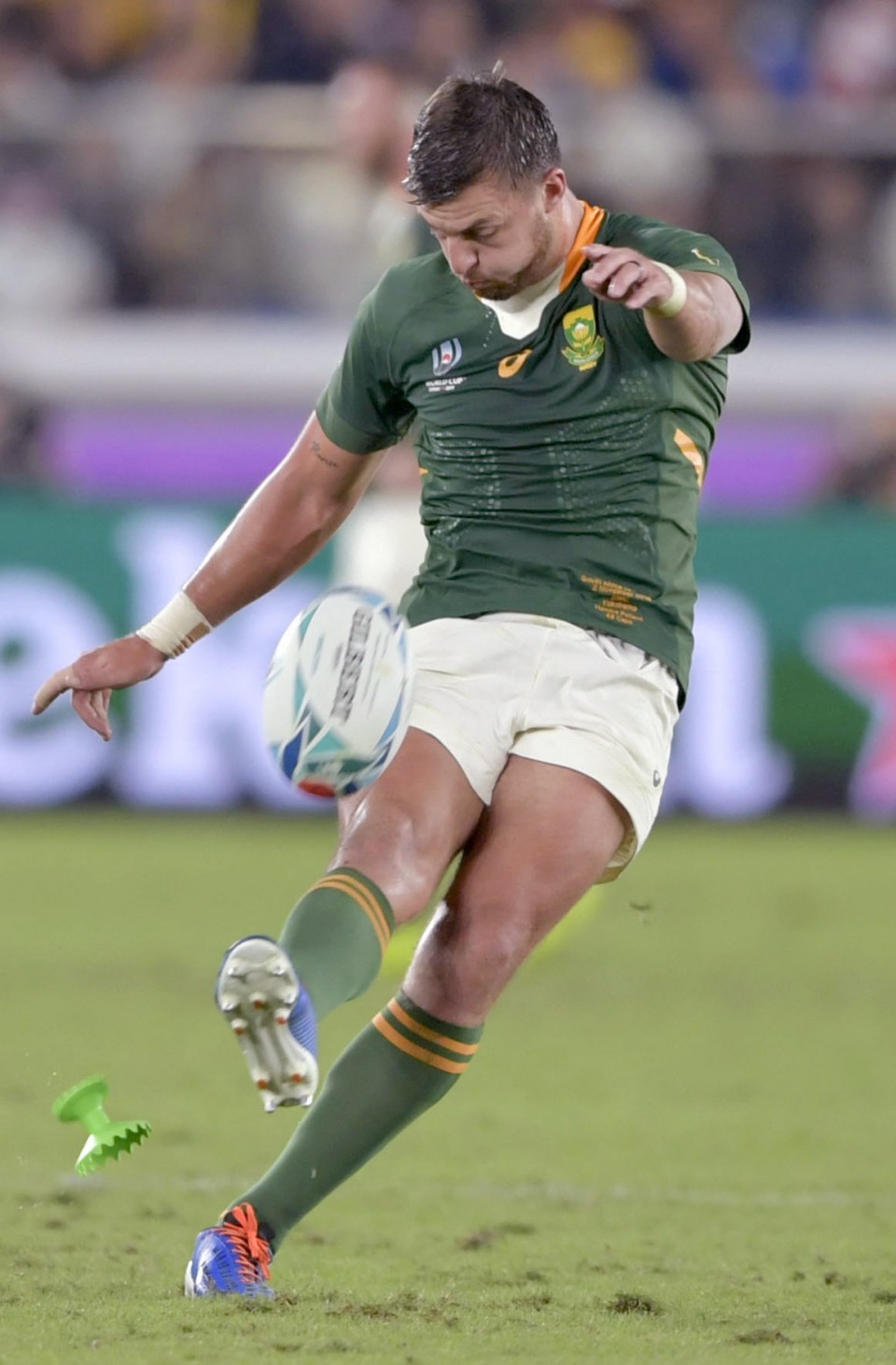 Vermeulen, who plays in the Top League for Kubota Spears, praised the work of his fellow forwards, both the starters and finishers.

"We know we had to do something at the breakdown. In a way we got a few turnovers, they got a few, and it's fantastic to walk away with this win," he said.

Played under ideal conditions in front of 70,103 at International Stadium Yokohama (Nissan Stadium), near Tokyo, South Africa used their power to dominate the scrums and keep England on the back foot throughout the contest.

The loss deprived England coach Eddie Jones of World Cup glory in the country of his wife's birth and mother's ancestry.

"South Africa were worthy winners and were too good for us," said Jones. "We struggled to get into the game and didn't take our opportunities." 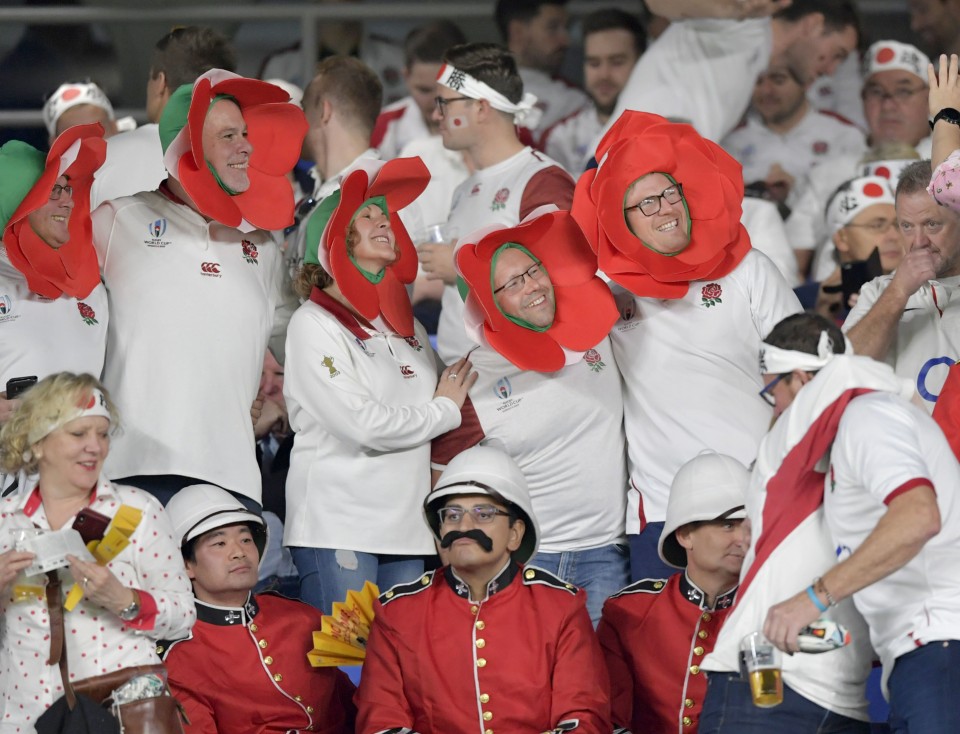 The early stages of the game unfolded in unwanted fashion for both teams. Pollard had a chance to give South Africa the lead just two minutes into the match, but his penalty kick drifted to the right, before England prop Kyle Sinckler was helped from the field following some lengthy treatment from the medics.

While Pollard's miss proved to be a momentary lapse, the loss of Sinckler set the tone of the evening for England.

With the team in white taking time to adjust to their early replacement, it was the Springboks who took control, helped by some unforced errors from their opponents.

From one such mistake right in the front of their posts, Pollard eventually got the scoreboard ticking over in the 10th minute.

South Africa came into the match with a side considered capable of arm wrestling, but which might struggle if forced to play catch-up rugby.

With England looking nervy, the first half fell into the hands of the Springboks, particularly at set-piece time as they won a succession of penalties.

Pollard added three more penalties, though England -- who had their moments with ball in hand, only to be thwarted by some superb Springbok defense -- stayed in touch with two kicks from Owen Farrell to go into halftime down 12-6.

England had had the edge in territory and possession -- 62 percent and 58 percent, respectively -- but came up against a defense that missed just six of 85 tackle attempts.

They went into the interval with the weight of history against them, with no team trailing at halftime of a World Cup final having ever gone on to win. 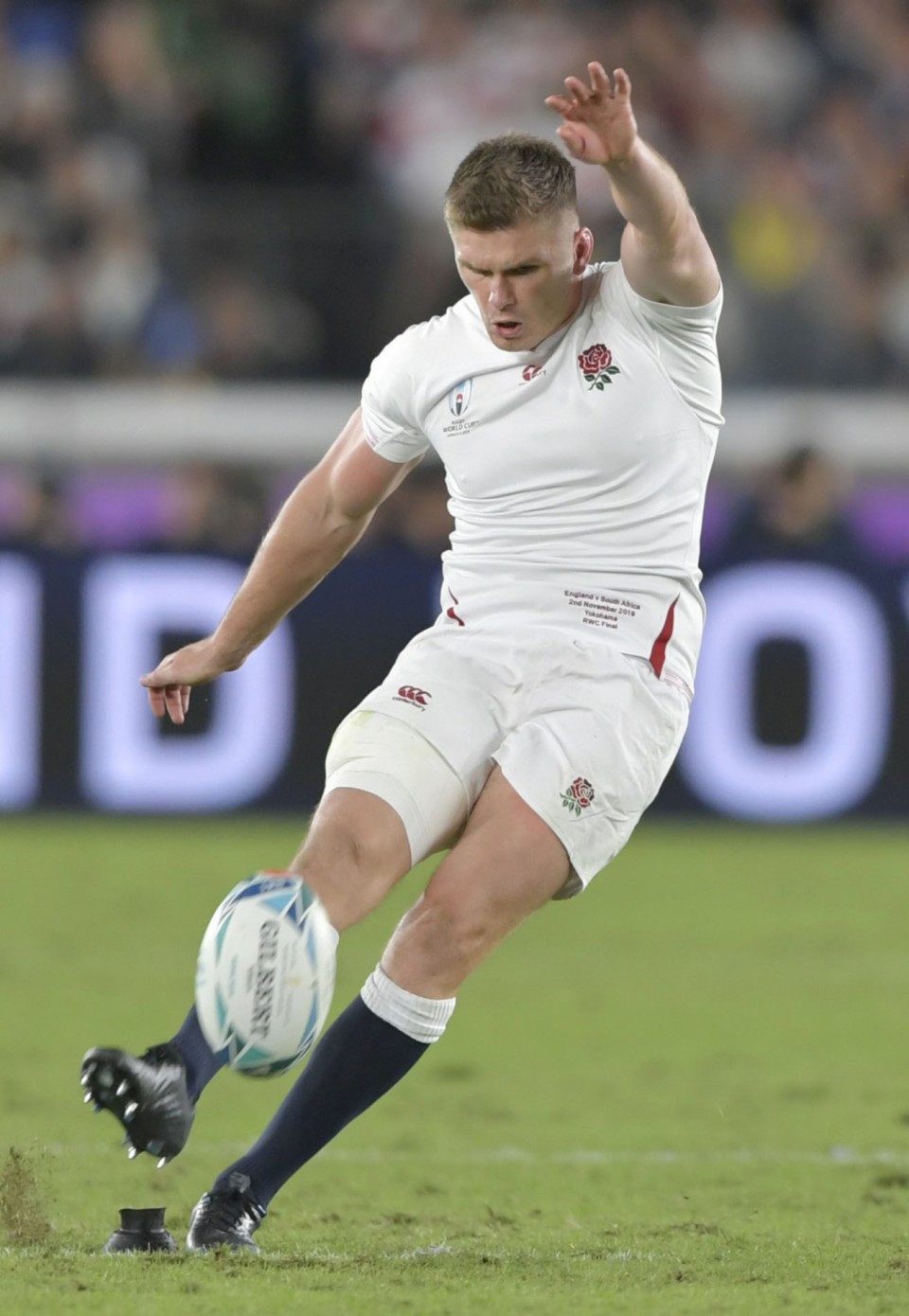 The youthful England side -- whose starting XV had an average age of 27 years and 60 days, the youngest to start a World Cup final in the professional era -- needed a spark.

Instead they continued to make mistakes, and the Boks kept punishing them in the scrum.

"We knew what we needed to do," said Kolisi. "Coach Rassie (Erasmus) just told us to keep it simple."

Two more penalties from Pollard and Farrell saw South Africa lead 18-12 with 20 minutes left on the clock as the kickers and defense continued to dominate proceedings. 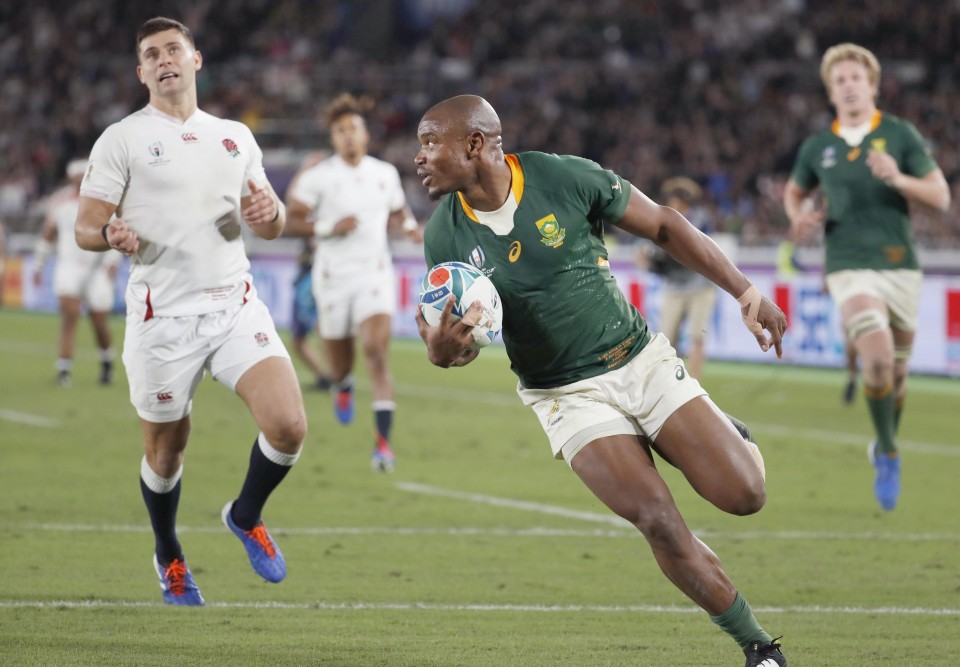 With six points separating the teams, England were still in the game. But the Springboks had other ideas, as Lukhanyo Am regathered a kick from Mapimpi before passing back to the wing to score, recording South Africa's first-ever five-pointer in a World Cup final.

England had 12 minutes to score 13 points to force the game into extra time.

But it was Kolbe who rounded off the scoring as he used his pace to get past a dejected England defense.

"At 50 minutes we were still in the game but failed to take our opportunities, and in the second half they took theirs and that was the difference in the game," said Jones.

Erasmus, who steps down as head coach to concentrate on his role as South Africa's director of rugby, praised the self-belief shown by his players as they became the first team to win the World Cup after losing a pool game.

"The boys believed in themselves," he said. "We got so much respect for England, we really prepared well and I think we fought hard till the end." 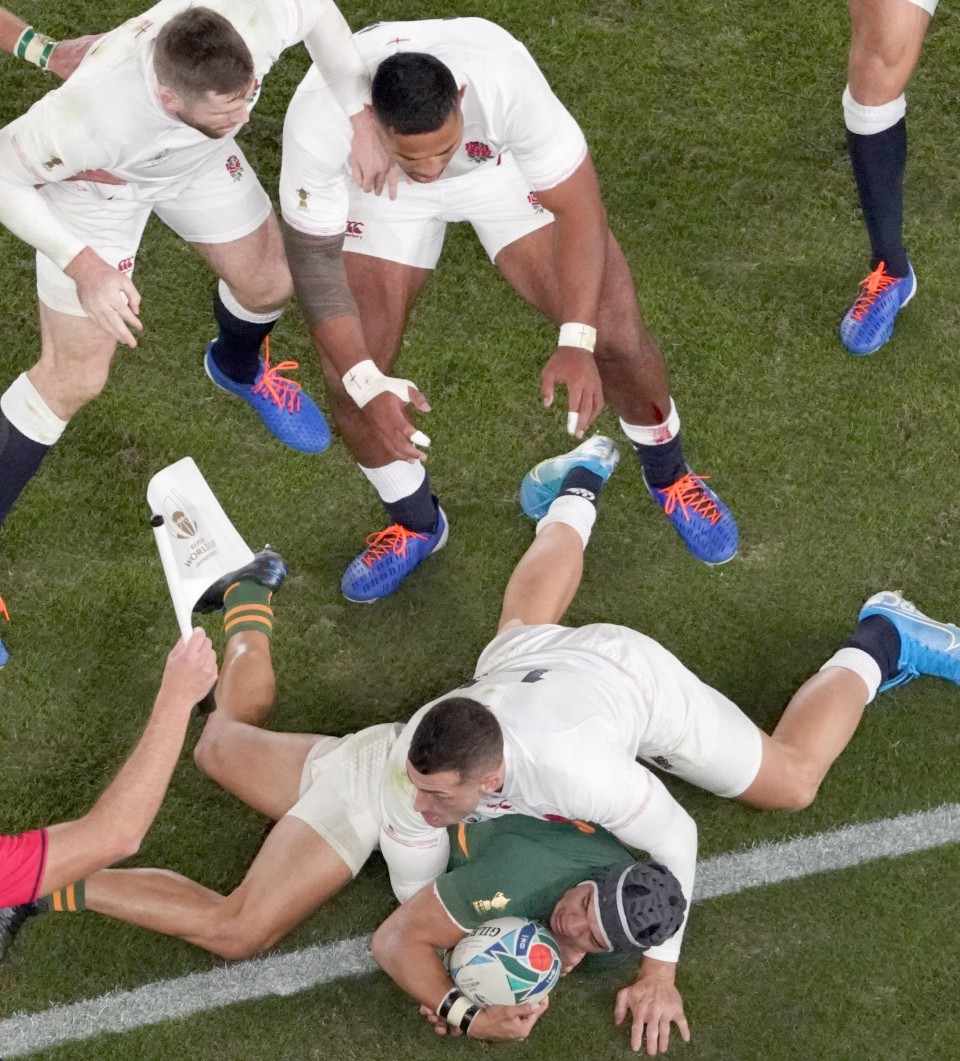 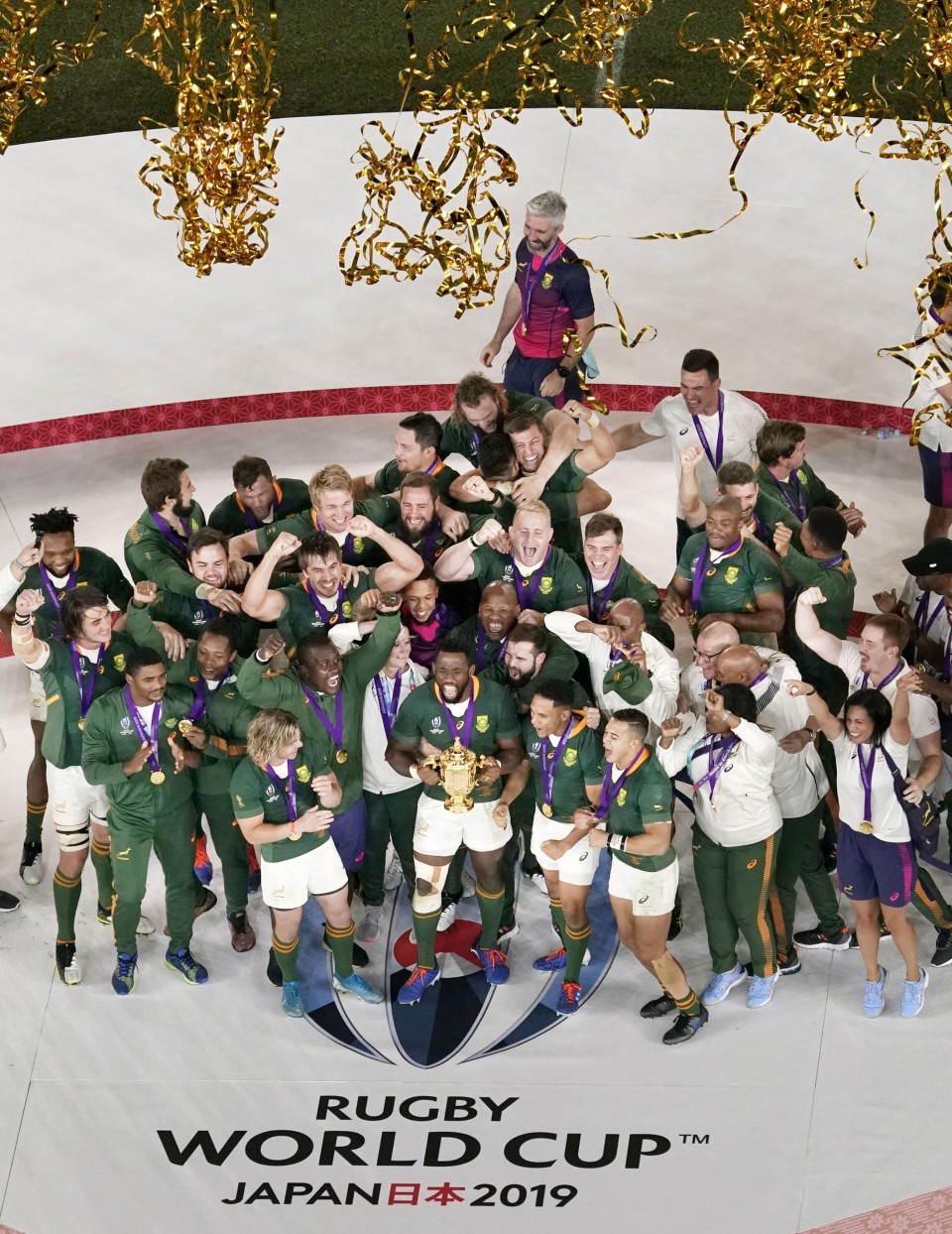