An Asian art museum in the U.S. capital on Saturday kicked off the first exhibition in over a decade showcasing many of the paintings and sketches from its extensive collection of works by Japanese ukiyo-e master Katsushika Hokusai (1760-1849).

The yearlong exhibition at the Freer Gallery of Art, featuring approximately 120 works by one of Japan's most iconic painters, was launched partly in celebration of the 2020 Tokyo Olympics, according to the museum in Washington. 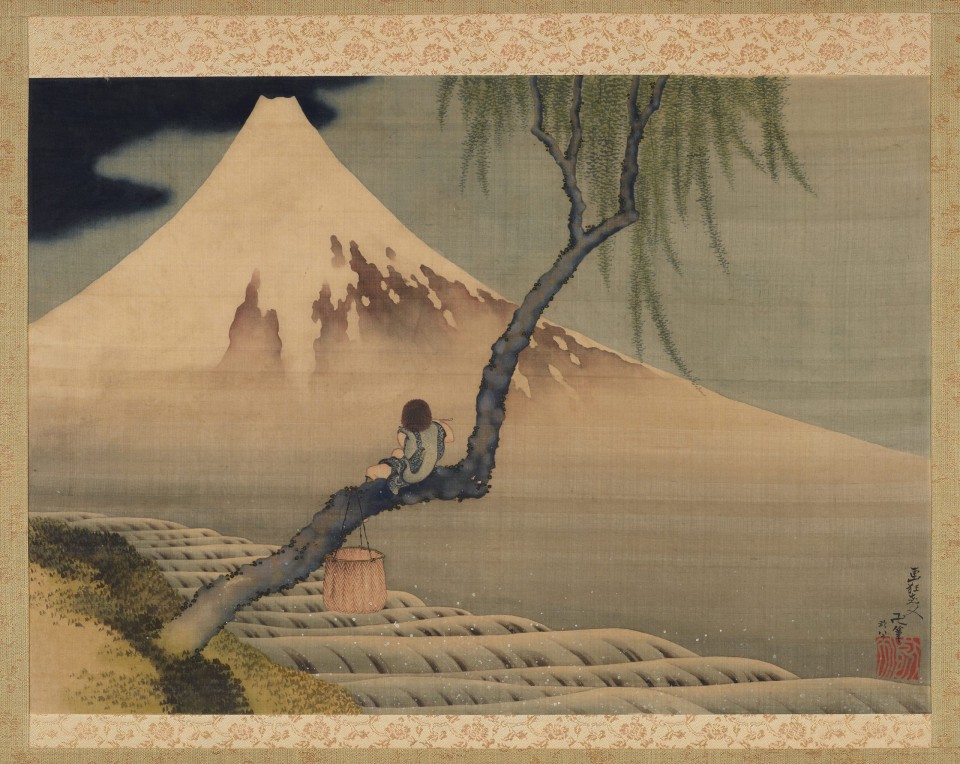 ("Boy Viewing Mount Fuji")[Courtersy of the Freer Gallery of Art]

"Hokusai: Mad about Painting" offers visitors a rare chance to see the extent of the museum's Hokusai collection, which it said is not loaned to outside institutions at the desire of the museum's late founder Charles Freer.

Among the works to be put on display include hanging scroll paintings like "Thunder God," made near the end of the artist's life, depicting the deity with red skin against dark clouds.

Another hanging painting, "Boy Viewing Mount Fuji," shows a youth sitting in a tree and gazing at the mountain. The piece was confirmed by new imaging technology to be Hokusai's work after previous scholarly debate over its attribution.

"Scholars -- particularly those coming from Japan -- are always struck by the vibrancy of the colors of Hokusai's works in our collection," Frank Feltens, a specialist in Japanese art who oversaw the exhibit's creation, said at a press preview on Wednesday.

The last major exhibit of the museum's Hokusai collection was in 2006.

("Thunder God")[Courtersy of the Freer Gallery of Art]

According to Feltens, the museum's in-house conservation studios work to ensure the preservation of each piece in the Hokusai collection. The objects are only allowed to be displayed for six months at a time in order to prevent fading.

Next May, the items in the exhibit will rotate in order to show as much of the collection as possible.

Japanese Ambassador to the United States Shinsuke Sugiyama welcomed the show's launch and its potential reach among visitors.

"The embassy is hoping the exhibit will increase interest and curiosity about Japan, especially as we go into the year when Japan will host the 2020 Olympics and Paralympics," he said at the press preview.

Visitors can also view books called "Hokusai Manga" with sketches of everyday scenes during the artist's life in the Edo Period (1603-1868), including an instructional manual for traditional dance. In addition to the physical books behind glass, there is a digital reader for viewing each page in detail.

Also on display are rare preparatory drawings for woodblock prints, called hanshita-e, which were usually destroyed by the carving process.

Though the museum does not contain the most famous of Hokusai's paintings, "The Great Wave off Kanagawa," the exhibit will display an enlarged print of a 1,000 yen ($9) Japanese banknote depicting that painting, slated for release in 2024.

The exhibition on Hokusai will run through Nov. 8, 2020. Admission is free of charge for the museum, which is part of the Smithsonian Institution.

("Descending Dragon")[Courtersy of the Freer Gallery of Art]

("Ascending Dragon")[Courtersy of the Freer Gallery of Art]