Grand champion Hakuho flattened new komusubi Asanoyama on Tuesday to recover from his first loss of the Kyushu Grand Sumo Tournament, while a trio of rank-and-filers jumped out into the lead.

Hakuho (2-1) took charge from the start of the final bout on Day 3 of the meet in Fukuoka, drilling Asanoyama (2-1) back before twisting him down and landing on May's champion for good measure.

The Mongolian-born yokozuna had his record blemished after stepping out of the ring against top-ranked maegashira Daieisho on Monday.

Asanoyama had been the last of the elite to hold a perfect record as upsets and injuries continue to thin out the upper ranks at Fukuoka Kokusai Center. 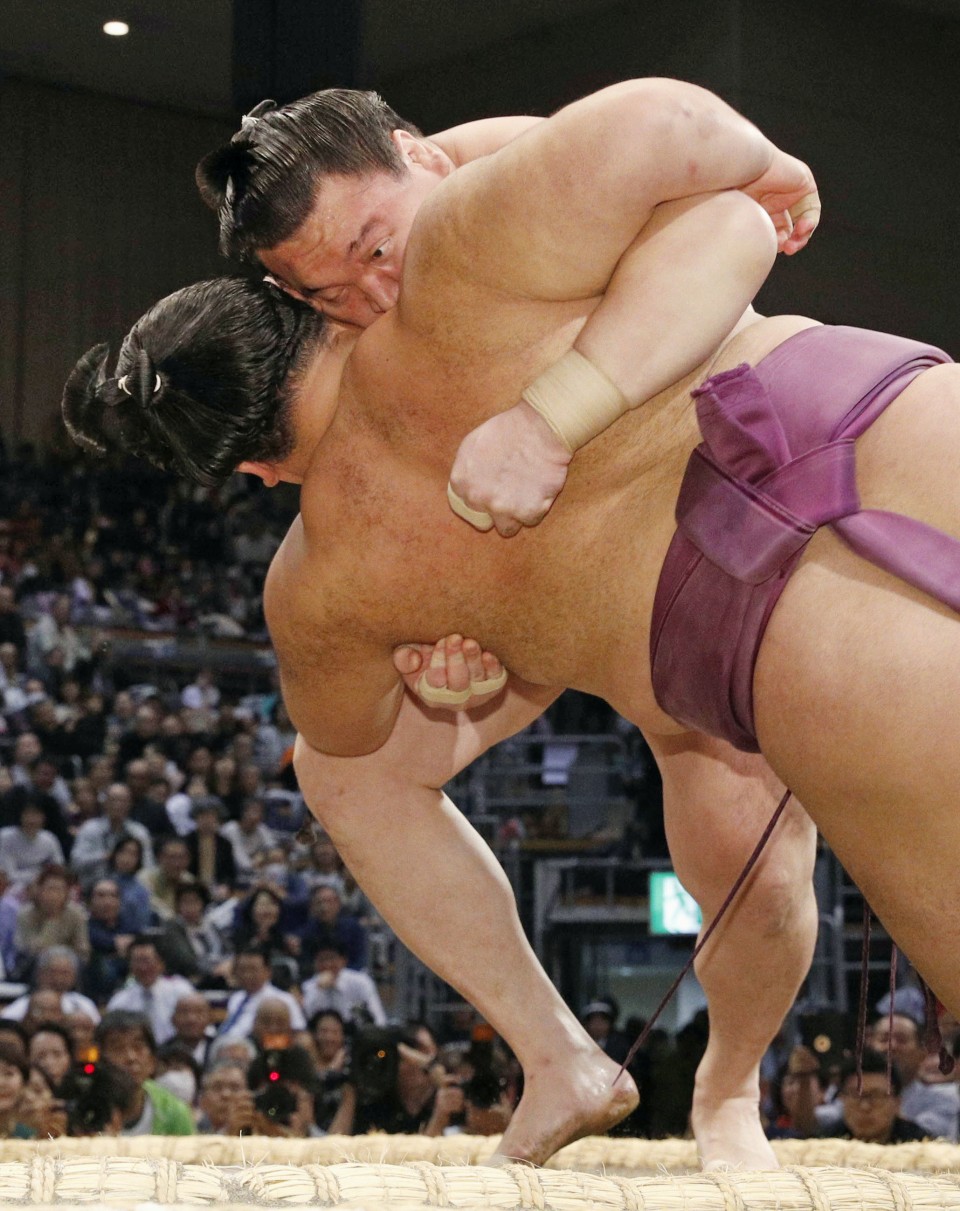 (Hakuho (back) and Asanoyama)

Only three wrestlers remain undefeated with 12 more days to go. No. 9 Yutakayama and No. 10 Shodai split the lead with No. 16 Wakatakakage, a makuuchi-division newcomer, while 21 men sit one win off the pace in a wide-open race for the Emperor's Cup.

In other bouts, the ozeki pulled off narrow wins to bounce back from Day 2 defeats. Takakeisho (2-1) yanked down No. 1 Daieisho (1-2) before falling off the dohyo, and Takayasu (2-1) touched down after No. 1 Okinoumi (1-2) as both wrestlers tried to throw each other out.

Both sekiwake also prevailed on Day 3, with Mitakeumi (2-1) absorbing a bloody blow above his right eye before forcing out No. 2 Meisei (2-1). Tochinoshin (1-2) slapped down komusubi Endo (1-2) to pick up the first of 10 wins needed here to regain ozeki status. 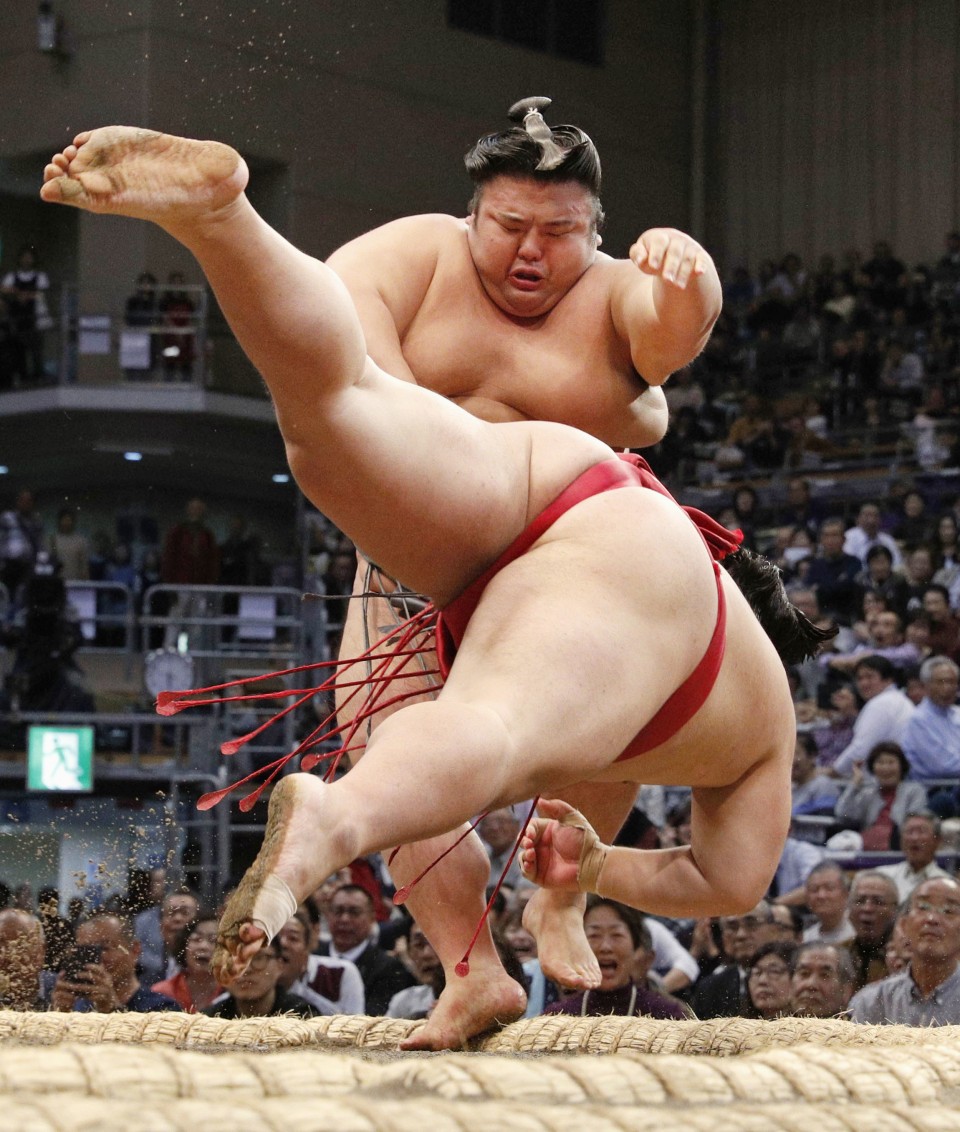 (Takakeisho (back) and Daieisho)

Prior to the day's bouts, No. 3 Tomokaze (0-3) withdrew from the tournament after sustaining a serious right knee injury when he was pushed off the dohyo in his Day 2 bout with No. 4 Kotoyuki (2-1).

According to his Oguruma stablemaster, it will "take at least a year" for the up-and-coming maegashira to fully recover from the dislocated knee and ligament damage.

"I figured it would happen someday," Oguruma said. "I told him to change his sumo and his mindset. He just has to accept reality and start over. Everyone gets injured and comes back. He'll do it. I believe in him." 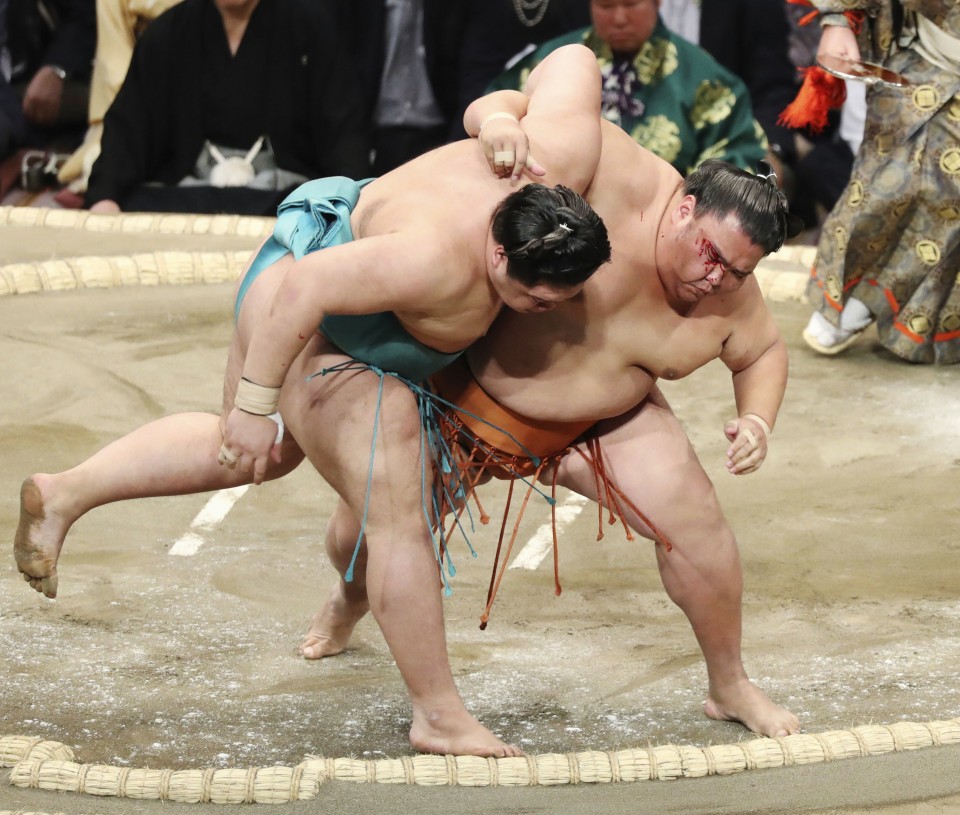 The 24-year-old from Kanagawa Prefecture reached the top division in March, less than two years after making his professional debut in May 2017.

Tomokaze is the fifth wrestler in the top two divisions to pull out of the year's final grand tournament, following yokozuna Kakuryu and ozeki Goeido.