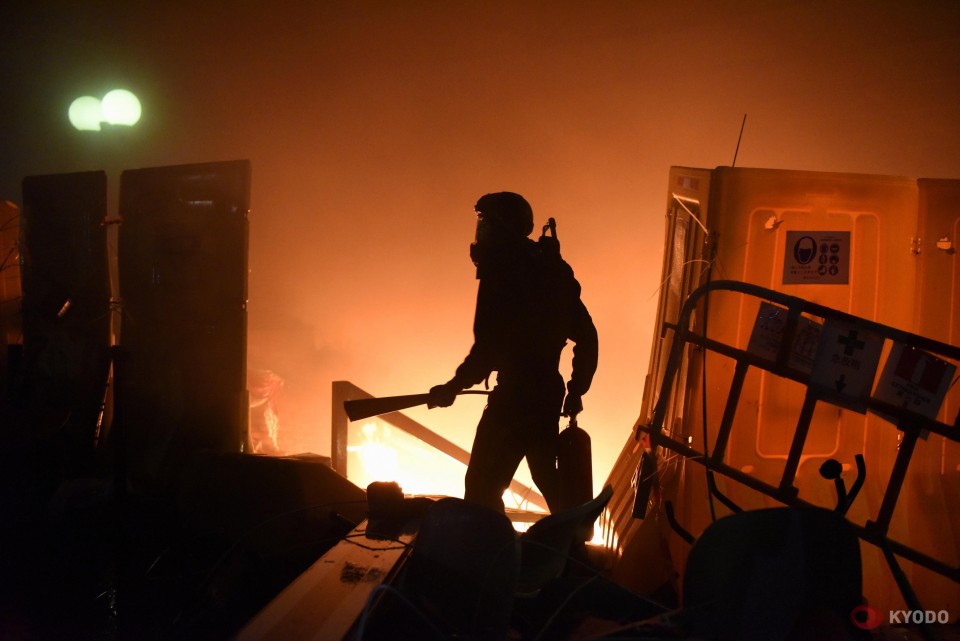 HONG KONG - Hong Kong police on Monday demanded that hundreds of protesters who retreated into a university campus after a day of clashes surrender themselves, while confrontations between police and protestors continued through early Tuesday.

The Hong Kong government warned that continued unrest could jeopardize local elections scheduled for Sunday. If the election is put off, however, it will likely fuel anger among protesters and could develop into further escalation of social unrest in the autonomous region.

Police broke up barricades placed on roads leading to the Hong Kong Polytechnic University in the Kowloon area following a night of confrontation in which anti-government protesters hurled petrol bombs and bricks at police, while police fired tear gas and deployed a water cannon truck and an armored vehicle to disperse the crowd.

"(The protesters) have committed grave crimes, they have used lethal weapons, launched deadly attacks, not just to my fellow officers but also to members of the public (who helped remove debris on the road)," police regional commander Cheuk Hau-yip told reporters.

"These rioters...have to face the consequence of their acts. Other than coming out to surrender, I don't see at the moment any viable option for them," he said, but added it is not yet urgent for police to raid the campus. 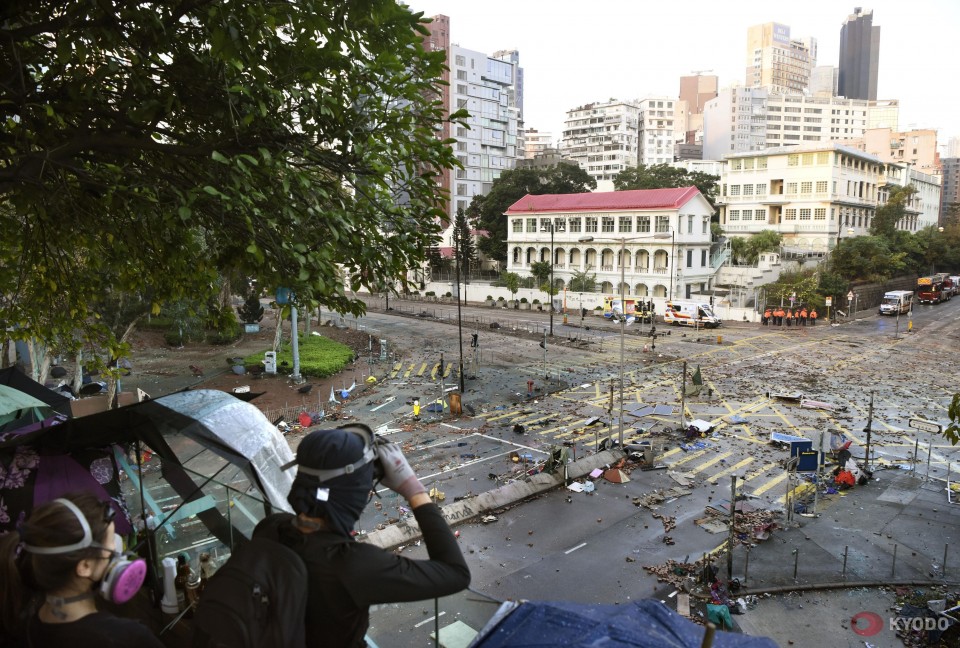 Secretary for Security John Lee also warned that protesters remaining on the campus will be arrested for "rioting." He said a medical team formed by the Red Cross was deployed at the campus to assist those in need, while social workers and clinical psychologists have been sent in to help underage protesters surrender to police.

According to a Japanese government source, a Japanese man in his 20s was arrested on Sunday near the Hong Kong university campus. The details of his charge were not known.

As police surrounded the campus, a footbridge connecting it and the nearby Hung Hom train station as well as a barricade set up at the university entrance were set on fire between Sunday night and Monday morning to stop police from entering.

The police denied storming the campus on Monday morning, saying they were conducting a "dispersal and arrest" operation. They also denied reports that they fired tear gas at protesters who were trying to leave the campus, claiming the smoke came from burning debris elsewhere.

At least nine protesters who fled to a nearby park and more than 100 others who apparently wanted to support protesters inside the campus have been arrested, local media said.

The arrested were among the crowd rallying throughout the day in districts near the campus in response to calls for support on social media.

Thousands of people who filled the streets in nearby the Yau Ma Tei, Jordan and Tsim Sha Tsui areas by nightfall were dispersed by police firing an enormous amount of tear gas as well as using other non-lethal weapons.

Some protesters attempted several times to flee the campus on Monday morning but were forced back by police with tear gas, pepper balls, sponge grenades, rubber bullets and water cannon. Dozens ran into a police cordon while fleeing and some were wrestled to the ground, local TV footage showed.

At least 24 people were injured, four of them severely, in a clash between police and protesters on Monday, according to hospital authorities.

Ken Wu, a university student union representative who is among the roughly 500 protesters who remain inside the campus, said some of them have developed rashes or are suffering hypothermia from the water cannon and need medical attention, according to the RTHK report.

The Cross-Harbour Tunnel near the university, which is one of three major tunnels connecting Kowloon and Hong Kong Island and has been blocked by protesters since Wednesday, remained closed to traffic.

All primary and secondary schools remained closed Monday and will be suspended until Tuesday, while kindergartens will be shut for the week, Hong Kong's Education Bureau said.

For the District Council election to be held as scheduled Sunday, Constitutional and Mainland Affairs Secretary Patrick Nip said calm must be restored and roads reopened.

"It would be the violent demonstrators' fault if the election needs to be canceled or postponed," Nip told reporters. "If they continue to threaten candidates or voters, block roads and damage transportation facilities, the risk of rescheduling the election will rise."

Voting would be postponed for a week should there be disruptions on election day, he said.

The United States condemned the "unjustified use of force" in Hong Kong and called on the Chinese government "to protect the territory's freedom, legal system and democratic way of life," Reuters reported from Washington, citing a senior U.S. official.

"We condemn the unjustified use of force and urge all sides to refrain from violence and engage in constructive dialogue," the official was quoted as saying Sunday.

Meanwhile, the territory's High Court on Monday struck down as unconstitutional a new law banning people from wearing face masks at demonstrations, saying it is too restrictive and tramples on their fundamental rights.

Chief Secretary for Administration Matthew Cheung declined to comment on the ruling, or whether it will file for appeal. Police spokesman Li Kwai-wah said for the moment police will cease enforcing the anti-mask law, while adding that three people had been arrested purely for breaching the law and of them only one was charged.

Including the 154 people arrested over the weekend, police have since June -- when the series of demonstrations began -- arrested nearly 4,500 people for crimes including rioting, possession of weapons, arson and assaulting police.

The protests sparked by a now-withdrawn bill that sought to allow extraditions to mainland China have been ongoing since June, presenting the Hong Kong government with its biggest challenge yet since the handover. 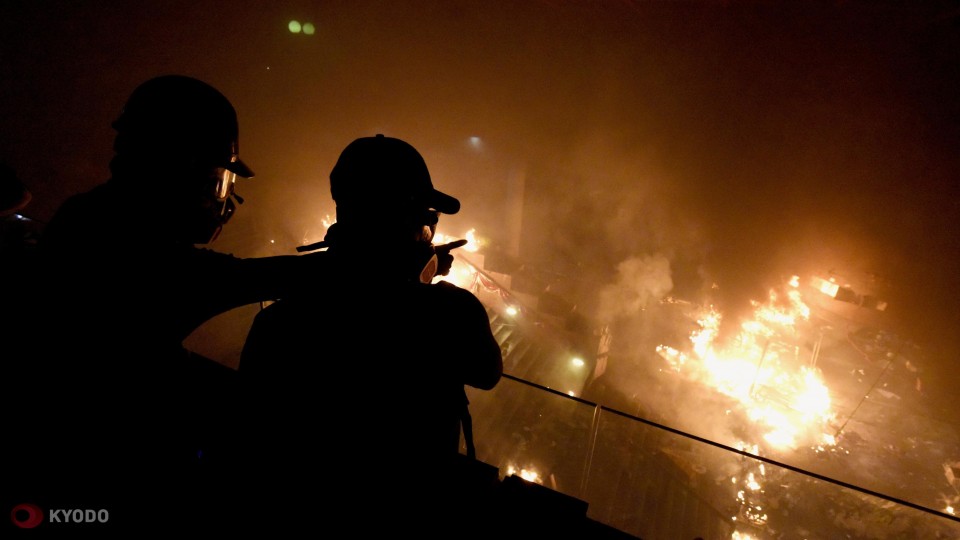 (Fire inside Polytechnic University during the early hours of Nov. 18, 2019) 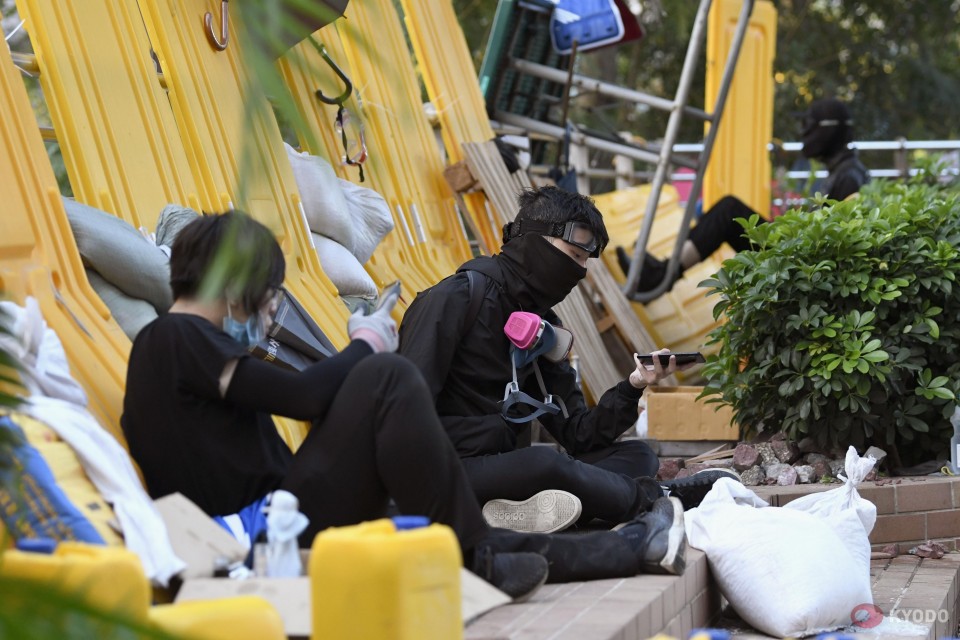 (Protesters in Polytechnic University rest near a barricade) 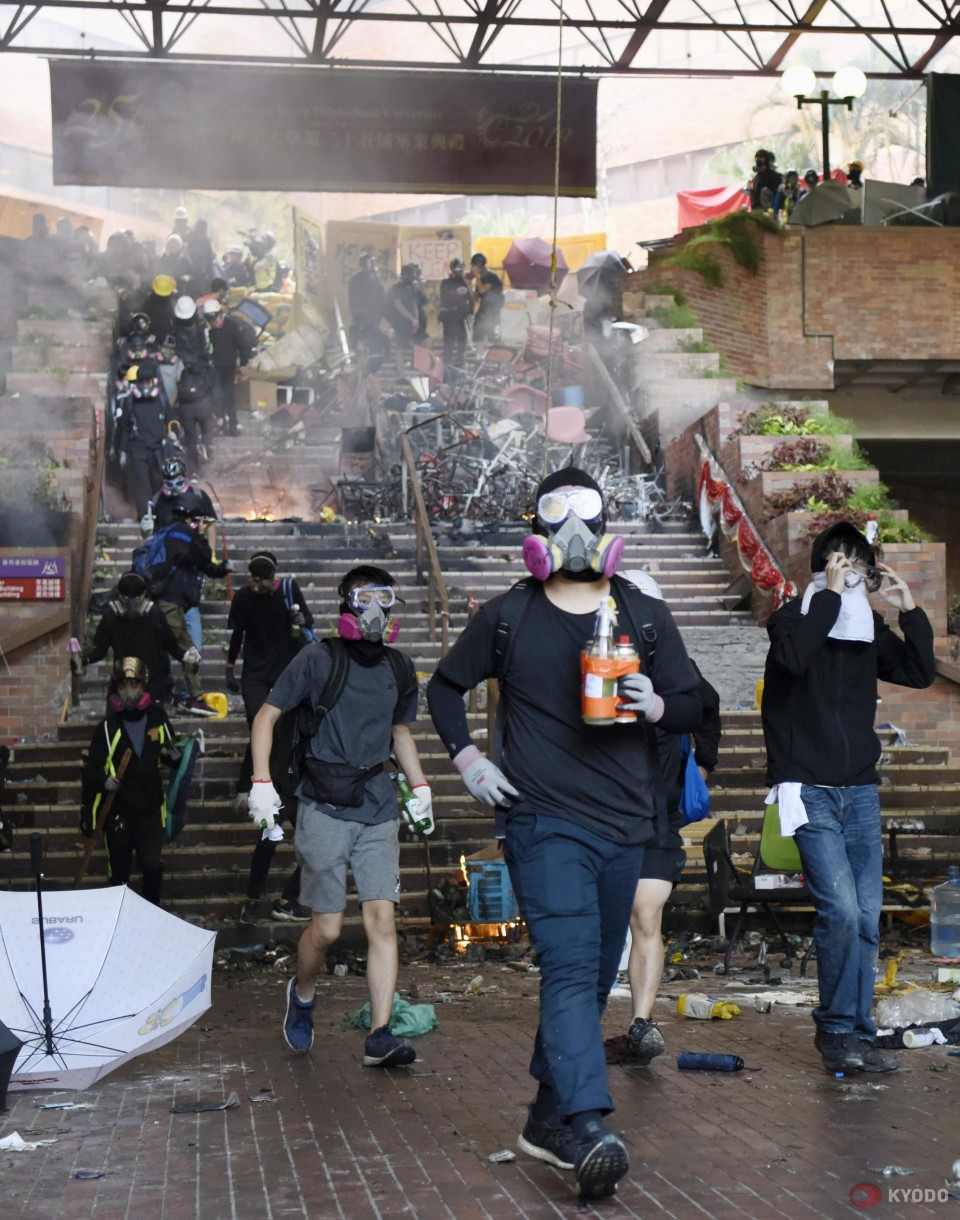 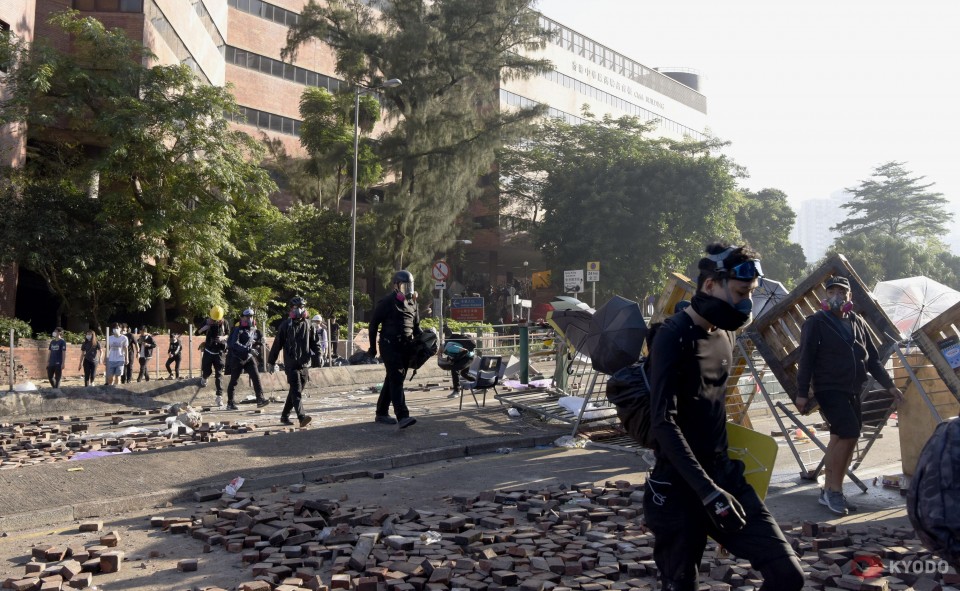